An official said that it was even more heartwrenching as the child was "living just like the animals." 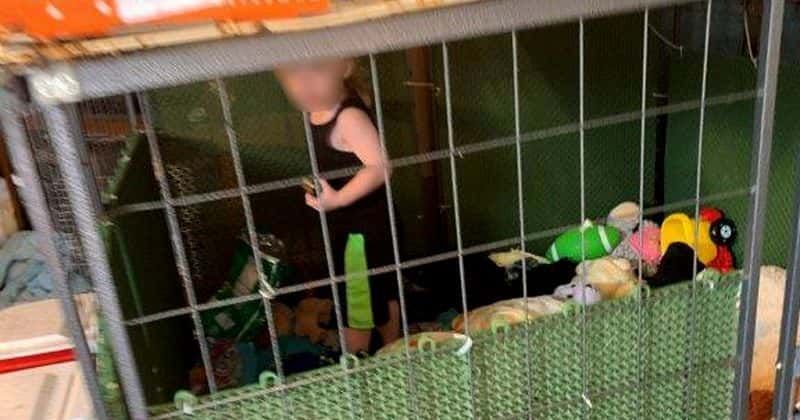 An animal-cruelty mission in Henry County turned out to be even more heartbreaking as deputies discovered a toddler living inside a dog cage in horrific conditions, WTVF reported. Authorities went to the home after receiving an anonymous tip about possible animal cruelty. Little did they expect to find a human child in deplorable living conditions. Henry County Sheriff Monte Belew said that a one and a half-year-old boy was found in a 4x4 cage in the living room. He did not have any toys or blankets.  “Everything that child possessed or played with was in that kennel,” Belew said. "With all of the law enforcement experience up here, it's hard to find something that actually shocks us," he said. "I've never seen this before, and I can guarantee the gentlemen up here with me have never seen this before."

I read that story yesterday. How disgusting. And neighbors complained about them for years! So sorry for all these babies human and animal. 😔

What officials discovered seemed to go from bad to worse. Numerous animals ( more than 600!) were also found in horrendous living conditions. Belew said three buckets filled with hundreds of mice were propped up next to the boy's cage. There was a 10-foot boa constrictor just three feet to the left. They found at least eight snakes in the room. 15-20 dogs were found running loose, along with feces on the floor. The place was described as "unlivable" and there were thousands of cockroaches and maggots.

Many mice and snakes were mere inches away from the boy. #Tennessee https://t.co/p9EIP0yRgH

According to Fox 17, the mother of the child Heather Scarbough, 42, the stepfather, Thomas Jefferson Brown, 46, and Charles Brown, 82, TJ's dad, are all facing felony charges. These include aggravated child abuse and aggravated cruelty to animals, possession of a firearm while committing another felony, manufacturing marijuana, drug paraphernalia, and additional cruelty to animals. More charges are likely to follow. The child's cage had an overwhelming smell of urine that was littered with crawling bugs. It seemed he was living there for some time. Sheriff Belew said when Brown was arrested he was worried about getting his animals back and did not ask about the child. "In a single-wide trailer in the living room you've got a kid caged, you've got 8 snakes and you've got the snakes feed butted up against the child's cage," Sheriff Belew said. " Eight snakes in the same room, then mice running everywhere." Another official confessed that the scene was even more heartwrenching as the child was "living just like the animals." There were also 127 marijuana plants and 17 guns found on the property. Brown is a convicted felon and is facing an additional gun charge, Belew said.

AWFUL: Three people were arrested after police say they found an 18-month-old boy in a dog kennel in a filthy mobile home -- which also had eight snakes, buckets filled with hundreds of mice, feces on the floor and thousands of cockroaches and maggots. https://t.co/K6i30Q9sfO

Sheriff Monte Belew recalled the incident to reporters at a press conference on Friday morning. He and his team knew something was awry as soon as they stepped into the property and had to “weave” their way through debris, grass, and multiple animals to get to the front door. “As I looked through the front door, I can see a child in a dog kennel,” he recalled. “Obviously, (by) the looks of the kennel, you could tell the child stays in there a lot.” The 10-foot snake "could’ve easily suffocated that child if it got a chance,” he said. “I can’t believe people could actually survive and live in these unlivable conditions,” Belew said. The boy appeared to be starving and was soon sent to the state department of children’s services.

According to The Sun, the investigation remains ongoing and each defendant has a $300,000 bond. Although the child was found in terrible circumstances and a dangerous environment it seems there were no immediate signs of physical injuries. The Department of Child Services now has custody of the child. "We are in an ongoing investigation in the northern part of the county involving child abuse, large-scale animal abuse and a marijuana grow operation," Sheriff Monte Belew told The Paris Post-Intelligencer.

Let me tell you about children held in cages in ICE Custody while we’re at it.