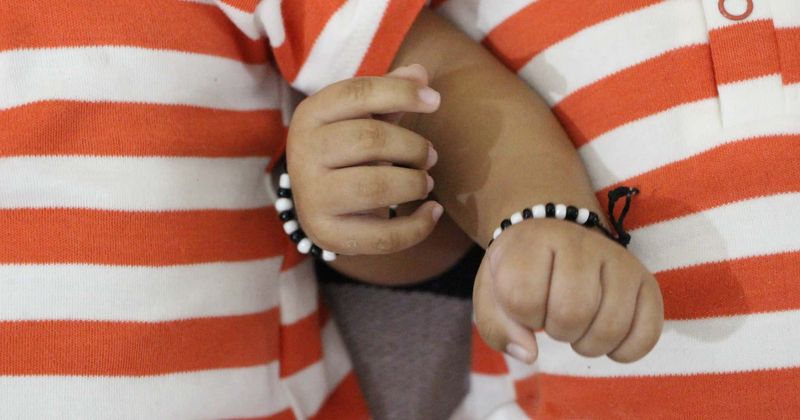 Trigger Warning: The story has graphic details of child abuse and assaults that readers may find disturbing

A 1-year-old boy in Michigan has died and his twin brother is in serious condition after being assaulted and beaten possibly by their mother and her boyfriend. Police were called to an apartment in Ecorse early on Tuesday morning and witnessed horrific scenes with one of the boys named, Zyaire, already dead and his brother, Zion, inflicted with some very serious injuries.  EMT workers tried to revive Zyaire but he was unresponsive to treatment reports PEOPLE. They then rushed the other boy to the Detroit Children's Hospital of Michigan where he underwent emergency surgeries. The twins' mother, Lisa Reed, was taken into custody and the police started a hunt for her live-in boyfriend named James Gibson and found him hours later. He has been convicted of child abuse in another previous case.

While the police did not reveal the injuries from which Zyaire died, Zion had a broken hip, a broken nose, and bleeding of the brain and to repair fractures to one of his femurs. According to Fox2Detroit, Timothy Sassak, an Inspector with the Ecorse police said about the case, "This is the worst I've ever seen," in his 32 years on the force. He reached the apartment at around 4 a.m on the day and tried to revive Zyaire but could not. He noticed that Zion had signs of abuse. Gibson was finally found after 12 hours and arrested for suspicion of being involved in the death of one child and the injuries in another. The boys had been living with their mother and boyfriend for the past three months.

I really wish I hadn’t seen this. This is going to haunt me for a long long time. I can’t begin to wrap my head around how people can do something so evil

Sassak said Gibson had decided to leave Reed and had taken the family vehicle with him and did not return. Gibson was hiding in his uncle's house in Sumpter Township where he was located by The Fugitive Apprehension Task Force. Prior to this case, he had just been on parole for a separate child abuse case in Traverse City in early May. Both Reed and Gibson are expected to be charged in connection to the death of Zyaire and the physical abuse of both the boys. Meanwhile, Zyaire's body has been sent for an autopsy and a report is awaited. The boys' uncle, Ricky Tanner said, "I want him to know what he did to this family. I want him to know the suffering." He had been called by the police early Tuesday morning. He added, "Two very innocent boys, happy loving children. To realize what happened in that home to those boys."

Tanner said further, "It angered me and brought me to a level I never thought I would understand." According to The News Herald, the uncle also took to social media to mourn the death of his nephews and wrote, “Today has been one of the most heartbreaking days of my life” while adding that he lost a "beautiful baby" referring to Zyaire and wrote about Zion stating he still needs prayers for his quick recovery. "He needs lots of prayers," Tanner wrote as he thanked the Ecorse Police Department as well as other departments involved in the case: the Wayne County Sheriff’s Department and River Rouge Police Department. Numerous cases of child abuse and death due to their guardians have been recently reported from across the country. We reported in May about a 2-year-year old boy in Pennsylvania who died after being beaten and sexually abused by his mother and her boyfriend.

Following a very disturbing case of child abuse in South Milwaukee. A four-year-old girl died from her injuries. Her mother, Christina Collado and her mother’s boyfriend, Jerome A Millen are both charged in connection to her death. pic.twitter.com/6DIpzHliIm

The boy had severe injuries such as a fractured skull, a brain bleed and was covered in bruises and injuries. He had also been sexually abused several times. In another case,  a man in Milwaukee who burned, bit, and beat his girlfriend's 4-year-old girl while she did nothing to stop the horrific abuse.