This 10-year-old girl from Riverside comes up with an ingenious idea of using a shower curtain, Ziploc bags, disposable plates, and a hot glue gun to hug her grandparents safely. 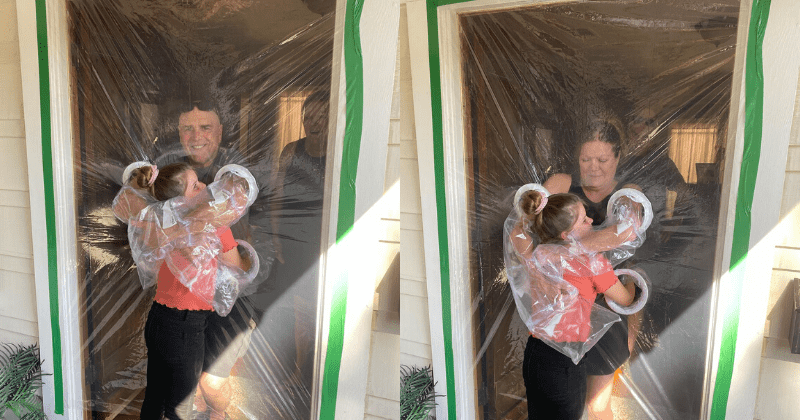 The coronavirus pandemic has changed the status quo around the world, making social distancing the new normal. Simple pleasures people took for granted like hugging or holding hands with their loved ones, or sharing a meal at a local diner, have been put on hold in a bid to stop person-to-person transmission. While this situation is taxing for the whole world, it's the grandparents who are feeling the brunt of it as they are most susceptible to the deadly virus. This is why they are forced into isolation and their ability to enjoy the company of their grandchildren has been taken away from them. However, this 10-year-old girl from Riverside, California found a genius workaround for this issue and brightened her grandparents' days.

According to ABC7, Paige Okray missed being hugged by her grandparents, so she planned to change the situation. With her mom as a sidekick and a few video tutorials of people using blankets to hug family members, she came up with an idea. Using a shower curtain, Ziploc bags, disposable plates, and a hot glue gun, the duo made the girl's vision a reality. Her mom, Lindsay Okray said: "She came up with the idea, she laid it out in the family room and spent multiple hours working on it." A nurse for the COVID-19 unit at Riverside Community Hospital, Okray, was excited to be part of this plan since she has had to maintain physical distance from her family as a precaution. Posting the video on Facebook, the mom wrote: "Paige saw a video of someone who made this type of "blanket" to hug their family. She put together a list and she designed it so she could hug nana and papa.. this girl is so freaking amazing and we were so happy to be able to hug them!!"

This post was accompanied by a series of heartwarming pictures and a video of the girl embracing her grandparents. The contraption the mom and daughter designed involved the main doorway of the grandparents' house covered in cellophane sheet with four holes: two for the girl to put her hands through and two more a little higher up for the grandparents to reach through. "You get to hug me,"  the thrilled girl can be heard saying as her grandmother opens the door. Her grandmother obviously delighted stated: "Oh my God!" several times before proceeding to hug her. The girl could also be heard triumphantly saying "We made it!" a few seconds into the video.

This isn't the first time that people have found a way to reach out to their loved ones. Similarly,  southern California grandparents, Daria and Bobby Lucarelli, too, came up with their own solution to hug their four young grandsons, Wiley, Val, Kelly, and Kace reports ABC7. The duo designed a pantsuit with clear trashbags and used a snorkel for breathing and went ahead to surprise their grandchildren who lived just a few minutes away from their Ventura home. Talking to Eyewitness News, grandma Daria said that she got the idea after reading about nurses who'd resorted to using trash bags as improvised personal protective gear. "So, I went and picked up clear trash bags and cut them up and made pants and made a top," she said. "I thought, well, I can't put a hole in this or they will not let me breathe anything around them, so I put the snorkel in and kept it up in the air." While it did get a bit too hot inside the trash suit, the slight discomfort was all more than worth it in the end.