trending celebrity people lifestyle news animals
100 Years Ago On This Day, A White Mob Unleashed The Deadliest Election Day Attack in US History

100 Years Ago On This Day, A White Mob Unleashed The Deadliest Election Day Attack in US History

White mobs set fire to the entire Black neighborhood in the Florida town after the lynching of a well-known Black man, July Perry, in what came to be called 'The Ocoee Massacre ' 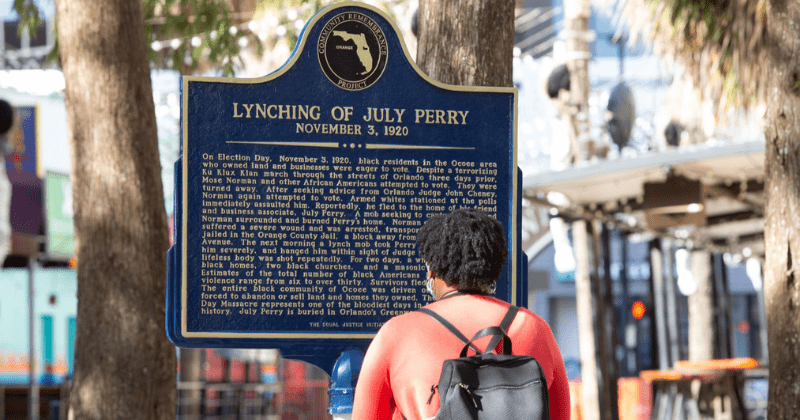 Trigger Warning: This report has details of race-motivated violence and death that readers may find disturbing

November 2 marks a dark day in US history with the largest recorded episode of Election Day violence. In 1920, the African American residents of Ocoee, Florida, went out to cast their vote in the presidential election and were instead met by White lynch mobs. This was the Ocoee Massacre which has often been overlooked in American history. This year marks 100 years since the horrific incident took place, and as much as society has progressed since then, it has also remained the same in more than one way. Black voter suppression has not come to an end even today.

According to The Undefeated, Mose Norman, a well-off Black man attempted to exercise his right to vote in the presidential elections but was beaten up by members of the Klu Klux Klan. Later that day, they went looking for him and found him in July Perry's house. He was another well-known Black man. Perry was shot dead and was dragged behind a car and hung from an oak tree in Orlando. But this was only the beginning of the horrors that were yet to unfold. More White mobs set the entire Black neighborhood on fire, burning down 25 homes, two churches, and a fraternal lodge.

The Ocoee Massacre occurs at the black community of Ocoee, Florida, when a white mob murders six African Americans after two white men were shot to death while trying to arrest Jules Perry, a black man who attempted to vote today but was denied because he didn’t pay the poll tax. pic.twitter.com/G6IaAIG7KD

"State and local officials -- along with the Ku Klux Klan -- understood that white supremacy was in trouble," Paul Ortiz, a history professor at the University of Florida, in an essay for Facing South 10 years ago. "They responded mercilessly. African Americans who tried to go to the polls were attacked, driven out of the state, and assassinated." Klansmen even surrounded courthouses to prevent Black people from voting. The act of voting was a revolutionary act in those days when Black people were emancipated but it would be several more decades till the discriminatory voting practices would be addressed and outlawed.

100 years ago today, a white mob in Florida killed up to 60 Black people after Black men tried to vote.

The #OcoeeMassacre was the worst election violence in U.S. history. There was never justice, and a mob leader later became mayor.pic.twitter.com/asFyexHEf8

To date, the number of people who fell victim to these racist attacks has not been confirmed. Some reports suggest up to 60 people lost their lives but other Black people in the town were forced to flee. Sha’ron McWhite, the great-niece of Perry told Click Orlando, "This happened over 100 years ago. I am so emotional for all the families." She added, "To know that a loved one was lynched, for no reason -- senseless -- that is not something that you talk about day to day." Even today, voting is considered a key to bring about changes and is no less a revolutionary act. Jacqueline Perry Blaylock, the great grand-niece of Perry stated, "If you want to honor your ancestors, vote."

WFTV 9 reports that Governor Ron DeSantis has signed a proclamation declaring November 2, 2020, as 1920 Ocoee Election Day Massacre Remembrance Day in Florida. The proclamation reads, "On the 100th anniversary of this bloody day in our state’s history, Floridians should honor the memory of the victims of the 1920 Ocoee Election Day Massacre, and remain vigilant against hatred, persecution, and tyranny of any kind." Local and state leaders gathered to mourn the victims of the massacre and honor their descendants. Narisse Spicer, whose great-grandparents lived through the massacre said, "Some fought for their right to vote and lost their homes and livelihood."

Rachel Allen, director of the Peace and Justice Institute at Valencia College told the Orlando Sentinel, "Whites called it a riot because their perception was Blacks were violent, dangerous, needing to be controlled and they started a riot, of course, none of which the historical records show was true. The Black perception is it was a massacre, a violent attack on a prospering neighborhood. Whites from Orlando and Winter Garden, many with Klan ties, came with an intent to disrupt and intimidate and frankly terrorize Black leaders who had gained power and standing, and they did just that." Over the years, the tragedy is being seen for what it was, a racial attack. Allen says that this is a good start for reparative action.