In a photo making the rounds on the internet, Beatrice Lumpkin can be seen smiling through the protective suit as she holds the ballot in her gloved hand and stands by the mailbox just outside her apartment building. 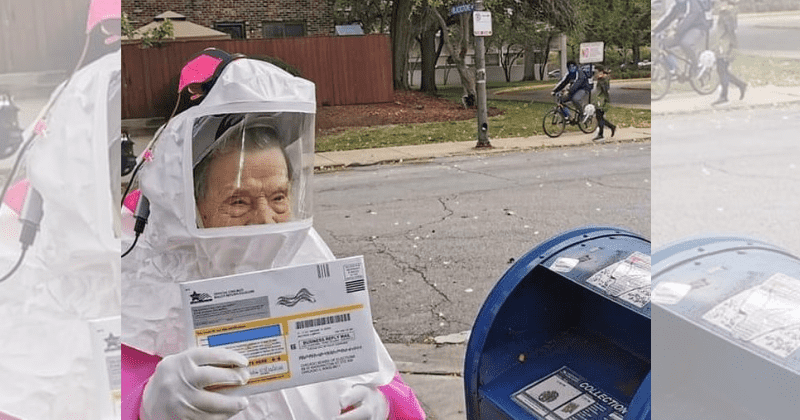 As the pandemic is yet to be brought under control, people, especially the elderly, are required to stay indoors to eliminate the risk of contracting the virus, and only step out when it is absolutely necessary. This 102-year-old grandma stepped out anyway, with her ballot just this week, because, according to her, voting is essential. "It's the most important election of my lifetime," she said, speaking to CBS Radio Station WBBM. "The very future of democracy is on the line." Beatrice Lumpkin stepped out of her Chicago residence wearing what looked like a hazmat suit and took her ballot to the mailbox, making sure she was safely casting her vote this year. A photo of her in a PPE was soon shared by the Chicago Teachers Union, of which she was a member in her years as a teacher, on their Instagram account. In it, Lumpkin can be seen smiling through the suit as she holds the ballot in her gloved hand and stands by the mailbox just outside her apartment building.

102-year-old Beatrice Lumpkin put on a face shield and gloves and took her ballot to the mailbox.

When she was born, women couldn't vote. pic.twitter.com/jhiXyDL682

The former teacher's first memory of voting was from 80 years ago when she cast her ballot for presidential candidate Franklin D. Roosevelt in 1940. Since then, she has never missed a single vote. When asked what the reason was behind her first-ever vote, she said it was to honor women's rights. "When I was born, women couldn't vote," she told WBBM on Thursday. The centenarian is very well aware of the mail-in ballot process as well and even recounted the process to the outlet. "As soon as they get my ballot I'm going to get an email that'll let me know they have the ballot," she added, stating her confidence in the security of the process, and that it allows her to track the ballot electronically.

Lumpkin seemed to have some choice words to President Trump too, who has tried time and again to undermine the credibility of mail-in voting. However, she chose to not say it and instead said: "Well, if I had the chance, there would be a whole lot I could say to President Trump." Lumpkin believes her little move would also help others to step in and vote and says if she can do so in spite of the age factor, so can others. Speaking to Good Morning America, she said: "That’s why I had my grandson take a photo of me, because if I could come out at the age of 102 and face a pandemic [to vote], nobody should have an excuse. I think that in this election more than any other that I’ve taken part in, the only way we can answer it is for the people to come out and vote and stay active to a degree we've never seen before." She is optimistic about a strong voter turnout this year. "I think we can do it," she said.

If 102-year-old Beatrice Lumpkin can get herself out there to cast her vote, we have NO EXCUSE.

Lumpkin is a retired teacher, having worked for several decades in the Chicago public school system. When the picture was taken she was accompanied by several of the union members and a few of her family members which seemed to show that even a global health crisis was not enough to break her streak. "There’s a lot at stake," she said about the 2020 election which is set to occur in less than a month. The November showdown will see the incumbent President Donald Trump face-off against former Vice-President Joe Biden in what could be one of the most elections in American history. "If you never bothered to vote before and if you care anything about the children coming after us, you’ll come out and vote this time."

Lumpkin has lived a long and fulfilling life and is a mother of four, grandmother of three, and great grandmother of one. She is looking forward to a new generation of voters to take the country and its democracy forward. "I have a lot of confidence in the young people," she said.