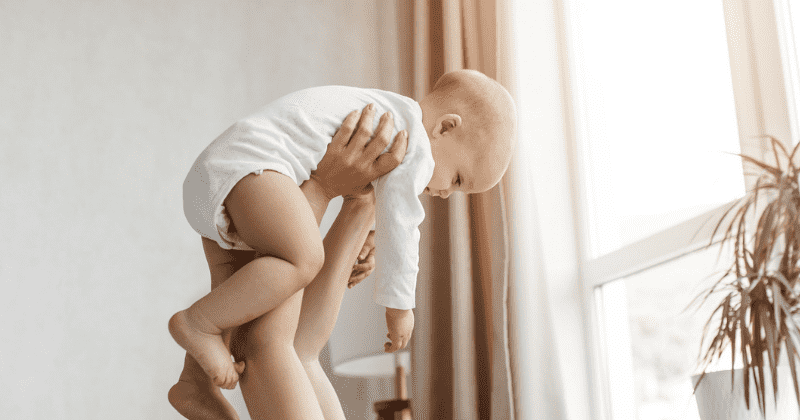 After several heartbreaks, one lucky couple in Arizona was finally blessed with their third child. Parents, Cary and Tim Patonai were expecting a large baby, however, they were pleasantly surprised when their son Finnley came two weeks early. Weighing 14 pounds and 1 ounce, Finnley was nearly double the size of an average newborn. "Finnley was a little celebrity at the hospital. Everyone wanted a selfie with him," said 36-year-old Cary about her son who was 23.75 inches tall. "The OB/GYN who performed the C-section said that in 27 years he had never seen a newborn that size. There was so much excitement in the delivery," she added.

The birth of their little soul was a very emotional affair for the Arizona-based parents, especially Cary who has experienced 19 heartwrenching miscarriages, including two after the birth of her second son and before Finnley. "Two of the miscarriages were sets of twins," shared Cary, according to TODAY. "It was traumatic for the whole family — especially our oldest child. Each loss would break his little heart." The Patonais are proud parents to Devlon, 10, and Everett, 2, who weighed 8 pounds, 2 ounces, and 11 pounds, 11 ounces respectively when they were born. This makes Finnley the largest baby of them all.

Per the American Pregnancy Association, most full-term babies (i.e. 39-40 weeks gestation) weigh between 6 and 9 pounds. Doctors believe that Finnley would have weighed around 16.5 pounds if he was born two weeks later on the estimated due date. "I’m used to carrying big babies, but this was on another level," admitted the mom of three. "It got to the point where I could hardly move. It would take me 30 minutes to recover from taking a shower." To put his size into perspective, the parents revealed that Finnley was wearing size 2 diapers and clothing created for babies aged six to nine months when he was just two weeks old.

But his unusual size doesn't change the unconditional love of his mother who describes him as "snuggly and healthy." Cary also noted that little Finnley is a "great sleeper" who has a hearty appetite. "Typically, newborns are taking in about one to two ounces of milk," she revealed. "Finnley is eating around four-and-a-half ounces." The family cannot get enough of their sweet bundle of joy and spend every waking moment cuddling and loving him. "Our family is finally complete," expressed Cary. "He’s absolutely perfect."

Now, Finnley is not the heaviest baby in the world, according to the Guinness World Record, which says that the heaviest child to survive infancy belongs to a boy who was born in Aversa, Italy, in 1955. The child reportedly weighed 22 pounds, 8 ounces. Back in 2019, a baby weighing close to Finnley was born in the U.S. Thirty-one-year-old Joy Buckley gave birth to her daughter, Harper, who weighed 15 pounds, 5 ounces at the time of birth. "I knew she was gonna be big, but I didn't anticipate no 15-pound baby," said the mother while talking to NBC affiliate WETM.

At the time, Harper was the largest baby to have been born at the Arnot Ogden Medical Center in Elmira, New York, in its 30-year history. She was 23 1/4 inches long and had to be kept at the hospital's neonatal intensive care unit so doctors could monitor her oxygen and sugar levels. "I felt like I had been hit by two tractor-trailers simultaneously," said Buckley describing her condition post-birth. But she's thankful to have been blessed with a healthy baby girl. "The thing I've always wanted to do in my life was to be a mom," she said according to TODAY.