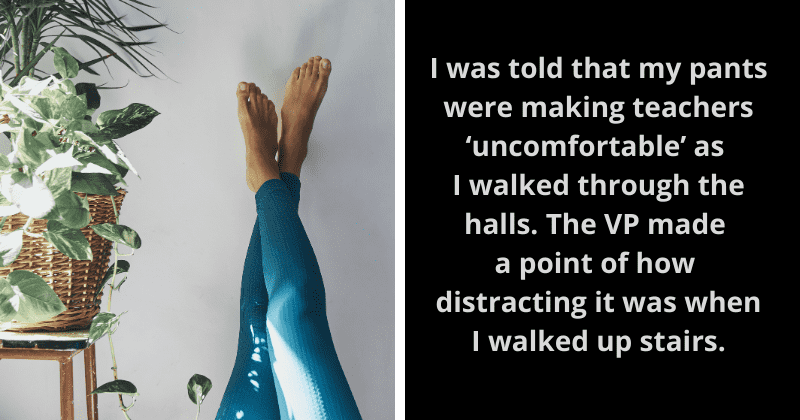 When Kate Wilson was 16 years old, she didn't expect throwing on some comfy clothes would create a stir at Honesdale High School in Pennsylvania. According to Percolately, the teen wore a baggy long-sleeve shirt and some leggings and this got her into trouble. Wilson was reprimanded by school administrators who told her to change her outfit because her leggings were reportedly making teachers feel "uncomfortable."

She described the harrowing tale of her “dress code violation” on  Facebook, explaining: I was told that my pants were making teachers ‘uncomfortable’ as I walked through the halls. The VP made a point of how distracting it was when I walked upstairs. This makes me sick. I’ll admit, I was dumbfounded. How could a grown man so confidently say that I was the problem in that situation? She even questioned how it was possible that a teen could make a grown human being uncomfortable by merely existing. If that is the kind of teaching staff you have here in this school district, it is unacceptable. She vowed that no other girls would have to change simply "to assure that grown men (who are constantly surrounded by young girls) won’t be turned on by her walking up the stairs."  She noted that: This is a common fault in our society, and it is disgusting. By telling the victim of a potential assault that she is the problem, you are perpetuating the notion that the female body is a thing for men to use, and therefore, you are perpetuating rape culture. Today, I was told that the discomfort of a middle-aged man who seemingly can’t keep his eyes off of a sixteen year old’s rear end takes precedence over my education. I was called disrespectful for defending myself. The only disrespect that occurred in that office was the blatant disrespect of my rights over my body, my education, and my rights as a human being. She added asking others if her outfit made them "uncomfortable" or "distracting."

Wilson continued sharing her insightful take on the disturbing incident when people pointed out that her anger was “out of context” and she should play by the rules in school if she doesn’t want to be pulled up. She responded: My issue is with the way it was handled and the language that was used, and the fact that my school is seemingly protecting middle-aged men who can’t keep their eyes off my legs rather than myself. I’ve gone to the same school district my whole life. When I was younger, we were allowed to wear leggings with shirts that covered our rear ends. I assumed the rule carried into high school, and so I inquired why I was in trouble when I was told to change. That’s when I was met with the "teachers are uncomfortable" narrative. If I had been told "The rule is different, we’re trying to maintain professionalism", I would have been less likely to protest. But instead, I was told to protect myself from the wandering eyes of people who are constantly surrounded by young girls. That’s where my issue lies. I’m not throwing a hissy fit about not getting to wear leggings to school (even though I do believe that rule is ridiculous). I am standing for all the other girls who have been in my position or could be in my position in the future. I am protecting the right to be female and learn. I am protesting the institutionalized sexism that was on display and runs rampant throughout society. I am doing this for larger reasons that’s just "I want to wear leggings."

Many others came out in support of Wilson's stand. Gladys Miu rightly noted: Well said! I applaud you for your wisdom to know what’s right/wrong, your courage to stand up against what’s wrong, and your eloquence in expressing yourself! Cathy Lynn shared: As a teacher I wouldn’t even notice your outfit. There are so many other things to worry about during the school day!! Gwendolyn Wilson praised Wilson's handling of the situation, writing: Wow, I’m amazed at this student’s maturity. So wonderful for her to recognize the unjustified treatment and standards of the leadership in her HS. Her statement that if it had been presented that she wasn’t meeting a professional standard of dress code that would be one thing. But the fact it was to prevent men, (men who are the leaders and protection of our children ) from having uncomfortable feelings, then that’s a problem. Way to go. And way to go to her parents or those who helped her feel empowered enough to stand up for herself!!

I’m sorry but if MALE teachers are pointing out that a very normal outfit on a 16 year old girl is TOO DISTRACTING, maybe HE needs to re evaluate some shit in his own life and leave her the fuck alone. https://t.co/6juxFWJgtB