16-Year-Old Goes Viral For Her Huge 5-Inch Middle Finger: 'The Reaction Has Been Insane'

The aspiring model's video has been watched by millions of people. 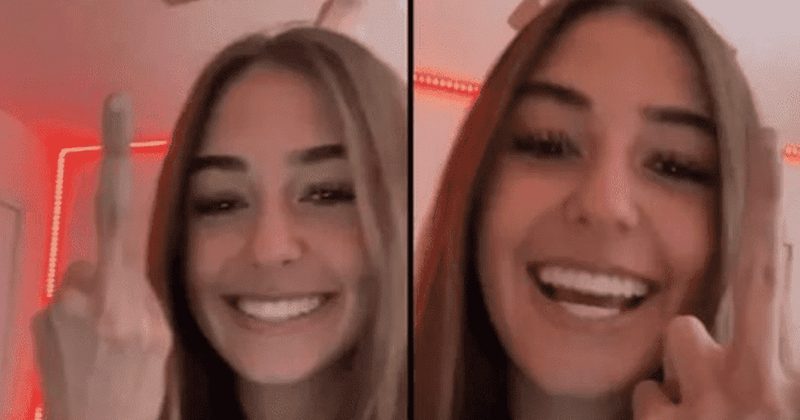 Flipping the bird has never been such an internet sensation before. Little did one Arizona teen know how her middle finger would go viral. Olivia Mercea, 16, shared a pretty simple video holding her long middle digit up against her face. She captioned it: My finger. That's it. Soon enough, the TikTok video ended up with more than 4 million views and counting. After the teen's video amassed so many views, she followed it up with another video with the text: "Me thinking about the time my five-inch finger went viral." By the end of the short clip, she blows a kiss, where she jokes, "My toes are worse."

Talking about her unusually long digits to LADbible, Mercea mentioned,  "I would say I realized it was longer than usual a couple of years ago. At first, it was an insecurity, but then I realized it was actually pretty funny and something that would always bring out laughs." Mercea's first video showing off her middle finger got more attention than she ever imagined. The aspiring model said, "The reaction to my TikTok has been insane. I never thought that it would reach the level that it has. It is so awesome and crazy to think that I am even talking to you about having an article on my finger. I am really trying to get into modeling and hopefully, my TikTok has reached people in the industry too."

Mercea, who goes by the TikTok handle @olliviahaha, has a sense of humor when it comes to her one-of-a-kind features. Apart from her long fingers, are her toes just as big as she mentioned? She answered, "Yes, my toes are also very long! Whenever I drop products in the shower, I will pick them up with my toes instead of reaching over." So what causes one's digits to be longer than the norm? According to Medical News Today, hand sizes vary according to a number of factors, including biological sex and age. Apparently, males tend to have larger hands than females. The average length of a female hand is supposedly 17.2cm so this means that our TikToker's giant finger (which is 12 cm) is basically the length of a hand on its own!

The finger blasting champion of the worldhttps://t.co/7FR8Pmyb9x

Curious to know who had the largest hands in the world? We turned to Guinness World Records, which stated that the "largest hands ever" belonged to Robert Wadlow from the USA. Wadlow was the tallest man ever with hands that measured 32.3 cm (12.75 in) from the wrist to the tip of his middle finger. He wore a size 25 ring. Wow! According to GWR, the gentle giant as he's often referred to was born way back on 22 February 1918 to two regular-sized parents. As a baby, he weighed an unremarkable 8.7 pounds. But soon enough he began growing at an unbelievable pace. He hit 1.63 m (5 ft 4 in) by the age of five, and by age eight he was over 5 ft 11in, taller than his dead! As he grew, the tall man exuded a calmness not many would expect and quickly found fame because of his stature.

When asked if he was annoyed when people stared at him, he calmly joked, “No, I just overlook them.” Unfortunately, Wadlow's life was short-lived. His legs reportedly caused his premature death at just 22 years old. According to the GWR, "He died at 1:30 a.m. on 15 July 1940 in a hotel in Manistee, Michigan, as a result of a septic blister on his right ankle caused by a brace, which had been poorly fitted only a week earlier. His last words were 'The doctor says I won't get home for the....celebrations,' a reference to his paternal grandparents' golden wedding."