26-Year-Old Texas Girl Nearly Lost Her Sight After Getting Eyeballs Tattooed. She Has "No Regrets"

Sarah Sabbath, who has tattoos all over her body and face, said the artist messed up the procedure. 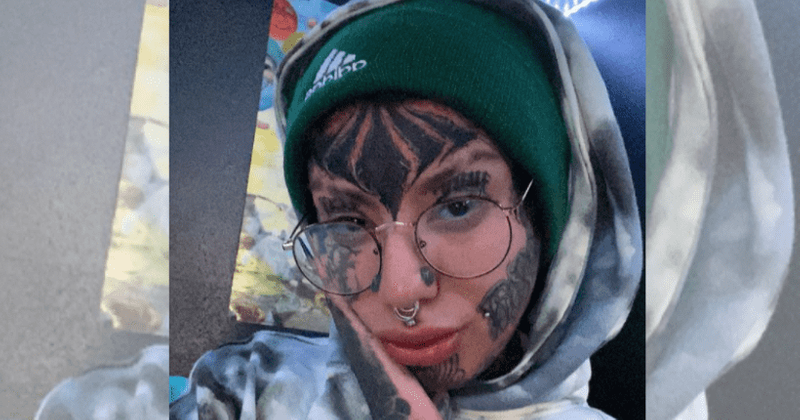 A woman in Texas nearly lost her sight after she got her eyeballs tattooed. But she said she is okay with it since she loved the way she looks. Sarah Sabbath, 26, from El Paso, Texas, was bullied as a child and she felt tattoos gave her confidence and a kind of inner strength to face the world. No wonder her body is covered with the same. She has spent some $3000 to $4000 on getting herself inked all over. Speaking with Truly about the botched-up eye tattoos, Daily Mail reported she said the artist "didn't put enough saline solution into the ink mixture" which resulted in the loss of her eyesight, at least for a while. Following the procedure, she said she was not able to "do anything" which also left her a bit scared and "very depressed" for a while.

"I could not watch TV, I didn't like being around bright lights and I didn't like being outside. I got very, very depressed from it. I had a very difficult time doing anything," said Sabbath. When it got very bad, she decided to take the help of a doctor. An eye specialist she consulted gave her some drops which she said improved her vision, but she's yet to be fully okay. Her eyesight "still bothers her" and as of now, there is no knowing when things will be back to 100 percent for her. But astonishingly, she said she had "no regrets" because the ink has given her the confidence to "express herself."

According to Sabbath, her school years were a nightmare with kids bullying her for being "hairy." It was then she had this desire to be covered in tattoos. Years later, after she got her wish, she said has become a "stronger person." Sabbath told the online publication, "I think I've spent around $3,000 to $4,000 on my tattoos. They help me to express myself, they help me to feel me. I don't regret getting any of the tattoos because I feel more myself now than I did then." But she said not many people understand her need. She feels the stares and disgust of strangers who constantly judge her. Many label her with the stereotypes associated with people who have tattoos -  such as a "criminal" or someone who is uncultured and uneducated. But Sabbath is not bothered and wants to get more.

"Everyone's different so I'm not going to judge them for thinking the way that they do. Not everyone has the balls to express themselves the way I do," she said. Sabbath has an Instagram account where she boasts of over 27,000 followers and regularly posts pictures of herself showing off her ink. She's received both positive reactions as well as loathing from people on the page. "They are my shield. It's a way of life and a part of me. I'll never stop getting tattoos," she said. About her face tattoos, she recalled starting with a small heart tattoo on the side of her eye that soon spanned to many designs on her cheeks, chin, forehead and eyelids. While eye tattoos are becoming increasingly popular, they pose a real danger to a person's eyesight.

A case in example is this story we wrote about a 25-year-old girl, Aleksandra Sadowska, from Wroclaw in Poland. She lost her eyesight permanently after getting a permanent tattoo. She first lost vision in her right eye and the doctor said she could also end up losing vision in her left eye too. An investigation was carried out and it was revealed that the tattoo procedure was severely bungled by the tattoo artist.