trending celebrity people lifestyle news animals
3 Inmates Rushed To Save Life Of Guard Who Suffered Heart Attack: "I Don’t Want Anyone To Die"

3 Inmates Rushed To Save Life Of Guard Who Suffered Heart Attack: "I Don’t Want Anyone To Die"

The three inmates raised an alarm after the guard fell down unconscious and then called for help using the phone and radio. 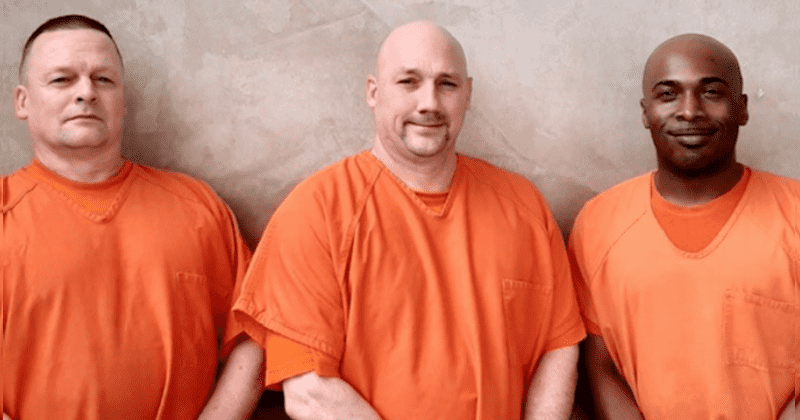 Three Georgia inmates have been praised for saving the life of a prison guard who suffered a heart attack at his desk in Gwinnett County Jail. As the three inmates realized Deputy Warren Hobbs was having a heart attack, they started banging on their doors to raise alarm and alerted the rest of the inmates, who joined them. The deputy had lost consciousness after suffering the cardiac arrest and was bleeding from the fall but briefly woke up from all the noise and managed to unlock the cell doors via the control panel on his desk, reported The Daily Mail. Mitchell Smalls, Terry Loveless, and Walter Whitehead rushed to Deputy Warren Hobbs' aid. They used the phone and Hobbs' radio to eventually save the prison guard's life.

Kudos to these inmates for coming to the aid of our deputy when he suffered a cardiac emergency in a jail housing unit. We thank them for their timely assistance and the lesson their actions provide. It's not the uniform that makes a hero. It's the person wearing it. pic.twitter.com/tVDJX2FcQP

"It scared me. I don’t care if it’s a police officer or whoever it was. I will do whatever I can to save a man. I don’t want anyone to die," said Whitehead, one of the three inmates at Gwinnett County Jail, Georgia. As per records, Terry Loveless, and Walter Whitehead were jailed on drug charges while Mitchell Smalls had charges of battery to his name. The security footage showed Smalls noticing that Hobbs was not well. He starts banging his cell door and alerts the other inmates. The other inmates join in, to bang their cell doors, to make as much noise as they can. The noise awakens Hobbs who opens the doors of the three inmates.

"He grabbed a hold of his desk and he was pulling himself up. It was sad because it didn’t look good at all but the man had fight in him to get up. As he came up, I can make eye contact with him and I’m like deputy Hobbs, Deputy Hobbs, please," said Smalls. As soon as the door of their cell opened, the three of them rushed to Hobbs' side. They used the phone and Hobbs' radio to alert the jail authorities about his condition. "I started hollering and screaming and banging on the door to try to alert everybody to wake up," said Smalls, reported Fox5. Hobbs is now safe and recovering at his home. Hobbs said all he could remember was a sound like drums and people shouting his name. He had suffered a crack in his head from the fall on to the floor.

The Sheriff's office lauded the inmates for their timely intervention. "The inmates whose rooms were close enough to see what was happening began pounding on their doors. Soon the entire unit was thundering with noise as many inmates pounded on the doors shouting for our deputy who lay unconscious and heavily bleeding on the floor. Our deputy later stated that while he did not realize he'd been unconscious, he became aware of what sounded like pounding drums and could hear inmates shouting his name over and over. He immediately thought an inmate needed help and somehow managed to rise to his feet and press the control panel to open cell doors," read the statement. "Many people have strong opinions about law enforcement officers and criminals but this incident clearly illustrates the potential goodness found in both."

Gwinnett Sheriffs Office tweeted a picture of the three men and credited them for saving the prison guard's life. He wrote: Kudos to these inmates for coming to the aid of our deputy when he suffered a cardiac emergency in a jail housing unit. It's not the uniform that makes a hero. It's the person wearing it. "These inmates came to his aid because our deputy, like most law enforcement officers, treats people with the dignity they deserve," said the Gwinnett County Sheriff's Office, according to CNN. "These inmates had no obligation whatsoever to render aid to a bleeding, vulnerable deputy, but they didn't hesitate. Many people have strong opinions about law enforcement officers and criminals, but this incident clearly illustrates the potential goodness found in both."