6 Lessons You Need To Learn Before You Die

Listen up and take notes. 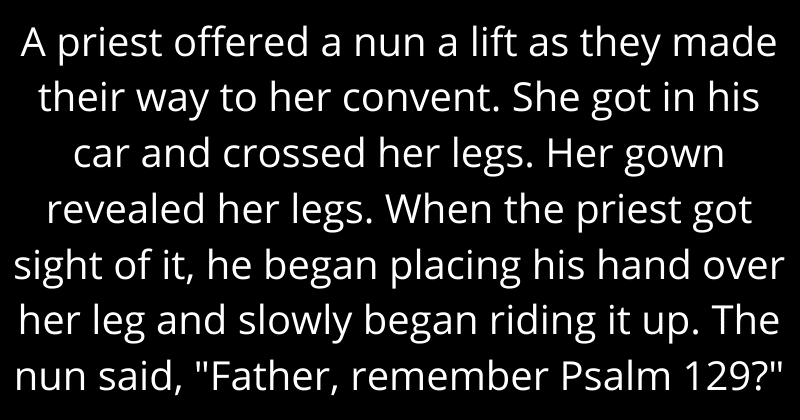 Every decision we make leads us onto a particular path in life. And even a split-second decision can set us off in a completely different direction in life. Freebies have listed six amusing stories each hoping to enlighten us on how our choices make up for who we are. The results of our actions have consequences. And many times we can learn from them.

LESSON 1
The first story involves a woman who just got out of a shower as her husband walked in for one. When the doorbell rings, she quickly wraps herself up and goes to open the door. It's Bob the next-door neighbor. Seeing her, he immediately says 'I’ll give you $800 to drop that towel.' She takes a moment to think and then drops her towel, and stands naked in front of Bob. A few seconds later, Bob hands her $800 and leaves. She wraps herself back up in the towel and goes back upstairs. Her husband asks, "Who was that?" She replies, "It was Bob the next-door neighbor," He adds, "Great, did he say anything about the $800 he owes me?"

MORAL OF THE STORY
"If you share critical information pertaining to credit and risk with your shareholders in time, you may be in a position to prevent avoidable exposure."

LESSON 2
A priest offered a nun a lift as they made their way to her convent. She got in his car and crossed her legs thereby exposing them. When the priest got sight of it, he placed his hand over her leg and slowly began riding it up. The nun said, "Father, remember Psalm 129?" The priest apologized, "Sorry sister but the flesh is weak." When they got to the convent, she sighed and went on her way. When he reached his church, he quickly looked up up Psalm 129. It said: Go forth and seek, further up, you will find glory.

MORAL OF THE STORY
If you are not well-acquainted with your own job, you are likely to miss out on a  great opportunity.

LESSON 3
A sales rep, an administration clerk, and the manager stumble on an antique lamp as they head out to get lunch. They rub it and a genie comes out. The genie says, "I’ll give each of you just one wish." The admin clerk goes first, "I want to be in the Bahamas, driving a speedboat, without a care in the world." Puff! She’s gone. The sales rep says, "I want to be in Hawaii, relaxing on the beach with my personal masseuse, an endless supply of Pina Coladas and the love of my life." He disappears. When it's the manager's turn, he quietly says, "I want those two back in the office after lunch."

MORAL OF THE STORY
Sometimes it's best to let your boss take the lead.

LESSON 4
An eagle was resting on a tree branch.  A small rabbit asked the eagle, "Can I also sit like you and do nothing?" The eagle answered, "Sure, why not." The rabbit rested on the ground below. But, alas, a fox just jumped in out of nowhere and ate the poor guy.

MORAL OF THE STORY
You got to be high up if you want to sit idly and do nothing.

LESSON 5
A turkey was talking to a bull. He said, "I would love to be on top of that tree but I don't have the energy." The bull suggested that he eat some of the bull's poo to get nutrients that would help him feel energized. The turkey pecked at a lump of dung and found it actually gave him enough strength to reach the lowest branch of the tree. The next day, he ate some more and got onto the next branch. The turkey was proudly perched at the top of the tree after the fourth night. Unfortunately, that didn't last long.  He was spotted by a farmer, who shot him out of the tree.

MORAL OF THE STORY
You might be able to bullshit your way to the top, but you won't be there for long.

LESSON 6
While a little bird was flying during winter, he froze from the cold and dropped to the ground into a large field. While he was lying there, a cow came by and pooped on him. (Yes, another poo-story). As the frozen bird lay inside, he realized he was beginning to warm. He actually thawed his way out thanks to the poo. He was so happy that he began to sing. A passing cat heard the bird sing and came to investigate. Thanks to the sound, the cat was able to dig out the bird under the pile of cow dung and he ate him!