8-Year-Old With Down Syndrome Hugs His Dad, Says "I'm Proud Of You, Dad" In Emotional Video

Ryan's Mom posted images and videos of the 8-year-old doing jumping jack and skiing along with his Dad. 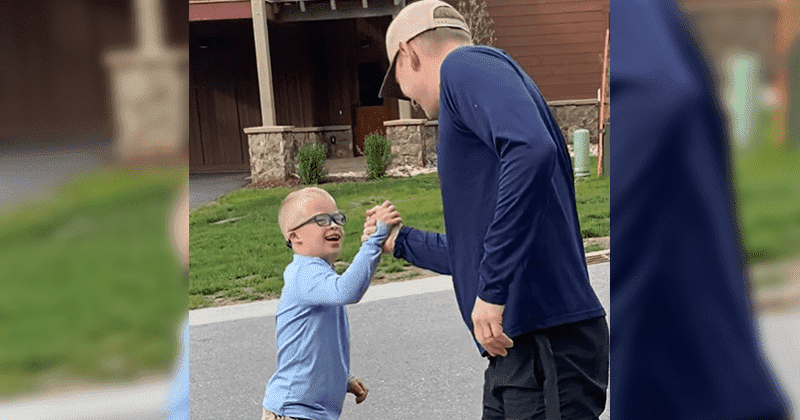 As his father kneeled down to hug 8-year-old Ryan, a kid with Down syndrome, the little boy places his arms on his father's shoulders and told him, "I'm proud of you, Dad." Ryan's parents were overcome with emotion at hearing him connect with his Dad on a level that most of us can only hope to share with our own parents. The family has come a long way considering Ryan had a host of health issues growing up, including low white blood count to issues with the size of his kidney. Maura, Ryan's mother, shared a wholesome post with videos of Ryan spending time with his Dad, skipping, and skiing with him outdoors.

The video shows Ryan instructing his Dad the right way to skip and the pair walking down a street. In an emotional video, Ryan tells his father, "I'm proud of you Dad," and his father gives him a hug. His Dad gets down on his haunches and they hug tightly. When Ryan's mother, who's filming the moment, asks the kid if he's going to cry because he's proud of himself, Ryan says, "No, I'm so proud of Dad." The eight-year-old's voice can be heard cracking with emotion as he says those words. His mother plants a kiss on his head and says, "Awwww." As his Dad gives him a tighter hug, Ryan repeats the words again, this time while placing his hands on his Dad's shoulder. It's clear Ryan is trying to emphasize and tell his Dad how proud he is of him.

Watching her son play with his Dad and connect with him, Maura couldn't help but look back at the long journey that led to this precious moment. The moment was a testament to the fight and will of both the kid's parents and Ryan himself, and the deep love they share. "This doesn't look like much. We dropped the ball on mastering some bilateral coordination skills years ago because the plateaus were endless while triaging acute illnesses. Back to the drawing board, what we were doing was not working. So Ryan’s documents focused on coordination between body and brain and vision for motor planning the past few weeks," wrote Maura.

She revealed how the new methods started showing results. "Two weeks later he got the hang of a bunch of skills and mastered out of all his vision exercises. These bilateral skills using the left and right sides of the brain will help with writing, all sports and ball skills, tying shoes, confidence, social skills, language, etc. Even late, it’s still progress. Sometimes the little victories are the biggest," wrote Maura.

In another post earlier this year, Maura also spoke of the difficulties Ryan went through over the years. "[Ryan's] trajectory went from stressful to exciting. 5+ Years on an adult thyroid dose, 2 strabismus eye surgeries, 1 kidney was 2 standard deviations smaller than the other, the urologist was talking about surgery, backflow. We could not wrap our heads around it all. Ryan’s white blood count was 2.2 w one acute illness after the other. Every single vitamin was scary deficient. [He] was not absorbing vitamins in his food. Previously, he had no endurance or strength to even shuffle skis on flat, let alone carry them. Abs were 5cm apart. His shut down/flop and drop was annihilating. Early intervention and preschool were amazing, but being little and cute = avoidance behavior taking over," wrote Maura.

She wrote about taking different approaches to find something that helped Ryan. The process was exhausting but the results are there for all to see. "2018: New motto: what we are doing is not working, time to change up our game," wrote Maura. "Ryan's case has inspired countless people around the world with every diagnosis you can think of."