‘9 To 5’ Reunion: Dolly Parton Is Doing ‘Grace And Frankie’

Lily Tomlin said the writers of the Netflix series has created a great role for Dolly Parton and she is excited to share screen with her again. 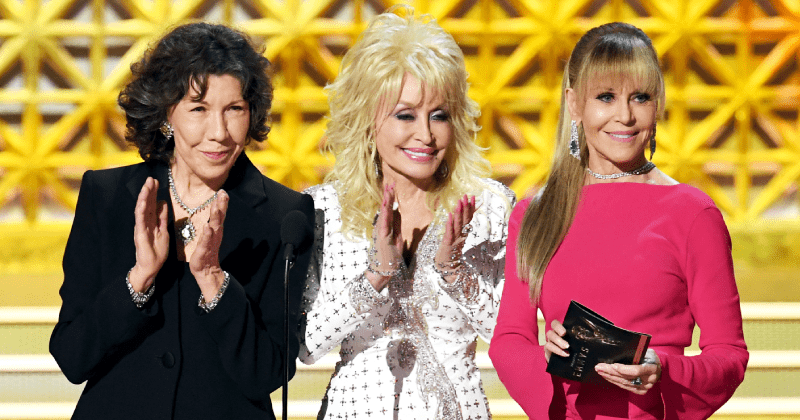 Dolly Parton is all set to reunite with Lily Tomlin and Jane Fonda, her co-stars from 9 to 5. The 1980 comedy became a cult hit and known for the chemistry between the trio. Singer Dolly Parton has finally confirmed she will star in Tomlin and Fonda’s hit show Grace and Frankie. “I’ve been trying to do Grace and Frankie for years,” Parton told Barry Gibb and British TV host Lorraine Kelly on her UK show, Lorraine. The 75-year-old said she would start work once it's safe to start shooting. “We worked so well together on ‘9 to 5,’ it’s a crazy wonderful show. We’ve been trying to write me in somehow. So when it’s safe for us to actually do a production when they’re back, I’ll probably get around to doing that,” added Parton, according to New York Post. 9 to 5 was also Dolly Parton's film debut.

Tomlin had earlier admitted she was optimistic Parton would sign on. “We’re always hoping that will happen,” Lily Tomlin told Hoda Kotb and Jenna Bush Hager on the Today show. “We have a great role for her this time, I think she will do it. I’m just hoping she will.” Tomlin said Parton might film her role remotely as she's very busy. “She’s extremely busy, she’s always writing books or writing songs . . . she’s phenomenal,” said 81-year-old Lily Tomlin.

The Netflix series centers around the unlikely friendship of two women whose longtime husbands leave them to marry each other. The series also stars Martin Sheen and Sam Waterston. The series has been renewed for its seventh and final season. Season six had premiered on Netflix almost a year ago. The shooting of the new season has been delayed on account of the Coronavirus pandemic and is scheduled to start in June.

The singer is considered a national treasure in America. The country singer also made $1m in donations to the vaccine's research, thus playing an important role in the Coronavirus battle. Parton had announced, in April, that she was donating to Vanderbilt University Medical Center in Nashville, one of the trial sites for the Moderna vaccine. Parton's generous gift was helping "several promising research initiatives," including funding an early-stage trial of the Moderna vaccine and a convalescent plasma study and research involving antibody therapies, according to Vanderbilt University Medical Center spokesperson John Howser, reported BBC. Convalescent plasma is being used to treat people who have contracted the infection.

In an appearance on NBC’s Today Show, she said, "What better time right now, we need this. I felt like this was the time for me to open my heart and my hand, and try to help." Jeff Balser, Vanderbilt's president, and CEO, hailed her generosity. "She cares so much about helping others and we are very grateful for her ongoing support. These funds will help us complete promising research that can benefit millions in their battle with the virus," said Balser. Moderna stated that its vaccine showed a highly effective success rate in preventing Coronavirus earlier this month. Moderna added that the study is ongoing and stated it's too soon to know how long protection would last, reported CBS News.

It recently came to light that Parton has been giving away almost 1.5 million children's books a month through her book-gifting program. Dolly founded the Imagination Library in 1995 as a tribute to her father, who couldn't read or write. "In 1995, Dolly launched her Imagination Library in Sevier County, TN, where she was born and raised.  Inspired by her own father’s inability to read or write, she determined that there had to be a way to help children fall in love with books," reads the website.