Astronomers say stargazers from western South America, western North America, Oceania, and eastern Asia can view this on May 26. 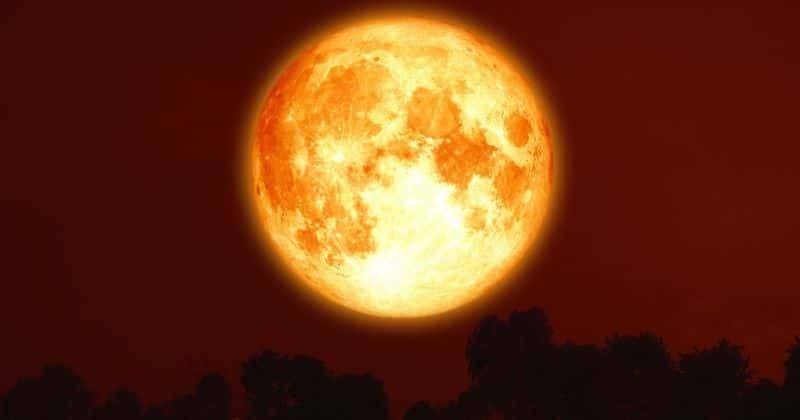 It's the first total eclipse of the moon since January 2019, so get ready to witness this gorgeous sight on Wednesday, May 26. Called the "Super Flower Blood Moon", this week's full moon is the second super moon of the season appearing roughly 222,000 miles away from the Earth at its close point. According to Farmer's Almanac, "This full Moon will also be the second Supermoon of 2021 (the first was April 26th’s Pink Moon). This means the Moon is the closest in its monthly orbit around Earth (known as perigee) at the same time it’s in its 'full' phase."  The Moon will be completely immersed in the Earth’s dark umbral shadow for 14 minutes 31 seconds. WBAL reports that May's full moon is known as the "Flower Moon." Since it is a total lunar eclipse, it is also referred to as the "blood moon" thanks to its reddish tinge which will happen at the same time.

Astronomers say stargazers from western South America, western North America, Oceania, and eastern Asia will have the best view of the phenomenon. "In the U.S., those who are located east of the Mississippi will experience a partial lunar eclipse before the moon sets below the horizon, and those along the East Coast won’t see much of anything, unfortunately," the outlet said. For people lucky enough to be residing in the aforementioned regions, you will find the moon at its brightest and largest at 4:14 a.m. PT. This will be the first lunar eclipse of the decade, arriving over two years after the previous one recorded on January 21, 2019. A partial lunar eclipse is also set to occur on November 19 this year.

Super Flower Blood Moon lunar eclipse this week on May 26. Check your local astronomy and weather forecast for details. pic.twitter.com/gQFJC2KSIK

Super Moon: How does it occur?

Later this month, the moon will put on a fantastic display with a name to match: the Super Flower Blood Moon Eclipse. https://t.co/tPLYZyKxTY

A Super Moon event occurs when a full moon is considerably closer to the earth. This occurs when the Moon's orbit around the earth is oval-shaped or elliptical rather than circular, bringing it closer to our planet compared to the others. The unusual bright sky is caused when the full moon coincides with the moon being at its closest point, giving us the impression that it is both brighter and bigger in the sky.

Where can you catch the Super Moon?

There is no reason to feel disappointed in case your region isn't going to get a first-hand view of the Flower Blood Moon as you can catch the event using a number of webcasts. According to Space.com, you can watch the Los Angeles' Griffith Observatory live stream the moon on May 26, starting at 4:45 a.m. EDT, just two minutes before the penumbral phase of the lunar eclipse starts. The broadcast will end at 9 a.m. EDT after the last partial phase of the eclipse comes to an end. You can catch the stream on the Observatory's Youtube channel here.

Lowell Observatory, the facility that first discovered the dwarf planet Pluto, is also streaming the event on its official channels using multiple telescopes from the Flagstaff, Arizona facility. "Lowell educators will show you live views of the eclipse through our 14” Planewave telescope and wide-view portable Vixen telescopes," the observatory said in a statement. "Educators will also discuss the science of eclipses, the best ways to view them, Lowell’s history with the Moon, and much more!" You can watch it live here.

This is the second moon event of the year as we previously witnessed the Super Snow Moon on February 9. In a release describing the phenomenon, NASA had said: "The Moon will be full on Sunday morning, Feb. 9 at 2:33 a.m. EST. The Moon will appear full for about three days centered around this time, from Friday evening to Monday morning, making this a full Moon weekend. This full Moon is traditionally called the Snow Moon, Storm Moon, Hunger Moon, Magha Purnima, Magha Puja, the Mahamuni Pagoda Festival Moon, the Chinese Lantern Festival Moon, and the Full Moon of Tu B'Shevat." Apart from the moons, astrologers say we will also get to watch two solar eclipses this year.