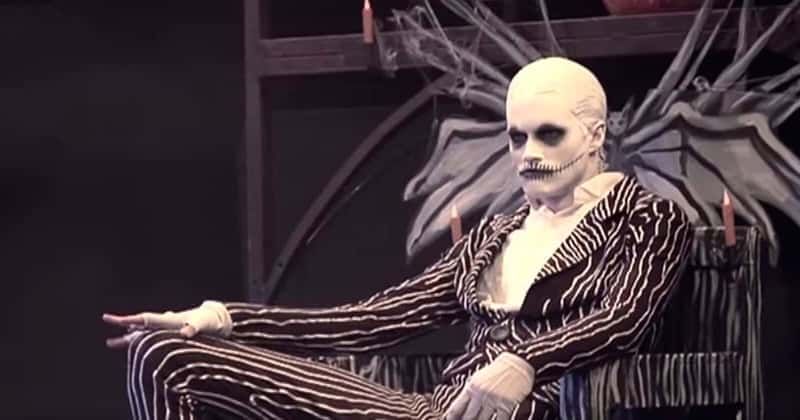 Since its release in 1993, The Nightmare Before Christmas has become a cult of its kind. Tim Burton's popular animated film about the Pumpkin King trying to take over the Christmas season has garnered many fans over the years. And the songs in the film by longtime Burton collaborator Danny Elfman are just as iconic, especially "Jack's Lament" where protagonist Jack Skellington sings about being trapped in an endless loop of Halloween.

One rendition of the song has created quite a stir online. A small-stage performance at the Beverly Hills Playhouse featured a video with actor Matthew Patrick Davis performing "Jack's Lament", reports Pop Sugar.  Fans noted that Matthew's portrayal of Jack Skellington was really good, right from the mannerisms to facial expressions. And not to mention the legs! Shot in a black box theater surrounded by eerie asymmetrical sets, the long-limbed performer proved that the movie deserves a musical!

Many supporters left positive comments on the YouTube video that now has over 4 million views!  Lemur Lover said:  Wow he really captures the physicality of Jack Skellington, although his legs aren't quite long enough for him to move like a spider...I was impressed. Plus great singing voice :) Panic Panda 99945 noted: He moves like a Tim Burton character. Amazing acting. michael ramos wrote: this dude has some long ass legs.

Well, that would be because Matthew is tall; he is 6'8"! In a 2016 interview with Travel and Leisure, the then 37-year-old Matthew shared, “I performed the song in a workshop and my classmates loved it so much that we decided to stage it and videotape it. We didn't have the rights, only our love of the film. It's our impassioned plea to Disney to give people what they want and start workshopping it.” The video was taken in 2008, when a group of acting students at the Beverly Hills Playhouse staged a scene from the film, at a cost of roughly $900. Mattew had his own Broadway debut playing the Geek in the 2014 revival of Side Show. “If I could be Jack, it would be a dream come true,” he said.

While we wait for Disney to come out with a Broadway edition of the classic, in the meantime, we could go and visit a Halloween town inspired by The Nightmare Before Christmas universe. Halloween and Christmas lovers can head to Guelph, just outside of Toronto for this unique experience. The event is hosted by a family who sets up the Tim Burton-esque fest in their front yard each Halloween and it draws thousands of people who are fans of the iconic movie.  It takes place between October 24 to 31 every year. The event description reads: Don't miss the Nightmare Before Christmas Experience this Halloween season. This incredible home yard display features full size replicas of some of the most memorable characters from the hit movie, along with a timed video and light show. This yard display is FREE and suitable for all ages but we are collecting cash donations in support of the Aberfoyle Public School Kindergarten Program. A donation “tombstone” is in front of the display.

The completely free installation features replicas of characters and props from the film, as well as a 10-minute video light show. The spooky graveyard filled with tombstones from Nightmare Before Christmas may be a great place for a photo session. You can even take photos with your favorite (life-size) characters like Jack, Sally, Oogie Boogie, Zero, the Mayor, Lock, Shock, and Barrel. According to a report on Narcity, it draws crowds by the thousands. Over 5,000-6,000 people visit the Nightmare Before Christmas Experience every year and it takes about 9 days to set up. It's less spooky and more fun so all family members will love the event. Since lockdown restrictions may occur at any time keep your eyes peeled for updates on the event. You can check them out on Facebook here.