trending celebrity people lifestyle news animals
You Can Actually Use A Potato To Light Up A Room For Over A Month, Researchers Say

You Can Actually Use A Potato To Light Up A Room For Over A Month, Researchers Say

This discovery was made by a group of researchers at the Hebrew University of Jerusalem a few years ago. 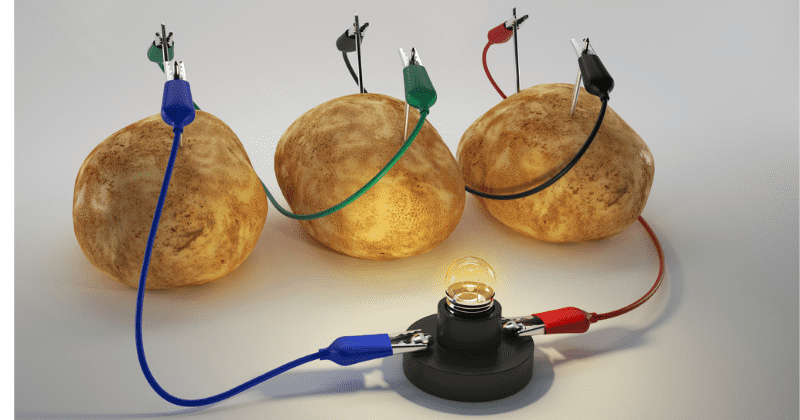 What do potatoes and electricity have to do with each other? A lot, actually! Turns out, a potato can generate enough power to light a room for 40 days. This "shocking" discovery was made by a group of researchers at the Hebrew University of Jerusalem a few years ago. Now, let's get into the science of it all. To generate electricity, you need to boil a potato, cut them into quarters. Now, place a copper cathode on one of the slices and a zinc anode on another. Connect the two by a wire, and pretty soon, you'll have your Eureka moment.

According to Smithsonian Magazine, this cool science hack was birthed by an agricultural science professor Haim Rabinowitch and his team. They were in search of a power system that could provide rooms with lighting for as many as 40 days. Their quest led to the discovery which can help power a cell phone and other personal electronics at the cost of a AA battery in remote corners of the world with little power grid penetration. Does this mean potato is the energy source? Well, no. The potato is simply the conduit that helps conduct electricity by acting as a salt bridge between the two metal rods. Basically, the potato facilitates the free movement of electron current to create electricity.

This brings the question: why did the scientists choose potato of all things? There's a reason for that. Here is Rabinowitch's explanation in an interview with Science and Development Network: "Potatoes were chosen because of their availability all over including the tropics and sub-tropics.  They are the world's fourth most abundant food crop." The root vegetable is said to contain electrolytes that allow for a chemical reaction leading to electricity being formed. In fact, bananas and strawberries also contain electrolytes that can have a similar effect. But, what sets potatoes aside is that it is rich in phosphoric acid and is composed of starch tissue. This allows them to be stored for months without being infested, in comparison to the two fruits which have a short shelf life.

As to the boiling, researchers noted that it reduced the resistance in potatoes by breaking down organic tissues, which allows for the electrons to move freely, increasing electrical output in the process. When researchers cut the potato up into multiple pieces, they found that the electron movement became even more efficient. Though this discovery is groundbreaking and could potentially help millions of households across impoverished regions in Africa, Asia, and the Indian subcontinent, researchers have reportedly run into major roadblocks, according to a BBC report. In terms of economics, a food-based energy system such as the one designed by Rabinowitch and co. can only sustain itself as long as they don't eat into a country's food supply and compete with the country's farmers. Unfortunately, that turned out to be in this case.

Another reason why it isn't being adopted as much as necessary is that it has to contend with other interesting and well thought out alternative sources such as wind and solar power, two of the fastest-growing sectors in the world. Other reports have also suggested that no individuals or non-governmental associations have stepped up to scale the project on a mass scale.