The 33-year-old plus-size rapper and stylist from Fairbanks, Alaska, filmed the August 4 encounter and shared it on her TikTok account which has since been viewed over a million times. 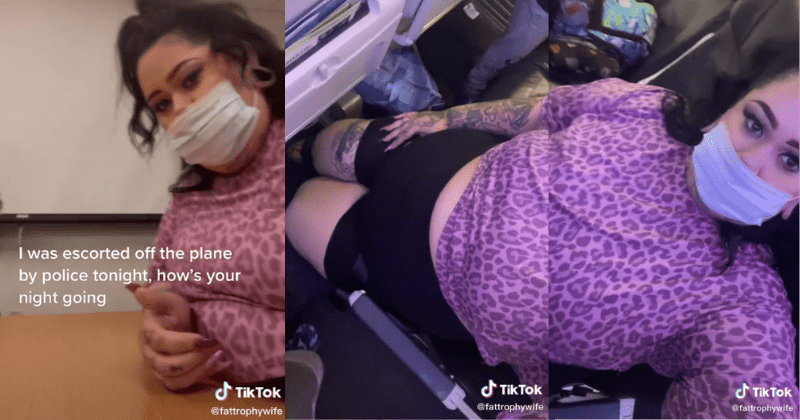 A woman claims she was harassed by Alaska Airlines after its staff removed her from a flight for wearing something the flight attendant deemed "inappropriate." Ray Lin Howard, who goes by her stage name Fat Trophy Wife, says that she was discriminated against just for being a "fat, tattooed, mixed-race woman." The 33-year-old plus-size rapper and stylist from Fairbanks, Alaska, filmed the August 4 encounter and shared it on her TikTok account which has since been viewed over a million times. In the video, Howard can be seen escorted off a flight by police officers. "I was harassed about my outfit," she explains. "I put my shirt back on."

According to the Independent, she accused the flight attendants of constantly harassing her for wearing a crop top and shorts. Howard, who was seen dressed in a high-neck pink leopard print top with sleeves in the clip, pulls up her top and shows the cops the sports bra she had been wearing previously. Despite having covered herself up, the cabin crew continued admonishing her, she claimed. "I put my shirt back on and then they approached me again, saying that I can’t wear this, my stomach is showing and it’s inappropriate," she is heard telling the authorities. "And I said, 'I’m covered up, I’m fine.' And she just kept going. I said, 'If you’re going to kick me off, then kick me off. I’ve done what you’ve asked me to do, I want you to leave me alone.'"

"I’m being harassed and now I’m being detained," she continues sharing her frustration. "I wore an outfit – that’s what happened." The rapper says that the staff approached her three separate times. According to Daily Mail, Howard says she was wearing a sports bra when a flight attendant asked her to wear a shirt and she complied. But then they had a problem with the top she was wearing because her stomach was visible. The cops were finally called when the flight attendants approached her for the third time and she wished to be left alone. In the due course of the video, the officer admitted that no criminal offense had taken place, but noted it was an issue relating to the dress code of the airlines.

"I looked it up – I’m within the dress code," says the woman in tears as the clip comes to an end. But Alaska's Airlines' dress code policy only states, "The dress code on both Alaska and Horizon is casual, and the requirement is simply a neat and well-groomed appearance. Clothing that is soiled or tattered and bare feet is never acceptable. You are expected to use good judgment, but customer service agents will have the final authority to refuse travel for inappropriate attire or appearance," it continued. When the news outlet reached out to the airlines, a spokesperson said, "We’re in contact with the guest. We’re committed to finding out what happened and taking the appropriate actions. It’s our goal to provide caring service to all of our guests. When we don’t live up to that goal, we do everything we can to make it right."

Speaking to Jam Press, she said, "I felt like I was being discriminated against for being a fat, tattooed, mixed-race woman, which in turn left me full of emotions like anger, disappointment, helplessness, humiliation, and confusion." She added, "Throughout my life as a fat person, I've had to deal with fatphobia, especially growing up in the Midwest, but not to this degree." In a follow-up TikTok post, she revealed that the airlines called and apologized to her. They even offered her a discount code for future purchases, an offer that Howard regarded as "hilarious."