Workers in the area said they saw a woman acting suspiciously and trespassing on property in Shasta County. This woman was later identified as Alexandra Souverneva. 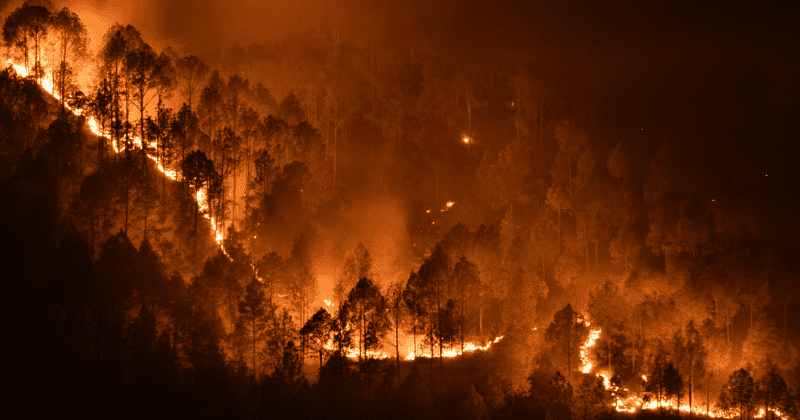 In recent years, wildfires have become quite a common phenomenon in the United States which mostly occur due to the climate crisis. But the same cannot be said for a recent incident where a California woman was accused of starting a quick-spreading wildfire that ended up destroying several homes. Alexandra Souverneva, a self-proclaimed shaman, is facing up to nine years in prison for allegedly igniting the Fawn Fire which has destroyed 41 homes, 90 smaller structures, and is currently threatening 2,340 others, according to News 18. The 30-year-old, who is a former forestry student, pleaded not guilty to the charge saying she had been hiking and trying to reach Canada when the fire raged in Shasta County last week.

Bad year for shamans, from a public relations perspective

In a statement to the forest officials, Souverneva recalled feeling thirsty on September 22 as she came across a puddle which she believed contained bear urine. Initially, she tried to filter the water with a teabag and when that didn't work she attempted to make a fire to boil the urine before consuming it. "She said that didn't work so she attempted to make a fire to boil the water. She stated it was too wet for the fire to start. She said she drank the water anyway and then continued walking uphill from the creek bed," read the complaint. She was then caught in the bush amid the fire and had to alert the fire department for assistance.

When firefighters arrived at the scene, they helped Souverneva and urged her to empty her pockets and fanny pack. The contents of the bag included lighter, CO2 canisters, and "a green, leafy substance she admitted to smoking that day," according to the California Department of Forestry and Fire Protection officer Matt Alexander. Workers in the area said they saw a woman acting suspiciously and trespassing on property in Shasta County reports the Independent. Apparently, the quarry employees told Souverneva she couldn't be on the property but she continued walking.

“Ms Souverneva describes her current job as a shaman. She said that she had found a puddle containing bear urine and attempted to light a fire to boil the liquid. However, she claimed that she could not light a fire, so drank the liquid anyway.”https://t.co/Li5usiGOX3

The next thing they knew, Souverneva emerged near the fire line and requested fire crews to help her. After being removed from the area for evaluation and treatment, Officials conducted an interview that led them to believe that she was responsible for starting the fire. The Palo Alto, California-resident was then arrested and booked into Shasta County Jail. The county’s District Attorney Stephanie Bridgett charged the suspect with felony arson to wildland with an enhancement of committing arson amid the current state of emergency that California is under.

She could face more charges as the fire continues to burn and the investigation continues. "We are aware that there are possible additional fires here in our county that she may be linked to as well as other charges in other fires, statewide," said Bridgett during a news conference. "My office will not hesitate to prosecute (any) person who either intentionally or recklessly starts a fire." Per Souverneva's LinkedIn profile, she was a doctoral student at the State University of New York’s New York College of Environmental Sciences and Forestry. However, she did not complete her studies.

A woman who was attempting to hike to Canada is facing charges connected with the Fawn Fire, which authorities say she started while trying to boil drinking water, according to a criminal complaint from the Shasta County DA's Office in California. https://t.co/u1gEIUR40L

According to New18, she has worked in medicinal chemistry as a research associate in biotech companies Gilead Sciences in Foster City and Nanosyn in Santa Clara. She is a certified scuba divemaster, camp counselor, and yoga instructor who has recently tutored Bay Area students in the sciences. But now is suspected of setting more fires in Shasta county and in other areas of California. The ravaging Fawn Fire, which began on September 22, has burned more than 8,500 acres of remote land facilitated by the hot and gusty winds, according to CNN.

#FawnFire - 9/23/2021 Evening Update
We just posted detailed heat maps from 6pm on The Lookout, along with some analysis of what the Fawn Fire did today, weather forecasts, and spread maps for the fire's movement between noon and 6pm. https://t.co/m8dmVDpoUC pic.twitter.com/rLLA2CWHLG