The Carters continue to do amazing work for the American people even to this day. 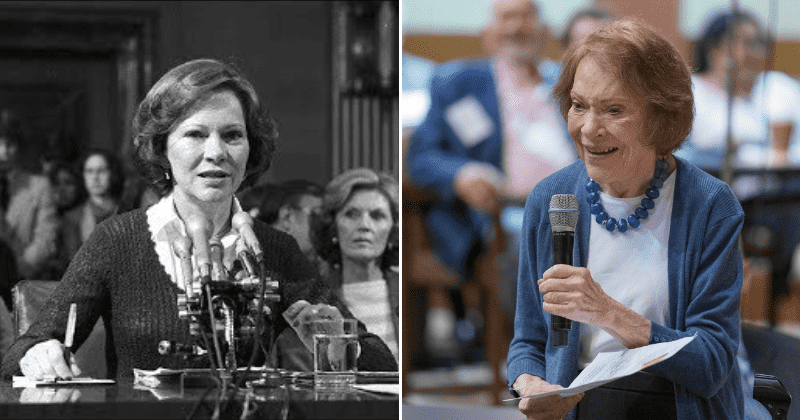 Rosalynn Carter, the former first lady of the United States, turned 93 recently. Rosalynn, the wife of former President Jimmy Carter, served as the first lady from 1977 to 1981. She was born in Plains, Georgia in 1927. She is now the mother of four children and grandmother of 12 grandchildren. According to AJC, she established the Rosalynn Carter Institute for Caregiving (RCI) to support caregivers, both family and professional, through efforts of advocacy, education, research, and service.

Carter thought of supporting caregivers long before it was on many people’s radar. She even co-founded the Carter Center, which fights disease and promotes human rights around the world. Along with her husband, who just celebrated his 96th birthday earlier this week, they became some of the best-known Habitat for Humanity volunteers. This was done as part of their annual Carter Work Project, which has built more than 4,000 houses around the world. They have been doing this for 36 years.

The couple even celebrated 74 years of marriage to set the record as the longest-married presidential couple in our nation's history. “It’s hard to live until you’re 95 years old. I think the best explanation for that is to marry the best spouse: someone who will take care of you and engage and do things to challenge you and keep you alive and interested in life. One of the things Jesus taught was: If you have any talents, try to utilize them for the benefit of others,” Jimmy Carter said of his wife to PEOPLE. He added, “That’s what Rose and I have both tried to do.”

This year, the Carters were hoping to raise $500,000 by President Carter's 96th birthday on behalf of the Carter Family Foundation. They would use these funds to help provide fair and equitable housing for the 600 people who live in Plains, Georgia where they currently live. About 25 houses are in poor condition and five of them need to be razed, reported WUSA 9. This will also be in tandem with Habitat for Humanity. Some of the other causes they have worked for include the cause of AIDS & HIV awareness, education, environmental conservation, mental health, human rights, to name a few.

“We knew that we had undertaken a very enjoyable hobby on the side. We stayed busy doing other things but we devoted 36 years to Habitat,” he said. Some of this work even got him the Nobel Peace Prize. “One of the things Jesus taught was: If you have any talents, try to utilize them for the benefit of others,” he told PEOPLE. “That’s what Rosa and I have both tried to do.” They have been through the former president's cancer and even a catastrophic fall that required 14 stitches on his head and leaving him with a nasty black eye. He believes it was his wife's love and care that keeps him going.

The former first lady has for 46 years campaigned to end the stigma of mental illness through the Carter Center. She has been fighting to raise global awareness of mental health issues and to remove the barriers that prevent people from receiving proper care, as per a report from Philanthropy Age. The couple has even co-authored a book called Everything to Gain: Making the Most of the Rest of Your Life with practical advice from them about exercise, good health habits, and hard, useful work. They encourage the readers to try and make a difference and how best to overcome difficulties.

Everything to Gain: Making the Most of the Rest of Your Life USD 25.39https://t.co/Y5vYJmZCMc pic.twitter.com/c4vTa7Pi20