When she faced criticism over her decision to take her young son to the protest, she attributed her move to "freedom". 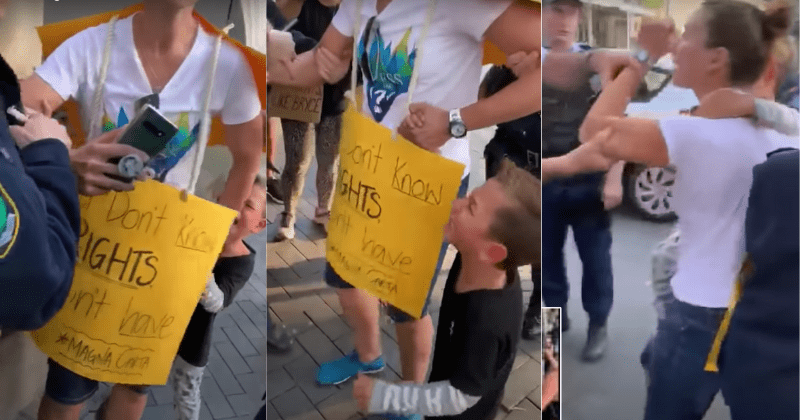 It is quite irresponsible parenting to bring your child to a protest against lockdown, a measure taken to control the spread of the Coronavirus. But Renee Altakrity a 36-year-old mother of 3, decided to bring her 4-year-old son to the protest. The Sydney native was among dozens of protestors outside NSW Parliament who flouted the rules to protest. They were wearing a sign that read, “If you don’t know rights, you don’t have any. Magna Carta”, according to 7News.

I want. Foolish protest and ridiculous to take a child.

Her son was visibly distressed and shouted “leave mummy alone”.  Renee blamed authorities for the situation. She said that the police were heavy-handed, leaving her hysterical son terrified. “I’m in the back of a paddy wagon, they singled me out, they bullied me from the group,“ she said. NSW Police Deputy Commissioner Gary Worboys told the media that the "lady was approached by police, asked to provide some particulars so a very simple process could then take place but for whatever reason, she became quite hysterical."

She was arrested and fined $1000 for breaching social distancing after ignoring move-on directions. According to The Daily Mail,  Renee Altakrity is an anti-vaxxer and cosmetic nurse. She is now accused of illegally running her beauty salon business in breach of coronavirus containment restrictions. She is allegedly offering beauty services at her Flawless Features salon despite such salons being closed.

When she faced criticism over her decision to take her young son to the protest, she attributed her move to "freedom".  "The point for me exercising our rights is to stick up for ourselves and have freedom of speech. My son wanted to come with me. He said: "Mum can I come? I'd love to put a sign up about the fact that I want to go back to the skate parks and not feel scared. I don't keep my kids in the shadows... my children are very aware of what is going on and I think it is very important our children know how to handle themselves and have a freedom of speech, even at four."

So-called "mother" #ReneeAltakrity, brought her young child to a protest. She antagonised the police to the point of arrest, leaving her poor child hysterical & clinging to her. She should be charged with child endangerment & child abuse, & have a thorough FACS investigation.

For her, freedom of speech is more important than having an unvaccinated child out in public in the middle of a pandemic. Despite admitting she is "not a scientist or doctor" this mother believed a more targeted quarantine would have been a better option. Of course, her medical opinion would make more sense than trusting doctors and health professionals. "I would've talked about possibly quarantining the sick, not the healthy," she said. "There is no reason healthy people shouldn't be allowed to go about their lives. That's all I've got to say about it. I don't think its been handled with common sense. My children are very opinionated, they probably get that from me, but he had every right to be there," said the "sensible" mother.

Australians can leave their homes for exercise or essential reasons but must keep a 1.5-meter distance from others. And in the coming weeks, lockdown restrictions will be more relaxed so it is unclear as to why Altakrity is risking her health and children's health. "I don't know how you guys are going home in honour tonight and trying to infringe me with a notice which I don't consent to because we're doing nothing wrong," Altakrity told the group of officers at the time of the protest. "You guys should be here holding the signs with us, defending us. I don't consent to what you're doing." She said she was not 'acting in aggression' and that she did not consent to sharing her name.

I hope she cops a Family Services investigation for putting her child in that position. Who takes their child to a place where social distancing is not going to happen in the days of Covid? Bloody irresponsible.

When she was being arrested and her son screamed nearby, she said, "If someone can please send legal representation. I cannot believe this is happening. This system is absolutely bulls**t. They singled me out. They singled me out... Why? I was just exercising my rights like everybody else." Many believe that she was using her child as a shield and was being an irresponsible mother. Others compared her to Australia's Rosa Parks. Which is just.... outrageous. We can't even!

THANK YOU @dbongino! #ReneeAltakrity is Australia's Rosa Parks! Rights not used are forfeited. She used hers and we need to rally behind her. NSW Police had to shut down their FB page - not just the irrelevant post on which they were slated. Absolutely fried! https://t.co/vtJezEPPjK

This stupid oxygen thief should be fined for “protesting” aggressively with a young child, let alone all the other stupidity she is involved with.#ReneeAltakrity you’re a moron. https://t.co/sTeqpB4QUr