Art Teacher Tells 6-Year-Old She Painted A Picture 'Wrong', Others Are Calling It A Masterpiece

The heartbroken girl's mom took to Twitter to share the picture and was flooded with positive messages. 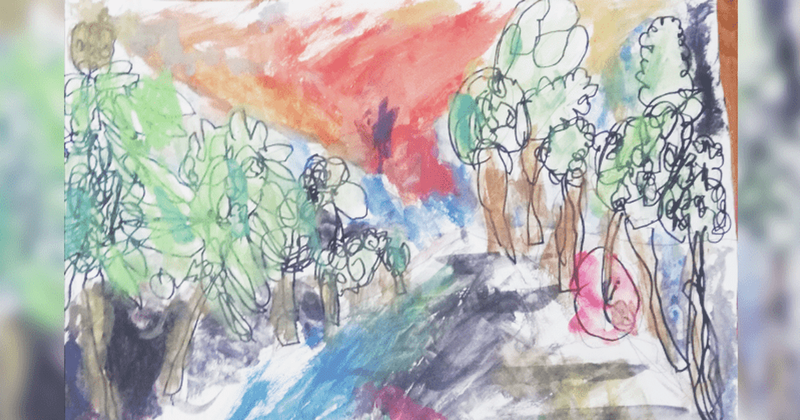 Beauty is in the eye of the beholder, is it not? When it comes to art, it's a form of self-expression, so how can it ever be "wrong"? Especially when it comes from young children who are just discovering their capabilities. Shouldn't we be encouraging that, instead of categorizing art into "good" and "bad" or "right" and "wrong"? One teacher told a clearly talented 6-year-old that she had painted a picture "wrong". The toddler was left heartbroken. Her mom took to Twitter to ask what the Internet thought of the little girl's painting. . Twitter user Gemma Leighton wrote: My 6-year-old daughter painted this amazing scene. Her art teacher told her she had done it wrong?! You can’t do art wrong! She was so upset as art is her favourite thing to do. The 6-year-old student's art piece went viral! The painting featured a tree-lined path leading to what seems to be either sunset or sunrise on the horizon. Many artists on Twitter chimed in to say that the painting was a masterpiece. There's a lot of expression and perspective in the artwork, they claimed, which is saying a lot because the artist is only 6-years-old!  The girl's mother went on to ask, “Can you please show Edie some support and like her painting?” And the response has been positively overwhelming. Have a look!

Edie your art is beautiful and engaging and provocative and makes me want to take a walk right inside of it. It’s a lot of things but it’s definitely not wrong. https://t.co/EviIzJw2OA

I told her how amazed I was by her use of perspective, that's when she told me the after school club teacher told her she had done it wrong?!
I'm so glad I uploaded it to twitter, the positivity for it has been amazing..!
Thank you 💕

My little boy can draw a circle with stick arms and legs sticking out of it... and says that's you mummy.. haha.. he will be 6yo in August.

So this is amazing, for an adult to do, let alone a child.

That teacher is the only thing wrong with this situation.

The response to Edie's painting has been so massive that "Edie" even began trending on Thursday morning! "Honestly, I am absolutely blown away from all the amazing positive comments about Edie's painting," Gemma responded, according to Too Fab. "I wasn't expecting such a response! Thank you to all of you who have liked and left comments. You have made one little 6-year-old very happy indeed."

6? I’d say very good! She clearly understands perspective&her colouring draws your eye onward along the pathway deep into the picture in a very satisfying way..My Dad was an artist&designer-a good one,&I’m pretty sure he would say that for 6 it shows a lot of promise! Keep going!

Edie, I will never forget coloring a horse blue when I was about your age and being told it was wrong. I believed it. I shouldn’t have. Why can’t you draw a blue horse? Don’t let anyone tell you how to do art. Math is right or wrong. Art never is.

As an artist I can tell she is expressing what she sees. It is good I see she prefers kinda Monet type style. Her teacher is wrong, every child should be encouraged to pursue his or her talent as an artist. Dear Edie, do not pat attention to negativity, do what makes you happy.♥

Many Internet uses highlighted the drawback of an authority figure dampening a child's spirit and calling their means of expression "wrong" or not good enough. Edie's mom responded saying, "I am hearing from quite a lot of people with similar stories that a mean art teacher put out their creative fire.. It's so sad.. I am so thankful for everyone's comments because it's given my little girl such a boost in confidence with her art."

When I was in middle school my English teacher told me to stop writing rhyming poems because they were too juvenile. I never stopped though and making rhyming poems has been my career for over 20 years! Your painting is perfect! Keep it up! Don’t worry what anyone else thinks. ❤️

Gemma, show Edie this picture by the French artist, Raoul Dufy, and please tell her that her painting reminded me of his pictures. I would get Edie's picture made into a card or canvas print, or both, on Snapfish, and hang it in the house. pic.twitter.com/qeEH6X8StW

That's a terrific piece, Edie.
I'd love to frame it and display it for all to see. pic.twitter.com/N72NbZW9LH

For those who'd like to follow the 6-year-old's work, go here. You can even purchase the painting here. Prints are priced at £12 Inc. P&P with proceeds going to @createcharity.

I have created a page for Edie's art as a space for all children to upload their magnificent creations!
This was suggested to me in the comments yesterday and we loved the idea!
Give it a follow @EdiesArt

Edie would like to thank everyone for the kind and encouraging support.
She feels much more confident than she did this morning and will continue with her art and is apparently now opening an etsy shop (first I've heard of it😂😂😂)

And a huge thanks from me too.. You're all ace pic.twitter.com/23rjcHBh5S