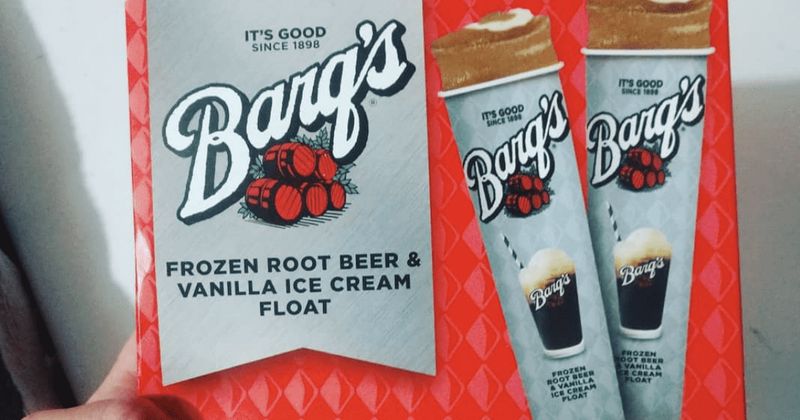 Love root beer? Love ice cream? Now, get the best of both worlds thanks to Barq's Frozen Root Beer & Vanilla Ice Cream Float Tubes.  Barq’s is revolutionizing the popular drink and putting it in a tube. In each box, you'll get 24 squeeze-up tubes, each of which holds 3 fluid ounces of nostalgic creamy goodness. This makes for a great pick-me-up and is easy to eat thanks to the enjoyable on-the-go tube. PureWow says you can find Barq's genius creation at your local grocery store and on Instacart.  You can also find this icy treat right in the frozen section at your local Aldi.

According to Matt Mitchell from It's A Southern Thing, he writes: The vanilla ice cream is perfectly swirled around the frozen root beer inside the tube. All you have to do is push up on the bottom of the tube and the root beer float comes to you! And the best part: the balance of root beer to ice cream is always perfect. Because nothing is worse than finishing off all your root beer while a whole scoop of vanilla ice cream is left at the bottom of the cup. On YouTube, a group of taste testers tried the  Barq's Frozen Root Beer Ice Cream Floats. The panelists consisted of some people who hated root beer (WHAT?) and others who'd never had a root beer float before (DOUBLE WHAT?). Did they like it or hate it? Check out their reactions below:

People on Twitter seem to like it for the most part. phillyironlung wrote: Root Beer floats are that thing you forget how good they are till it strangely pops into your head. Best use for vanilla ice cream by far.JasonCaterina said that he's a fan of root beer barrels to which MissyJHolland replied: Also love those vanilla ice cream pops that are coated with frozen root beer. A frozen root beer float. Hashtag #blessed! lol.  aldireviewer noted that the Barq’s Root Beer and Vanilla Ice Cream Float cost $2.99 for a box of 8 tubes. The review also did point to a flaw with the ice cream treat. They stated: The tubes certainly have the flavor of ice cream and root beer. The problem, of course, is that they’re not carbonated, so that bubble you get with a true root beer float isn’t here. Instead, you get the caramel-like flavor of root beer and the vanilla flavor of vanilla ice cream.