In the small seaside town of Oudenburg sits no less than 90 “candles” lining the streets that look very much like penises all in a row. 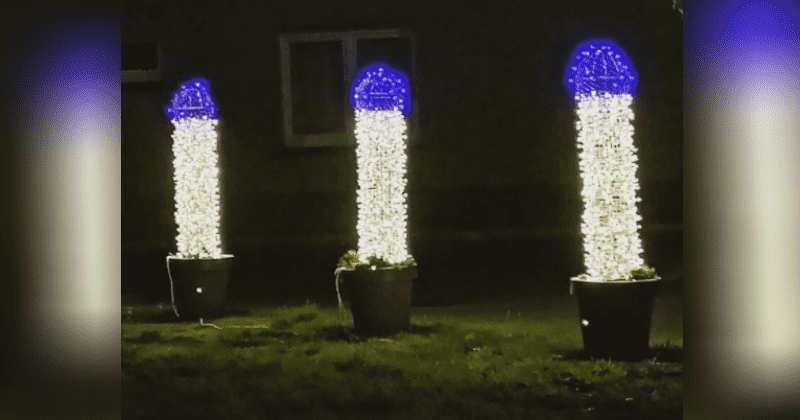 Christmas is a-coming and we have plenty of things to be excited about. One of our favorite rituals around this time each year is choosing, decorating, and lighting the gorgeous Christmas lights which add make for the festivity in any house or building. Over the decades, we have gone from traditional lights to varying colors to all sorts of shapes and sizes, and it just keeps getting better. Take this seaside town in Belgium, for instance, who have decided to turn their Christmas lights into something very peculiar.

Catching a quick flight to Belgium is easier said than done this holiday season, as non-essential travel restrictions from outside the European Union have been mandated due to the global pandemic. That's too bad as we won't get to visit the town of Oudenburg, where there sit no less than 90 "candles" that line the streets. Now the thing about these candles is, they look like penises in a row when lit up. The blue and white structures were supposed to resemble candles, but when the lights go on, they look remarkably… not like candles. Art and innovation have always remained a mainstay in European tradition and culture, and this is quite the reflection of the 21st century now, isn't it?

Oudenburg has a population of 9,000 people and is famous for its Roman museum and escape room. The town's mayor Anthony Dumarey said that the designers had originally been planning to use these candles as a lovely way to commemorate 2020. However, they decided at the last minute that a flame was just too cliched. Instead, they would replace it with a blue ball which solidified the phallic shape once the "candle" was lit. Dumarey went on to blame the town’s budget and throw the tech department under the penis-shaped bus. “We were on a limited budget, so our technical department designed the illumination by itself,” he told reporters. “In any case, we wanted to move away from the classic flame or candle-themed illumination.” “Of course, it was not our intention to install Christmas lights that remind people of a penis,” Dumarey also told local newspaper HLN.

“We had the idea of installing candle-shaped lights,” Dumarey said by telephone on Friday. “Some people see other things,” he told The New York Times, that the display would stay, insisting the display would stay since it’s given everyone a bit of joy that is much-needed right now. “I’m very happy to put a smile on people’s faces, and to bring light in the darkness.” There have been over 15,000 fatalities from COVID-19 in Beligum alone this year, which is the highest death rate per capita in the world, according to a New York Times database. The country is back on a nationwide lockdown with all nonessential shops closed, working from home mandates, and visits between households not allowed. Other countries in the region are speculated to follow suit on similar mandates.

If states were countries, here’s the global ranking of DEATHS per capita over the past week:

Dumarey, meanwhile, is taking it all in stride, even posing next to a candle, and saying in part, “All of Flanders is currently talking about the Christmas decorations in the municipality of Ettelgem. It shouldn’t always be a stiff thing, should it? We’ll add the Christmas balls later!” He also told the Evening Standard that the reactions have been quite entertaining. “A woman told me laughing that she would also like a big Christmas pecker at her door,” he said. “Some people snap photos with them with thumbs up. It is certainly the most talked-about Christmas illumination in the country.”

Some people’s minds could do with a wash!
Could be worse though.
Suggest the complainant doesn’t visit Belgium this Christmas!🤣🤣🍆https://t.co/C6SenlXurv