She supports multiple animals groups and has been a trustee of the Greater Los Angeles Zoo Association for 40 years. 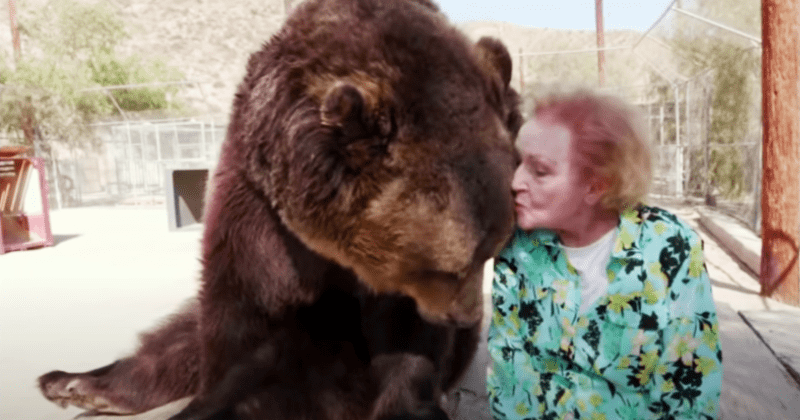 "I have to keep doing my acting jobs so I can support my animal causes," said Betty White. Nothing sums up the actor more. White is a sucker for animals and anyone who follows the iconic TV actor knows that. She might be 99-years-old but her zest for life, and animals, is still burning strong. The actor holds the Guinness record for the longest TV career, having started acting in 1939. She has an impossible 82 years of acting on her resume. She touched upon her love for animals in her documentary titled, The First Lady of Television. White said she'd rather be remembered as an animal advocate than a famous actor. "That’s my life. The reason I work, the reason I do anything is for my love for animals," said White, reported Do You Remember.

One clip that stands out from the 57-minute film, is the actor sitting side-by-side with a giant brown bear at the Los Angeles Zoo. In the clip, Betty White can be seen casually sitting beside the bear, feeding it, hugging, and kissing the animal. While the clip might be slightly scary for most, the video shows, more than anything, that Betty White is at home with animals. The video shows her chatting with someone while nonchalantly feeding the beast marshmallows. Fellow actor Georgia Engel reveals in the documentary that her animal activism was the driving force behind her acting career. "She says all the time, 'I have to keep doing my acting jobs so I can support my animal causes,'" said the late Engel. White has been supporting many animal groups including the African Wildlife Foundation, Los Angeles Zoo Commissions, the Morris Animal Foundation, and several other animal conservationist groups over the last 50 years.

For close to 40 years, White has served as a trustee of the Greater Los Angeles Zoo Association and has advocated for the zoo's work, educated the public, and help to conserve endangered species in the wild, reported Smithsonian Magazine. She has even written a book about the experience titled, Betty & Friends: My Life at the Zoo. It is a scrapbook of her favorite animals, with photographs and anecdotes. When asked about her first memory of her love for animals, she replied, "Oh, it is so embedded in me. Both my mother and father were tremendous animal lovers. They imbued in me the fact that, to me, there isn’t an animal on the planet that I don’t find fascinating and want to learn more about."

In the interview with the magazine, she also made a case for zoos. "So many people have a closed mind on zoos. They think no animal should be in captivity, they should all be in the wild in their own habitat. Well, of course, that is a myth," said White, before reminding that humans had already invaded much of the natural habitat of animals on the pretext of development. "What the zoos do, that some of the “zoophobes” don’t understand, is work not only with the captive animals but also with the dwindling populations in the wild. What they learn from the captive animals they can apply to the populations in the wild. In many cases, species are still around that would not be without zoos," added the actor.

The actor turned 99 on January 17th and she used the occasion to share a video of an old series called Pet Set, featuring animals including dogs and a baby elephant. The actor was recognized for having the longest TV career, in 2014, by Guinness World Records. She even featured in a made-for-TV Christmas movie at the age of 98!