Bindi Irwin Recreates Iconic Picture Of Her Parents With Her Husband, 20 Years Later

Bindi Irwin is expecting her first child with her husband Chandler Powell. She is currently in her third trimester. 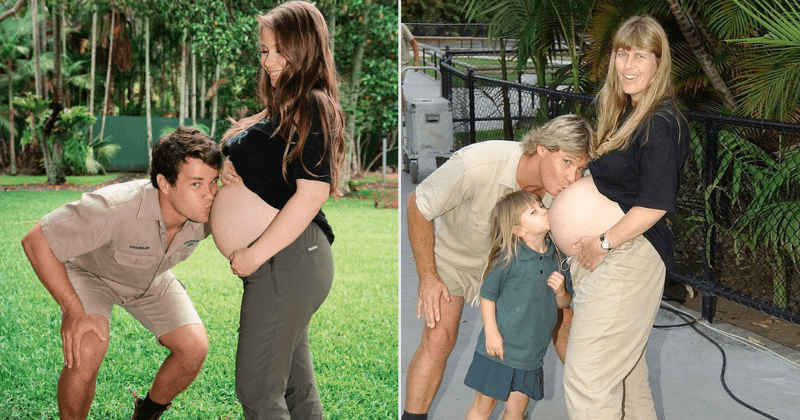 21-year-old Bindi Irwin has been giving her fans regular updates on her pregnancy be it when she announced her pregnancy last year to now re-creating an iconic photo of when her mother was pregnant with her sibling. In the picture, Terri Irwin, Bindi's mother was pregnant with her second child, Robert (now 17), a picture of the late Steve Irwin and Bindi was kissing her baby bump was taken. Bindi decided to adorably commemorate her late father by posing similarly, as her husband, Chandler Powell, 22 kisses her bump.

Bindi shared the picture on Thursday and captioned it, "Recreating a very special moment. Third trimester love."  Since being shared, the picture has been liked over a million times. One fan named stevemaraboli commented: Love this! Such a beautiful moment! What a lucky baby girl she is! She’s already loved beyond measure. Another named maryanneoliverartis added: Awwwww this is adorable!

Bindi married her longtime boyfriend, Powell, in March last year. A few months later on August 11, 2020, she announced her pregnancy on Instagram with a sweet picture of the couple both holding a mini khaki shirt. She captioned the picture: Baby Wildlife Warrior due 2021. Chandler and I are proud to announce that we’re expecting! It’s an honor to share this special moment in our lives with you.

Bindi was then in her first trimester and said she wanted her fans and followers to "be part of our journey from the beginning of this new life chapter." In another post, a month later, the couple shared a sonogram of the soon-to-be-born child. While Powell was seen holding a koala, Bindi was holding a copy of the sonogram while cuddling a joey swaddled in a blanket. The picture was captioned: The animal joeys we care for are excited to meet our human joey. ❤️ Baby Wildlife Warrior is about the size of a hummingbird now!

Some weeks later, they shared yet another sonogram while Bindi was seen cuddling, this time, a tortoise. The picture was captioned: Baby girl, you are our world. Our beautiful daughter is now about the same size as a hatchling Aldabra tortoise and is as healthy as can be. We can’t wait for her arrival next year.

When asked about how she felt the first time she knew she was pregnant, Bindi told PEOPLE, "I took a test and ran into the kitchen where Chandler was making us tea. He didn't hear me come in so I speechlessly watched him pouring the water into my most loved hedgehog mug. This news would change the course of our future in the best way. I started crying tears of pure joy and told my sweetheart husband that my test was positive. We were beaming while our adorable puppy Piggy sat on our feet wondering what was going on. It reminded me of just how perceptive animals are. It is such a blessing knowing that this tiny person has chosen us as parents. Our baby Wildlife Warrior is going to be so very loved by our families and entire Australia Zoo team. I can't wait to find out what this amazing new soul loves in life, and experience the world all over again through their eyes"

There were reports that suggest that Bindi became pregnant even before she was engaged. A source told Ok Magazine that the couple wanted to marry when Bindi was just 19 years old but was stopped by Terri who asked her daughter to wait till she was 21 years. "They've upheld their end of the bargain so now they can't wait to start trying for a baby. Bindi's already told her friends that she doesn't want to be fussed over even if she is going to be a pregnant bride," said the source.