Right before the incident, the singer was heard telling the crowd that she needed to relieve herself and that there wasn't enough time for her to make it to the bathroom. 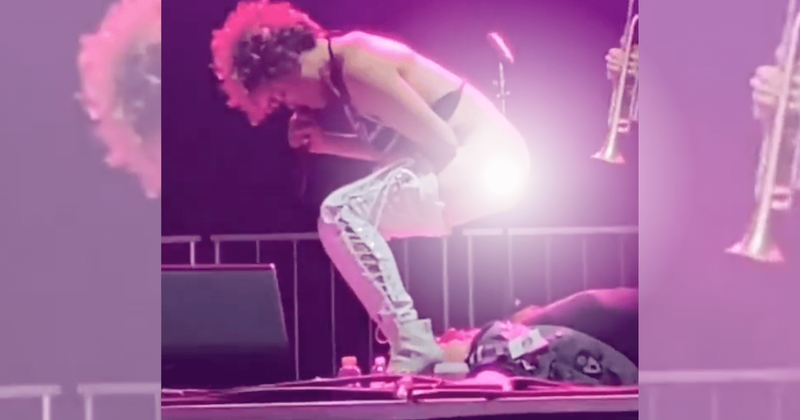 Fans who attended the recent performance of cover band Brass Against at the Welcome to Rockville festival went home shocked after frontwoman Sophia Urista appeared to urinate on an audience member. Right before the incident, the singer was heard telling the crowd that she needed to relieve herself and that there wasn't enough time for her to make it to the bathroom. Urista reportedly invited one of the fans on stage before asking him to lie down. Then, she pulled down her pants and began peeing on his face while continuing to sing.

"Get my man with the can on his head ready, 'cause we’re going to bring him onstage and I’ma p*** in this motherf***er’s mouth," she said according to The Independent. "I gotta pee. And I can’t make it to the bathroom. So we might as well make a show out of it." Video clips of the show in Daytona Beach, Florida, went viral while people immediately slammed the singer and described the moment as "disgusting." Responding to the criticism, the New York-based band - which is known for covering songs by famous bands like Black Sabbath and Soundgarden - took to Twitter and apologized for the stunt.

Cover band, Brass Against's frontwoman, Sophia Urista could be seen peeing on a fan mid-performance in a now-viral video. https://t.co/Tg1L8Rdh7D

They noted that Urista, who was performing a rendition of Wake Up by Rage Against the Machine, got carried away. "We had a great time last night at Welcome to Rockville. Sophia got carried away," they wrote before assuring their fans that it would not happen in the future. "That's not something the rest of us expected, and it's not something you'll see again at our shows. Thanks for bringing it last night, Daytona," concluded the Twitter post. There were some who didn't see anything wrong with the act, which they described as empowering. "It was a consensual act of badassery! I feel empowered! Gained a new fan, really like your music too so today is a great day!" shared user Traci.

I find what Sophia did uplifting and empowering. ❤️❤️❤️❤️❤️

"Agreed, it was f**king epic and consensual, but more importantly it was art because it was pure spontaneity, came here looking for the own, disappointed to see the lack of it…" wrote user Tracey Lynn. But many simply could not approve of the act of peeing on a random stranger. "So if I guy did that wouldn't there be outrage and call for arrest and the cancel culture out for blood but since it's a woman we'll call it female empowerment that's twitter culture in a nutshell," noted one user. "Hell no that is disgusting," expressed Shelby Stevens.

Nasty. A minimum of decorum, even if it's rock and roll.

Meanwhile, some people were extremely curious to know whether the whole thing was a pre-planned sham. "I desperately want to know this full story. Was this planned in advance? Did this guy like... pay to have this happen? Did she mean it to be aggressive but he ended up being into it? I NEED ANSWERS," asked user @GlassBalloon. Responding to this, user @BigOleBeanBag wrote, "She kept saying she needed to pee. Somebody in the front row offered. She obliged. It was a completely spontaneous moment."

Own it. Real metalheads love moments of shocking absurdity. I'll always be a fan, but not backing up your singer and shaking it off as a bit of"one-and-done" stage antics was incredibly crappy. Sophia is metal AF and you all should embrace it 🤘

But this explanation didn't satisfy the user, who noted, "She just spontaneously picked the guy... with the GoPro on his head? Granted it fell off before the floodgates opened, but still. Ya decide to pee on someone and go w/ the guy most likely to have detailed video evidence?? So many choices here I don't understand!" The band, which describes itself as "a collective with the goal of creating music to inspire social and personal change" did try to appease the crowd by responding to many of their comments, even revealing that Urista herself cleaned up the stage afterward.