Footage shows the mother trying to reach him while the son attempts to climb back up, only to fail. 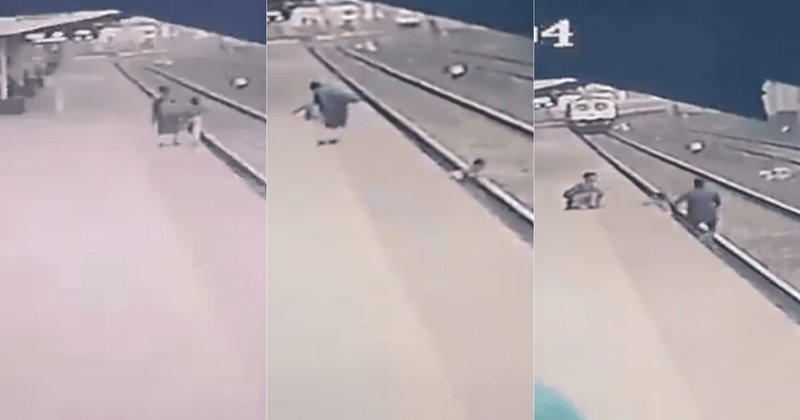 Kids are notorious for getting into trouble when parents look away even for a second. In such a tale but with higher stakes, a young child was walking adjacent to a railway platform with his mom in tow. In footage released on Monday, the boy guides his visually impaired mom to the edge of the platform and falls on the tracks as a train approaches from the opposite direction. Not knowing what to do, the mother tries to reach out to him while the son attempts to climb back up only to fail. As all hopes evaporate, a railroad employee gallops from down the tracks and manages to lift the child onto the platform before leaping onto the platform himself, CNN reports.

At Vangani station of Central Railway, Pointsman Mr. Mayur Shelkhe saved the life of a child just in the nick of the time. He risked his life to save the life of the child.

We salute his exemplary courage & utmost devotion to the duty. pic.twitter.com/V6QrxFIIY0

The CCTV footage shared on Twitter by India's Ministry of Railways revealed that the incident that took place at Vangani Station in Mumbai encapsulates the selflessness displayed by Mr. Mayur Shelke. "We salute his exemplary courage & utmost devotion to the duty," the Ministry wrote. So far the video has been viewed nearly a quarter of a million times with thousands of people coming together to applauded the railroad worker's bravery. Responding to the clip, a user wrote: "Congratulations to the dangerous effort taken by the gentleman and saved the child. Why was the flag's man giving a green signal to go ahead? Couldn't he just run with the red flag and stopped the train?" Another user wrote: "Salute to the pointsman who saved a life."

Later that same day, local staff and Divisional Railway Manager for Mumbai Division of Central Railways commemorated Shelkhe's bravery by giving him a standing ovation. In the midst of this, a local entrepreneur named Abhijit Deshpande also appreciated Shelkhe's efforts and offered to sponsor the education of the saved child till he is 18. He even added that his firm would sponsor Shelkhe's child till he was 18 as well. "...as we have understood that the mother is visually challenged and she is doing everything possible to raise this God blessed child, we just can’t stop ourselves from helping him too!", he wrote. Indian Railways is the world's fourth-largest employer in the world with as many as 1.3 million employees. It is also the largest employer in the country.

Congratulations to the dangerous effort taken by the gentleman and saved the child. Why was the flags man giving green signal to go ahead?? Couldn't he just run with the red flag and stopped the train??? I could be wrong pls excuse me if so.

In another story of bravery we had reported earlier, a 20-year-old named Derrick Byrd suffered burns and had to be covered with gauze on the face, neck, arms, and back after he suffered serious burns while saving his 8-year-old niece from a burning house. Even though he was recovering in a specialized care unit at Harborview Medical Center in Seattle, he had no regrets. In fact, the young man claims he would do it all over again for his niece Mercedes and nephews, Junior and Rory.

How the hell station master flagging Green.. he should be running with red flag to stop the train. Just imagine if he was failed 🤦‍♂️ Unsung hero he is.. Train ur station masters how to react first..

According to a report by CNN, when a fire broke out at the home in Aberdeen, Washington, on Thursday morning, Byrd's sister and the 3 children were trapped inside a room on the second floor. The 20-year-old ran out of the house through the flames so as to get the kids out safely through the window. Recounting the sequence of events to 14 News, he revealed that while 6-year-old Junior and 4-year-old Rory managed to jump out the window and into his arms, little Mercedes was too afraid.

@PiyushGoyal Standing salute to Mr Shelke. Inspiring from him, we at Conchem Labs would like to sponsor the education of the Saved Child till he is 18. Can we get in touch with the child’s Family.? Can someone help me with contacts? Or we can be reached: info@conchemlabs.com