The thoughtful staff made a quick wedding dress for Raquel Bruno using a hospital gown and a sheet. They also handed her a bouquet of yellow flowers. 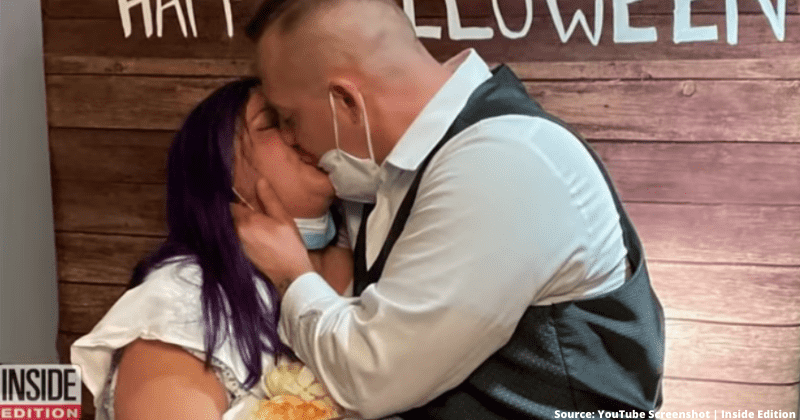 Like many brides, Raquel Bruno too wanted to get married before having her baby. But by the time her wedding date arrived, she was heavily pregnant. However, this didn't affect her excitement in the slightest as Bruno was keenly looking forward to starting a new chapter alongside the love of her life, Raymond Bansemer. Everything was set, all that was left was for the mom-to-be to walk down the aisle and exchange vows with her doting partner, according to PIX11. But as she was getting ready on the day of the wedding, the New Jersey resident realized that the ceremony wasn't going to go as planned. Why? Well, her water broke 45 minutes before she was scheduled to exchange rings even though the due date was a little over a month later, on December 6, 2021.

"I was very shocked," Raquel recalled while speaking to Inside Edition. "I was in the middle of applying my makeup, had a half-face of makeup on and the water broke and I ran to the bathroom. And I couldn’t believe it, I’m like, no this is not happening. But it did." It seemed as if the baby had rung right on time to give her parents a Halloween surprise that they would remember all their lives. Given the situation, the only sensible thing to do was to rush Bruno to the Hackensack Meridian Raritan Bay Medical Center.

The couple married at the hospital that same day and Raquel Bruno delivered a healthy baby girl the following afternoon. Congrats to New Jersey's very own! 👶💞

But even as the would-be parents arrived at the hospital, they couldn't help but think about their wish to get married before welcoming their child. "It was important to us, especially since we were engaged prior to the baby coming, we wanted to be married, husband and wife, having a baby," shared Bruno. So when they expressed this desire to the staff at the hospital, the kind members decided to help them fulfill their dream. Without wasting a moment, they got to work and in no time, the boring hospital walls were replaced with wedding decorations.

A New Jersey couple’s wedding did not go as planned after the bride-to-be went into pre-term labor minutes before their scheduled wedding ceremony.

The couple was scheduled to get married Sunday afternoon, but the woman's water broke 45 minutes before the ceremony began. pic.twitter.com/c42GI1TyaK

The thoughtful staff even made a quick wedding dress for Bruno using a hospital gown and a sheet. They also handed her a bouquet of yellow flowers. There was no time to waste as the baby was on the way and so medical resident Nadia Aurora immediately went online to get ordained. She performed the wedding ceremony right in the hospital as Bruno and Bansemer became man and wife just before welcoming their precious baby girl, Lilith, who weighed 5 pounds, 5 ounces.

"It was amazing what the hospital staff did to make sure our special day still happened, and they did such a wonderful job," said the mother and now wife, thanking the hospital staff. Members of the hospital staff even arranged for a cake so that the happy couple could celebrate the joyous occasion with it. Apparently, this isn't the first time that a wedding was taking place at the hospital, according to its spokesperson, Theresa Dowd. That being said, it sure was the first wedding that was conducted in the labor and delivery unit.