Tess Wright's brother Kade decided to teach the creep a lesson by donning the bathing suit himself and posing gloriously for pics. 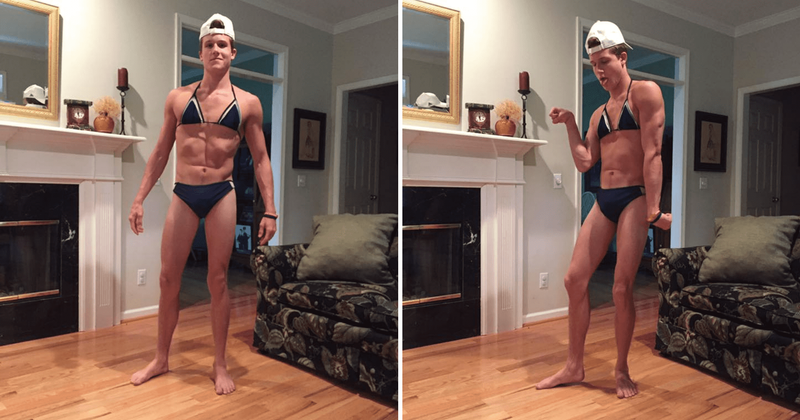 Sibling rivalries are intense. Many often act like they are each others' arch-nemesis. But, when an outsider threatens either of them, the other tends to become their guardian angel. Given how there are random creepy men harassing women online all the time, a caring sibling's watchful eyes helped deal with the awkward situation better. Tess Wright, a Facebook user, was on the receiving end of an unprompted sexual jibe when she wanted to sell a bathing suit on the platform. As you may have guessed, a guy crept into the comment section and asked to see a picture of it being worn before buying, Bored Panda reports.

Man Sends Pics Of Himself In A Bathing Suit To A Creep Who Wanted The Exact Same Pictures But With His Sister In Them #trollhttps://t.co/AI9kVEkBxO

She immediately decided it was best to ignore the comment altogether. But, her brother Kade wouldn't let it go. Instead, he came up with a brilliant idea. He decided to wear the bathing suit, struck a few amazing poses, and Wright went on to post them on the comments as a response to the creep. In doing so, the brother didn't just help get back at the weirdo but also taught a fitting lesson. This unique exchange caught on and quickly went viral on the internet and before Wright knew it, it received over 25K likes and shares while thousands of people shared their thoughts on the brother's ingenious chops. In conversation with the outlet, Wright shared that she and her brother had a close-knit relationship and when she read the response to the sale ad, she began venting to him. And, he immediately came up with a brilliant idea. "I thought it was a great idea and would be really funny," she said. "My brother and I are very close. Always have been. We get in some nasty fights, but if someone else messes with one of us it’s over. We always have each other’s back."

Wright continued that she has dealt with creepy people several times when selling stuff on Facebook Marketplace. "Creepy men like to take advantage of young girls on there. Never send a pic of you modeling the clothes. Sometimes, men will even make fake accounts acting like women who are interested in buying your clothes and ‘want to see it on," she observed, adding that having a brother like hers is a good idea when dealing with them. "I usually just block these types of creeps, but if you have a brother like mine it might be a good idea to get him involved." As the post went viral, people started commenting on how great an idea it was while many praised Kade for stepping up to protect his family member and issuing a fitting clap-back to the pervy commenter.

"Your brother just became my hero," a user commented, followed by a series of laughing emojis. "I'm afraid he may have liked him better," another joked, " but that was brave and a great gesture." A third shared: "Your brother's bikini bod puts mine to shame." One more added: "Gotta love the protection of an older brother." In an op-ed piece on The Guardian, Talia Jane, a New York-based writer shared that women receiving inappropriate messages on social media is an endemic issue and they shouldn't feel sorry for reacting in a way they see fit. "Women have nothing to regret for responding to bad behavior by doing what they feel will best keep them safe." She continued: "Shutting down sexual harassment shouldn’t make you shake in fear or feel like your stomach just fell 10 stories. We don’t just need to be empowered, but released from the burden of protecting men’s comfort at the expense of ourselves."