The 16-year-old decided to change schools after the traumatic incident. His friends let him know that he was not alone. 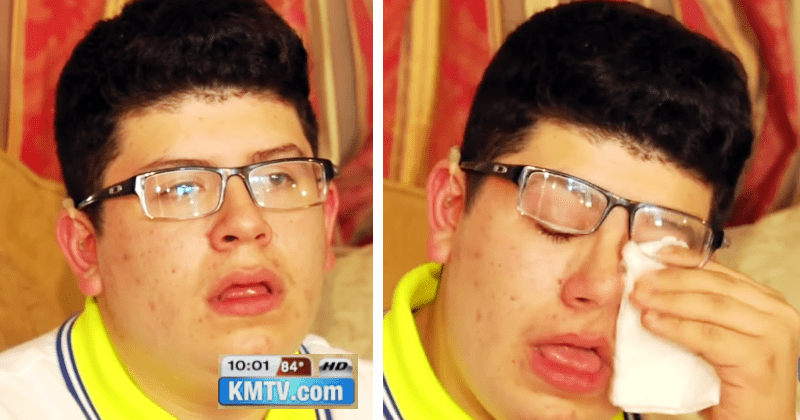 A deaf student was bullied and had his things thrown into the toilet, including his hearing aid battery, at a school in Omaha, Nebraska. Alex Hernandez, 16, was left traumatized after school bullies stuffed his backpack into a toilet at Burke High School. Hernandez's teachers, classmates, and friends wanted to show him that the bullies were outnumbered by the number of people who loved him as they raised money to replace the things that had been ruined. The incident happened at the start of school. It was during lunch period that Alex Hernandez, realized his backpack was missing. It had contained his tablet, school supplies, debit card, a battery for the cochlear implant that enables him to hear, and an English project he'd finished and was about to turn in. “Those students think it’s okay to bully a deaf student, but it’s not. It’s not okay to bully someone who is disabled, deaf, or hard of hearing,” Hernandez told KMTV. “Or anyone for that matter.”

Hernandez didn't want to go back to school after the incident. "This just got out of hand. There's too much bullying, too much drama, too much fighting; it’s just not nice," he said. Omaha Public Schools released a statement saying the incident of a disabled student being bullied was an isolated incident. They also confirmed that they had identified two boys from Burke High School students as the perpetrators after a surveillance video caught them in the act. Hernandez's mother was told that at least one of them was suspended.

"We are aware of the situation involving theft of a student’s property that occurred last week at Burke High School. This situation was an isolated incident. It involved theft of property that was later discarded, captured on photo by students, and shared on social media. The district immediately reached out to parents about this situation to share the facts and explain how we were addressing the situation," read a statement from the school, reported KETV. "OPS strives to provide a safe learning environment for all students.
Had the situation been assessed and classified as a bullying situation, we take those reports and situations very seriously as well, and address them immediately."

Burke Students: bullying is NOT okay and we need to make a change. @reganguiano has started a go fund me for Alexis. pic.twitter.com/BZNJ9ttcMj

His friends rallied to show Hernandez that the bullies were in the minority. They started a GoFundMe campaign that achieved the $800 goal in just four days. Hernandez said he was overjoyed at the response. "I wanted to thank all of my friends and those who wrote me for supporting me," said Hernandez. "I am very happy. It made me feel like I am not alone. They said they felt sorry for me and had me in their prayers. They said [they] were here supporting me, and they know how it feels like to be deaf.”

Hernandez said he wants to leave the school having suffered from years of bullying with many targeting him over his disability. “Today was my kid — tomorrow will be somebody else’s,” said his mother, reported 3 News Now. "It's not fair that the bullies think they can continue with this behavior. They need to be reminded that there are consequences to stealing and bullying." His mother told that she would support his decision to transfer out of the school. The incident happened in 2016 but is a good reminder of the kind of bullying that disabled students often face at school.