The story of Buffy Wicks went viral after she was told by the speaker of the assembly that her situation didn't warrant a proxy vote. 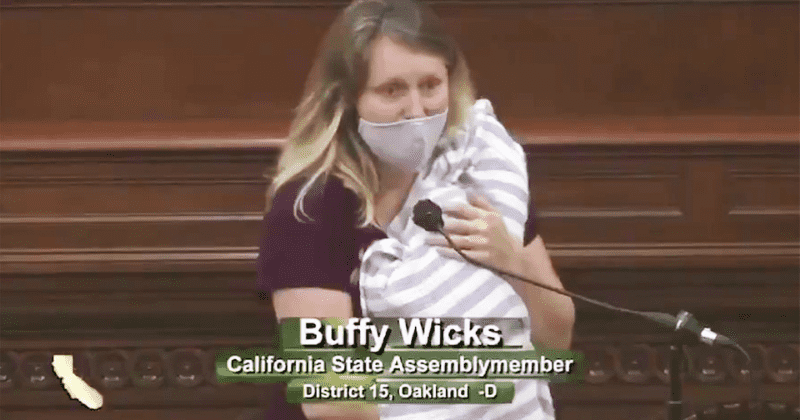 Photos of Buffy Wicks, a California politician who was forced to bring her newborn baby to the state assembly floor after being denied a proxy vote, have now gone viral on the internet this week, with plenty commenting that the situation perfectly highlights the pressure working mothers have to endure while juggling childcare and careers in the midst of a pandemic. Wicks, who was on maternity leave after giving birth a month ago, was denied a vote-by-proxy, which pushed her to walk into the assembly with the newborn baby so that she could vast a vote on California's housing crisis, reports the New York Times.

Buffy Wicks, a California Assemblywoman from Oakland, was told that having a newborn wasn’t a good enough excuse to vote by proxy due to Covid-19 concerns.

So she drove from Oakland to Sacramento with her baby to vote on critical eviction legislation.https://t.co/kjj0Mzbikn pic.twitter.com/HjmkieVwDt

In an interview with the Guardian, Wicks said she wasn't alone in going through such a situation and that the widespread attention her issue generated would help organizations take the right steps in offering sufficient care for new parents. "Every woman has been in that situation, just maybe not on the floor of the assembly. My mask was falling as I was trying to rock my baby and say what I needed to say. Since this all went viral, I’ve had many moms reach out about having no childcare and going into the bathroom to cry because they’re so stressed," she added. "My hope is to get rid of this misogynist racist in the White House, take back the Senate and create better safety nets."

Wicks is a representative for Berkeley and Oakland in the state's general assembly, but a vote for State Bill 1120 reached the floor which she was on her maternity leave. The bill is aimed at fixing the housing problems in California, making it easier for developers to build duplexes in areas set for single-family homes. The 43-year-old was a strong supporter of the bid and so she requested to vote-by-proxy, citing her having recently given birth to her child. But her request was shot down as the California Assembly requires one to be at a "higher risk" from coronavirus to be allowed the privilege. "I asked again because my daughter doesn’t have an immune system." However, she decided to go up and vote for the cause she believed in. The speaker was concerned about whether the votes would legally qualify or not so I was left with the decision of staying home and not voting on bills that were gonna be close."

#HeroOfTheWeek is CA Assemblywoman @BuffyWicks. Apparently, the men in leadership didn’t think recently giving birth was a good enough excuse to vote-by-proxy. So, she brought her baby to the floor to cast a tie-breaking vote on expanded paid leave bill https://t.co/ZwrFyZtDqf

Commenting on the issue, Speaker Anthony Rendon told Politico that while Wicks' situation was understandable, it didn't reach the threshold to be able to warrant a proxy vote. So, seeing no other option, Wicks picked her baby up along with all medical supplies to help her during the two-hour drive and decided to sit in her office to avoid coming in contact with people before the vote. When the housing bill reached close to the deadline, she reportedly "swooped her up, put a blanket on her, and ran downstairs." Rendon later issued an apology for his role in the scenario and said: "My intention was never to be inconsiderate toward her, her role as a legislator, or her role as a mother. I failed to make sure our process took into account the unique needs of our members." Stressing on the need for better processes in place, he added: "The Assembly needs to do better."

California lawmaker Buffy Wicks brought her newborn baby to the Assembly floor after being told she couldn’t vote on a bill remotely pic.twitter.com/UrrCkZoDFH

People on social media argued that Wicks should have been allowed her proxy vote with some quoting the Centers for Disease Control and Prevention (CDC), stating that pregnancy is an immuno-compromised state when it comes to the virus. Several influential people, including Hillary Clinton, tweeted about the hardships women have to go through in order to be a mother and juggle their careers. Clinton wrote: "California Assemblymember @buffywicks was told that having recently given birth wasn’t sufficient excuse to cast a vote remotely. So she brought her newborn daughter to the floor to weigh in on an important housing bill."

It doesn't matter what party you're in. Mothers and babies should be considered sacred. The fact that Buffy Wicks went to work and still did her duty shows her dedication and integrity. This should never have happened. This is almost a crime. I consider it a sin.