An Extremely Rare, Bright-Yellow Catfish Was Recently Caught In Netherlands

Martin Glatz, who is a professional angler, noted that he had caught several catfish in his life however, this banana-colored fish has nothing on them. 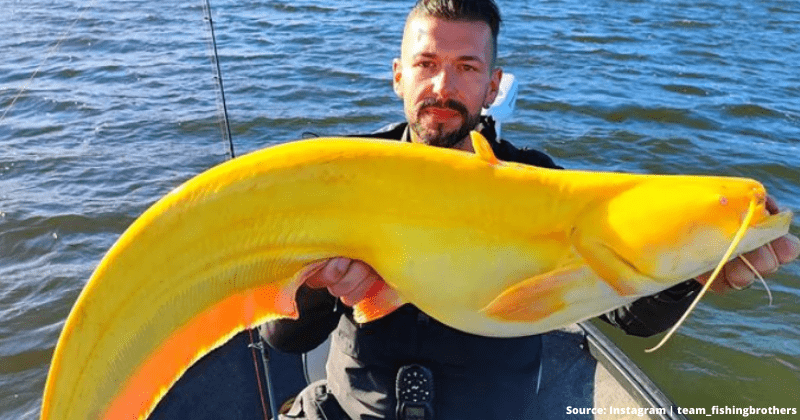 When Martin Glatz and his twin brother Oliver went out to fish on a lake recently, they were taken aback after being greeted by an unusual passerby. It was an enormous, bright-yellow catfish that suddenly flopped out of the water and ended up in their boat. Glatz, who is a professional angler in Netherlands, noted that he had caught several catfish in his life however, this banana-colored fish has nothing on them. Apparently, he even panicked a little at first. "I have never seen such a catfish before," shared Glatz in a message he sent to Live Science. "I am still overwhelmed by it."

Now the gorgeous whopper is actually a wels catfish (Silurus glanis) and, according to Field & Stream, it is a large species that is native to lakes and rivers throughout Europe. These banana-hued fishes are generally known for their enormous size and they can grow to a length of at least 9 feet (2.7 meters) long and weigh almost 300 pounds, per the National Oceanic and Atmospheric Administration (NOAA). However, they rarely have this bright color as the fish that Glatz caught. Your usual wels catfish have a dark greenish-black colored body, which is scantily covered with mottled yellow spots, explained the NOAA.

So, what caused the catfish to completely have this lemon-zesty color? Well, it's likely that the water creature has leucism, which is a rare genetic disorder that affects the pigmentation of the skin and hair by reducing it. Contrary to albinism, which is a similar genetic disorder where the skin, hair, or eyes have little or no color, leucism does not affect the animal's eyes. This is not the first time that Leucism has been observed in nature. In fact, many reptiles, mammals, birds, and fishes are affected by it which results in some unusual but eye-catchy sightings. Take the white killer whales and yellow penguins for instance.

Back in July, a whale-watching group in Japan were treated to a rare encounter- two white orcas or white killer whales. The group named Gojiraiwa Kanko Whale Watching noticed the pair while they were off the coast of on the northernmost of Japan's main islands Hokkaido. The other incident unfolded a few years ago. While you'd image a black and white-colored bird when you hear the word penguin, one of them broke the conventional appearance with its striking yellow coat. In December 2019 a wildlife photographer happened to notice the rare penguin on a remote island in South Georgia.

"[A king penguin] walked up straight to our direction in the middle of a chaos full of sea elephants and Antarctic fur seals, and thousands of other king penguins," wrote Belgium photographer Yves Adams at the time. "I'd never seen or heard of a yellow penguin before. There were 120,000 birds on that beach, and this was the only yellow one there," he told news outlets of the rare sighting. "We all went crazy when we realized. We dropped all the safety equipment and grabbed our cameras."

Now leucistic animals seem like an exciting treat to us humans but out in the wild, their bright appearance poses a huge disadvantage. The light color of their bodies attract more predators and could make them an easier target when compared to their pigmented fellow fishes. It seems like the one Glatz caught has managed to escape an early demise and angler hopes that it would live to grow even longer in size. After clicking a few pictures, he reportedly released the fish back into the water and wished that it would be a bigger surprise for another angler some day in the distant future.