trending celebrity people lifestyle news animals
Celine Dion Shares A Sweet Picture With Her Three Sons, Says "It's A Privilege" To Be A Mom

Celine Dion Shares A Sweet Picture With Her Three Sons, Says "It's A Privilege" To Be A Mom

The Canadian singer shared the photo on Mother's Day, which has received over 321,000 likes and thousands of endearing messages on Instagram 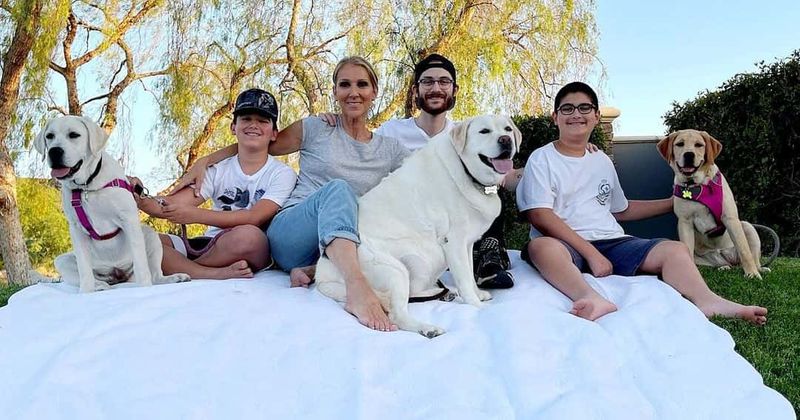 Celine Dion hasn't been in the news for a while now. But, on Mother's Day, the "My Heart Will Go On" hitmaker warmed millions of her fans' hearts by sharing a sweet Instagram picture featuring her three sons, René-Charles, 20, and twins Nelson and Eddy, 10, and their dogs. "Who’s having the best day today, me or the kids?” she wrote. "What a privilege it is to be a mom! Happy Mother’s Day! Enjoy every moment … Can it get any better than that? To be continued … All my love, Celine xx…" she added, including the same caption in French. In just over a day, the picture has received over 321,000 likes and thousands of endearing messages from her followers.

A sporadic poster on Instagram, the Canadian singer always rings in the festivities with pictures of her spending time with her children. Previously, Dion had shared a photo with her kids during Christmas which showed her in matching pajamas with the three sons, sitting in front of a Christmas tree. "May this holiday season bring all of you the gifts of love, peace, good health, and the promise of brighter days in the New Year ahead!" she captioned the post. Later in January, the 53-year-old honored her eldest son Rene-Charles on his birthday with a photo of the both of them in which she's cupping his cheek while he smiles looking at her. "Twenty years ago, I had the privilege to hear the word mom for the very first time," she wrote. "My dream came true, and you changed our lives forever!” Dion has always loved showing off her kids to the world.

Last October, she shared throwback pictures of her with Nelson and Eddy when they turned 10. "Nelson and Eddy, you have been bringing so much joy, love, and laughter into our lives every single day for the past 10 years,” she wrote. “You make me, your big brother, and your Dad, who is for sure watching over you, so very proud." Dion had three children with her late husband, René Angélil, who passed away in 2016 due to throat cancer. The singer honored her music-producer husband in January, marking the fifth anniversary of his passing, and wrote: "René, it's been 5 years already… There's not one day that we don't think about you," she wrote at the time, per PEOPLE. "We're reaching out to you now more than ever, to guide us, protect us, and continue to watch over us," she continued. "And we pray that you'll shine your love on the entire world, to all those at this very moment, who are facing incredibly difficult times. You are in our hearts and in our lives forever. We love you, Celine, René-Charles, Nelson, and Eddy xx..."

The ace singer has also been encouraging her eldest son in his pursuit of a career in music. When Rene-Charles launched his first hip-hop EP, Casino.5 in January, Dion was first to promote the message in a touching post. "I'm so proud of my son," she wrote at the time. "My love for him is so strong, and it touches me deeply that one of his passions is also one of mine."