Social media users lashed out at the classic holiday cartoon for being racist and even compared it to the 'Get Out' movie. 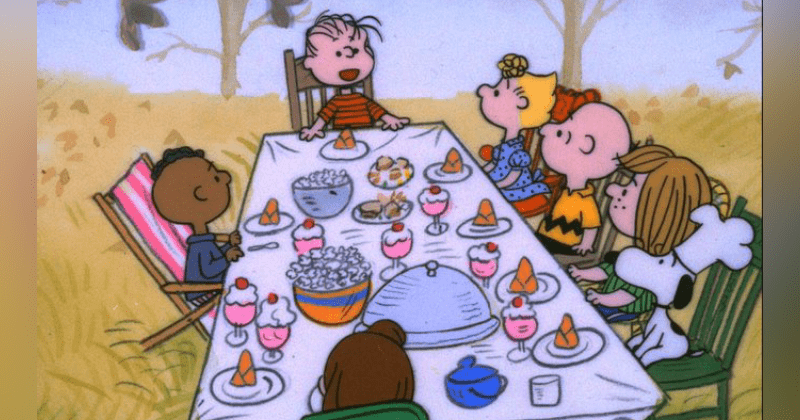 Believe it or not, even comic strips have a tendency to cause a lot of friction within and against races and communities. Remember the cartoons by the French magazine Charlie Hebdo that had later been the target of three different terrorist attacks!? Yes, that's just an example of how provocative a comic can be, even when it isn't trying to. The popular holiday cartoon Charlie Brown Thanksgiving has been slammed and labeled racist by many internet viewers recently. The classic Peanuts holiday cartoon is, by now, an American Thanksgiving tradition. The characters in the strip hold a special place in American hearts, but several social media users thought that the cartoon might be a bit problematic. A key tenet of Thanksgiving has been sharing dinner with your loved ones, and it's during this dinner in the cartoon that viewers spotted the problematic visual where the only colored character is found sitting all by himself and on a chair different from that of the others.

Read The Comments! Are They Really That Stupid?🤔🤔 Yes They Are!#BluestarZone#LiberalismIsAMentalDisorder#Racismhttps://t.co/7HZfYPab7u pic.twitter.com/M35fKhjp83

The holiday special depicted Peppermint Patty arranging a little impromptu holiday meal where many of Charlie Brown's friends head to Sally's house to attend it. This is actually a separate thanksgiving dinner in addition to that of the grandmother's feast organized for them. After Charlie is convinced of holding 2 thanksgiving dinners, Woodstock and Snoopy do the cooking for the meal — buttered toast, pretzel sticks, popcorn, jelly beans, and an ice cream sundae. As they all sit at the table, the only African-American friend of the group, Franklin, can be found sitting on the left side all by himself, with the others forming groups on the other side of the table. Social media users also noted that Franklin was the only one who sat on a lawn chair while all the other characters sat on dining chairs. "How come Franklin, Charlie Brown's only black friend, sits alone on the other side of the table? And in a lawn chair," asked one Twitter user.

We're so thankful for family time! A Charlie Brown Thanksgiving is on tonight at 8|7c on ABC! pic.twitter.com/5C7fcld5Ys

Considering the issue in isolation, it does tend to be problematic, but it remains to be seen if racism was explicitly meant to be portrayed across the holiday special. Many slammed the holiday special over the scene with one user comparing it to Jordan Peele's classic Get Out: "Let’s talk about Franklin. The dude gets invited to Charlie Brown’s by Peppermint Patty. Then he finds out that it wasn’t a real invite, a dog is cooking the food and he’s gotta sit by himself at dinner. That’s Get Out. #CharlieBrownThanksgiving." Another user wrote: "Am I woke now, why is Franklin in Charlie Brown Thanksgiving sitting all by himself at the table. Man. Things that I did not notice as a child."

Meanwhile, Charles M. Schulz, the creator of the comic strip is actually an active advocate for equality. So there is no doubt that he would have been disappointed to see his lifetime's artistic work reflecting any racist theme in the cartoon version. Despite some resistance, Schulz was determined on adding Franklin, a Black character, into the comic series in 1968, right after Martin Luther King Jr. was assassinated. Harriet Glickman, a White 42-year-old suburban Los Angeles school teacher, wrote to Schulz requesting him to include a nonwhite child into the series and she thought it would make a world of difference to race relations in the US, according to The Independent. The cartoon's first airing was on November 20, 1973, on CBS and has since become a staple of the holiday season., The holiday special cartoon moved from CBS to ABC in 2001 but has always been aired on TV. The cartoon would also go on to be a full-fledged movie with Snoopy and Charlie Brown: The Peanuts Movie in 2015.