The couple from Coventry marry after spending three months away from each other during the lockdown. 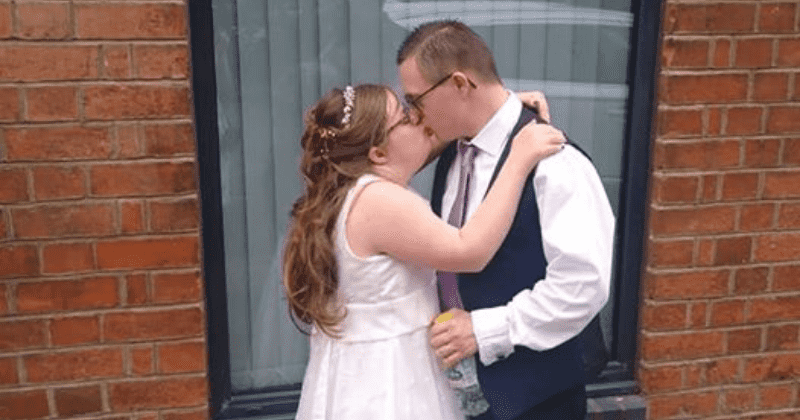 Millions of couples are taking the plunge in spite of the uncertainty caused by the pandemic. The latest ones to tie the knot are a couple with Down's Syndrome under the new safety and social distancing guidelines that were enforced, three months on from the onset of the virus. James Carter, 26, and Heidi Crowter, 25, finally had their wedding ceremony in a socially-distanced setting at Hillfields Church in Coventry, the UK, after British Prime Minister Boris Johnson allowed for weddings to return, reports, Mirror. The wedding, which was live-streamed on YouTube, was attended by 30 guests who were told to follow the social distancing rules.

Things weren't all rosy for the couple, however, as they were forced to remain in isolation for three months from each other as the pandemic forced the UK into a lengthy lockdown with Carter and Crowter spending times in their respective homes in Weymouth and Coventry. However, as the PM's announcement arrived about weddings being allowed to take place, the couple reunited and planned to marry on the same day. The couple was ecstatic about their wedding day, with Crowter even dubbing it the "greatest day of her life." Speaking to the Mirror, she said, "It wasn't the wedding we planned, but it was the greatest day of my life. When I walked into the church, I was so emotional and excited. I nearly started crying because James looked so handsome in his suit. I had dreamed of that moment since I was born."

Although the couple was allowed to marry on their original wedding date, they were forced to cut their 220-member guest list to just 30 and were even forced to scrap singing the hymns from the ceremony. In spite of the compromises, the newlyweds have no complaints as it allows them to be with each other forever. Carter, who now resides in Coventry to be with his wife, was also "excited" as he watched his soon-to-be-wife walk down the aisle. Speaking about his feelings, he said, "I was so excited waiting for Heidi. Watching her walk down the aisle was the highlight of the day, she looked so amazing." The couple crossed paths for the first time two years ago and plan to hold a massive gathering once the dust settles.

The post-lockdown rules they had to follow were pretty stringent too. As per the guidelines, fathers aren't allowed to walk their daughter's arm-in-arm down the aisle, and couples are required to wash their hands before and after exchanging rings. Coming to the guests, members of different households must maintain social distancing from other households with receptions to be held indoors and limited to only two households or up to 6 people from different households. The total number of people allowed into the ceremony is 30 people which would include the couple, officiants and guests, witnesses, and staff not employed by the venue. Other rules include restrictions on the consumption of food or drink unless for the explicit purpose of 'solemnization' and speech should 'not be in a raised voice.'

Crowter, an activist who regularly runs campaigns to demand legal amendments, had presented a petition earlier in the year where 18,000 people presented a petition to the PM's office urging MPs to not pass a bill endorsing regulations that allow the abortion of babies with non-fatal disabilities until the point of birth in Northern Ireland. According to Daily Mail, she had addressed the press in Downing Street last month and said: "I'm asking them (MPs) to respect the vote of Northern Ireland and make sure that it stands, and to allow equality in the womb for every baby.  I want this to happen because I'm someone who has Down's Syndrome and I feel that the law makes me upset, it makes me feel like I'm better off dead. I think it sends a really negative message. And in the words of a classic song, you are amazing just the way you are."

If you were on our page yesterday, you can’t have failed to notice that Heidi Crowter married James Carter, in a much anticipated ceremony!

Heidi wrote for our blog a few months ago, so it seems fitting to share it again today. https://t.co/9GBU16f65s