The 39-year-old father-of-three went on to assure the young Animal Planet star that, "He'd [Steve Irwin] be very proud of you Robert. And what you continued." 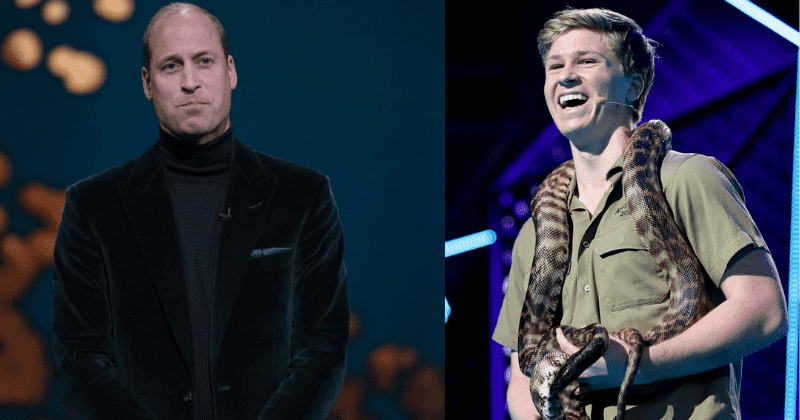 While interviewing Prince William for his upcoming Earthshot Prize, Robert Irwin became a recipient of high praise. "Honestly, I was a big fan of your dad [Steve Irwin] and I am so sorry," said the Duke of Cambridge according to PEOPLE. "It's no surprise that you're a fan of crocodiles as well. The family trait has continued into the next generation I am sure." The 39-year-old father-of-three went on to assure the young Animal Planet star that, "He'd [Steve Irwin] be very proud of you Robert. And what you continued. Your passion is only second to his."

In the due course of their conversation, Robert — who is an Earthshot advocate himself — asked Prince Willaim about the inspiration behind him starting the non-profit. He shared that it was designed to encourage change and help repair our planet over the course of 10 years. The non-profit hosted its first awards ceremony in London on Sunday, October 17. "I felt that a bit of optimism and hope is what we needed," he shared of the global environmental prize. "Showing people that there are solutions. That there is a way forward what was going to be needed, and so that's how the Earthshot Prize sort of spun out from there," he continued.

The Nobel-like award was founded by Prince Williams and renowned naturalist David Attenborough, according to CNN. Five inaugural winners (of 15 finalists) were presented with £1 million ($1.3 million) grant for their efforts and a promise to provide "professional and technical support" to expand their innovations. As for the award ceremony itself, it was one of the most sustainable functions where Shawn Mendes, Ed Sheeran, and Coldplay's performance was powered by 60 cyclists. This conservative effort is exactly what the Irwin family, including Terri and Bindi, have dedicated their lives to.

Having someone as young as Robert propagating the idea of conservation is extremely inspiring. Expressing his hope for the upcoming generation the 17-year-old said, "I'm really glad that I get to hopefully inspire my generation and my fellow younger Australians to ignite and start that spark of passion." The family continues Steve Irwin's legacy not only through the Australian Zoo but also their foundations, which include Wildlife Warriors. The teen wildlife photographer was just 2 when he lost his father in 2006 after a stingray barb pierced his chest while filming a wildlife documentary on the Great Barrier Reef.

But this hasn't dissuaded him from continuing his father's conservation efforts. He and his family actively helped save over 90,000 animals injured in the Australian bushfire crisis through their zoo, we reported. Earlier last year he took to Instagram and said, "Thankfully, our 451,000 acres of protected wildlife habitat are safe from the bushfires at the moment and are acting as refuges for thousands of endemic species. But sadly, in other areas of Australia, millions of acres have been destroyed. My heart goes out all who have been affected by this crisis, and the firefighters who are working tirelessly to protect our country."

Not only is he walking in his father's footsteps, but is also a spitting image of the crocodile hunter. Over the years he has uploaded many pictures mirroring iconic moments of Steve. "Dad and me feeding Murray... same place, same croc - two photos 15 years apart," he wrote posted a side-by-side picture of himself and his dad feeding a crocodile. In yet post, he shared childhood images and revealed that both of them were taken when they were of the same age. "The first time I saw it, I actually thought it was a photo of me... It really makes me think about what’s ahead in life and all of the adventures yet to come. I look forward to following in Dad’s footsteps and carrying on his mission and legacy," he wrote.