While some people commented that they could relate to him, others said they only hope that the daughter just doesn't see this video when shes older. 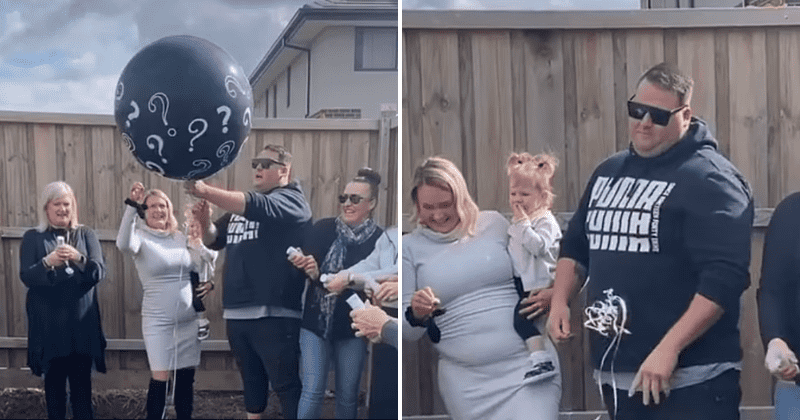 Gender reveal parties have become a big deal all over the world where people get to know the gender of their child before they're born. It's supposed to be a joyous moment, but for this Aussie father, it was a rather disappointing experience. According to Daily Mail, the gender reveal party was shared via TikTok, and the man —with his partner and their firstborn beside him— popped a black balloon which went on to reveal smaller, pink balloons.  The father, who is wearing a black hooded sweatshirt and tight jeans, appears visibly annoyed at the outcome, reports Newsweek.

Immediately, he throws the balloon onto the floor and drops a cuss word while onlookers burst out in laughter. The video was posted by TikTok user matthb92, alongside the caption: "#genderrevealworld #babygirl." This could be because he was expecting a son after having a daughter first, and people who saw the video were divided over his reaction to it. "His reaction is priceless," one wrote. "hahaha I feel ya man I had 1 boy and 4 girls," another shared. "That will be cool when his kid sees this party video in a few years," another wrote sarcastically. "Be thankful you can have kids," added a third. Another posted: "Hope his new daughter can see the loving wanted reaction when they are older."

This is not the first time something like this has happened. Recently, a woman recently revealed on Reddit that her baby's gender reveal was anything but a happy and loving moment for her and her husband. His reaction following the disclosure was so unexpected that they are now having a major disillusionment about their relationship, EssentialBaby reported. The issues began when the couple went to the doctor to find out their child's gender. The woman explained that she and her husband had been together since college and are now 28 and 33, getting ready to start their family.

As things were looking to be well set for them to find real happiness with their child's birth, the doctor revealed that they were having a girl. Surprisingly, the husband did not react to the news as she expected. "When the doctor told us we were having a girl I could see her jaw quite literally drop at the expression on my husband's face," the woman shared. Unfortunately, it wasn't in an "Omg, I am so happy" kind of way. It was more like an "Omg, this is the worst" sort of reaction that is easily spotted by people close to you. "He dropped the papers he was holding and walked out," the mom-to-be wrote.

Then, it got even worse as the woman said that her husband wasn't just a little upset, but he actually refused to speak to her for the rest of the day. "At dinner, I finally say to him that if he was only planning on being a good father to a boy he should let me know now," the Redditor recalled. Joining them at the table was also his younger sister who he introduced to his wife as if they hadn't ever met before. "That right there, in case you've forgotten, is a girl," he allegedly told his wife. "Don't presume to lecture me when I'm the only one of us who has ever raised a girl. I know what they are about.” He apologized soon after and said he was just mad that I challenged him," the wife added. You can read more about it here.