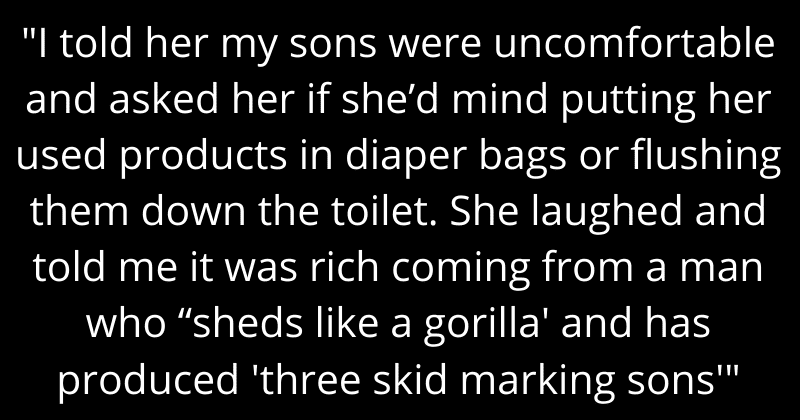 Men being oblivious about menstruation in the age of the internet where information about everything is available for free is still surprising. When this stepfather posted on the AITA subreddit about telling his stepdaughter to stop using period products in the bathroom she shared with her teenage stepbrothers, that particular fact really stood out. He claimed that his sons were uncomfortable seeing their sister's sanitary products in the common dustbin.

I have been living with my new wife and stepdaughter for about 6 months now. She’s 19, almost 20, and I have three sons aged 18, 16, and 15. She’s a really good kid and she’s a good influence on my sons, I really enjoy having her around. My wife and her daughter moved into my house and sold theirs. My stepdaughter's father isn’t present in her life, nor is my sons’ mother. All four children share a bathroom, he explained. My sons have never lived for a long period of time with a woman, nor have any of them had long term girlfriends. They had short visitation periods when they were younger but never longer than an hour, so living with two women has been unusual for them.

When his eldest son told him that his stepsister disposed of her used sanitary products without covering it in toilet roll or sandwich bags it made him uncomfortable, the father agreed that his teenage sons did not have to see their stepsister's period products on full display. He brought it up with his daughter one day and suggested to her "if she’d mind putting her used products in diaper bags or flushing them down the toilet." The daughter laughed and said, "it was rich coming from a man who 'sheds like a gorilla' and has produced 'three skid marking sons.' He went on to write, I’ve been nothing but nice to the girl and it’s hardly a comparison. My sons shouldn’t be subjected to her unhygienic products if it makes them uncomfortable.

The stepdaughter then took the time to tell her stepfather about how tampons can’t be flushed and that it’s bad for the environment. To which he replied that it was "just an excuse". He proceeded to call her a scruff and told her that "this was my house and that what I say goes." When he brought it up with his wife, she obviously sided with her daughter. Both of them have told me to stop being so silly but I don’t see how I’m being unreasonable when it makes my sons uncomfortable, he wrote. Redditors had some words of advice for the "man of the house" after they had decided that he was indeed the jerk in this situation.

ManwithoutaplanTO had the top comment and rightly said, YTA. Sorry but what? I'm a guy and realize this is ridiculous. You need to help yourself and your sons become better men and accept that it's a natural process. Are you uncomfortable with your wife's use of the same? I assume not so teach your sons to be better. NewBlackberry2 stated, YTA. Firstly you cannot flush a tampon. You will clog the toilet and hello plumber bills. Secondly, as long as she wraps it in toilet paper said "skid marking sons" can suck it up. Strikingfirefly wrote, YTA No, it is not reasonable to be disturbed by period products that are in a trash can. It's not like she's finger painting on the wall with her period blood. She's just disposing of her menstrual products. Your sons need to grow up.

The stepdad went on to update his original post with a great turn around. Not even two hours after I posted this, my wife and stepdaughter gathered my sons and I and gave us a full intensive “periods for pricks” course, Powerpoint and all. It was a hoot, they made an interactive quiz and everything. My sons and I learned a lot and apologized to my stepdaughter. Thank you for your input, he wrote like a great sport.