Trenton Brown started singing 'The Star-Spangled Banner' after the music system failed and the video has gone viral. 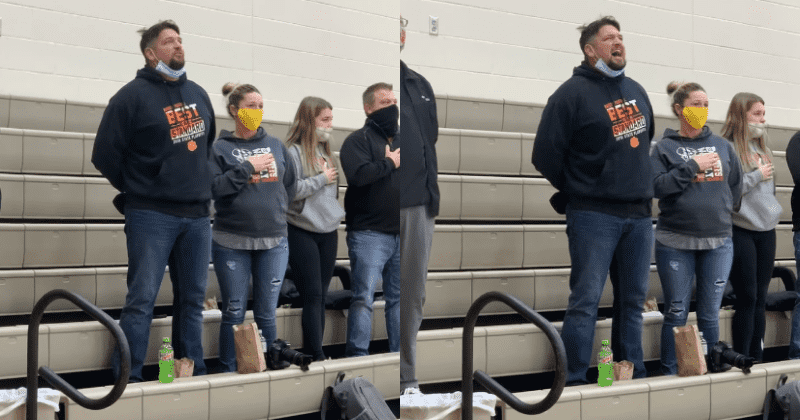 No matter how prepared you are it's always unnerving to sing the national anthem, especially in front of a live audience. But if you succeed in hitting the right notes that too at the drop of a hat, it is truly impressive. People attending a high school basketball game on Friday in Ohio got the opportunity to witness just that. The match was between the Waverly High Tigers and the Portsmouth West High Senators in West Portsmouth, Ohio. However, just before the match, a faulty sound system led to an experience that won't be forgotten any time soon.

Thank you for setting a great example for everyone in attendance. We need more Patriots like you.

Players from both teams had lined up as the game announcer instructed everyone in the audience to stand and get ready for the national anthem. Just as the anthem was supposed to begin, something went wrong with the sound system. The organizers struggled to fix the technical issue that prevented the sound system from playing the anthem. After a few minutes, the silence was broken by a man's voice. Trenton Brown, one of the parents of a Waverly student, was singing "The Star-Spangled Banner" and boy was it beautiful!

It took some encouragement from his wife to get him to sing a mesmerizing rendition of the anthem. Recalling the incident, Brown told CNN, "I looked over at the announcer and the music didn't play and didn't play and I looked over and he was getting a little frustrated. My wife gave me a little nudge and said 'Sing' and I said, 'All right.'" While Brown says he has been singing and playing music almost all his life, he has never performed the national anthem solo. "There was a lot of awkward silence ... and then I started singing and that was it," he continued.

WOW: When the sound system failed to play the Star-Spangled Banner at a game between Waverly and Portsmouth West, Trenton Brown stepped up and saved the day. Another parent said his performance brought people to tears. https://t.co/adkAoHyc9Z #10TV

After completing the anthem, Brown remembers sitting down and eating his popcorn and enjoying his Mountain Dew. The spontaneous musical moment was captured by another parent, Johnny Futhey, whose son is also in the Waverly High School basketball team. Just Wow! Audio wouldn’t work to play the National Anthem at tonight’s Waverly-Portsmouth West game. It got quiet and a little awkward then out of nowhere Ezekiel Brown’s dad Trenton steps up big time and sings with no mic, no music, just talent! Wow someone needs to sign this guy! read the caption of the video which was shared on Facebook by Futhey and it quickly became viral. "He brought about everyone in the gym to tears when he saved the day by standing up in the crowd and singing the anthem," he expressed.

Although it was not audible on the video, Futhey revealed that the crowd had joined in as Brown began singing, making for an unforgettable, beautiful moment. When he first posted the clip on social media, he did not expect it to be viewed a million times. "When I originally posted I thought it would get some interest but didn't realize it would be like a million views!" he said. Explaining the reason behind sharing the video, Futhey continued, "I posted it because I was like, the world needs to see this." Facebook users were quite amazed by the video and user Raquel Arocho wrote: So so so AMAZING! THANKS FOR SHARING. I JUST WATCHED IT 3X. BEAUTIFUL. Another Mandy Koester suggested: I think Trenton should sing our National Anthem at the Super Bowl or any other major event!!! His performance is captivating!!!