The rest of the 29 teams have been playing the anthem via recordings. Mavericks have hosted 13 games without the anthem this year. 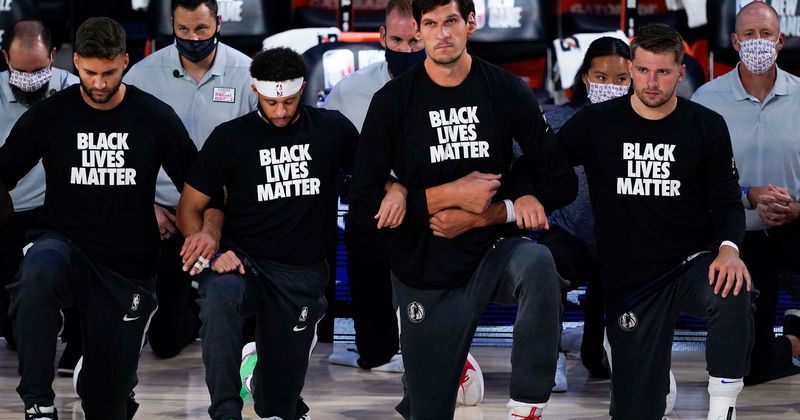 The Dallas Mavericks has become the first NBA team to stop playing the national anthem before games this season. They haven't played the national anthem prior to any of their home games this year and may well be the first North American professional sports to do so, reported CBS Sports. The Mavericks confirmed to The Athletic's Tim Cato that the team had stopped playing the anthem prior to games. The team has so far hosted 13 games including a pre-season game. There was no communication on the matter and many found out only when the games began. An NBA spokesperson confirmed that teams were "permitted to run their pregame operations as they see fit" given the unique conditions under which the league was operating. The league has permitted teams the option of not playing the national team. The other 29 teams in the NBA have played the national anthem through recordings, as opposed to having a singer in the building.

And I see that Naomi Osaka has shut down tennis.

The League rules make it mandatory for players to stand for the national anthem but they have not been enforced strictly with many players protesting racial injustice and police brutality in recent years. After the lockdown when the games resumed, all players in the Orlando bubble knelt for the anthem. This was during the time Black Lives Matter protests were raging across the country in the wake of the killings of George Floyd, Breonna Taylor, and others. Mavericks owner Mark Cuban supported the decision of the team at the time. The league also permitted players to wear "Black Lives Matters" shirts during warm-ups.

It remains to be seen if Mavericks' decision to not play the anthem before games is a temporary situation, or if it will continue in the long term. Mark Cuban hinted it could be indefinitely as he confirmed on Tuesday that the franchise would no longer play the national anthem prior to their NBA home games. Cuban also confirmed that he had consulted with NBA commissioner Adam Silver prior to taking the decision, reported Newsweek. "I recognize that this is a very emotional issue on both sides of the equation in America right now, and I think it calls for real engagement rather than rule enforcement," said Silver, in December.

Mark Cuban also added that players who chose to kneel weren't in any way disrespecting the national anthem or the flag. "Whether it's holding their arm up in the air, whether it's taking a knee, whatever it is, I don't think this is an issue of respect or disrespect to the flag or to the anthem or to our country," said Cuban. "I think this is more a reflection of our players' commitment to this country and the fact that it's so important to them that they're willing to say what's in their heart and do what they think is right.

This isn't new for the WNBA:

WNBA players have been very vocal in their call for racial and social justice. During the BLM protests last year, two WNBA teams walked off the court prior to the national anthem as a show of support to the Movement. The Seattle Storm and New York Liberty were the two teams that walked back to their respective locker rooms ahead of the anthem as they prepared for the league’s opening day game. The players were also wearing T-shirts showing the message "Black Lives Matter" on one side and "Say Her Name" on the other, to acknowledge Black women victims who don't get the same media coverage as male victims, reported Huffington Post.

I commend the players on the @Bucks for standing up for what they believe in, coaches like @DocRivers, and the @NBA and @WNBA for setting an example. It’s going to take all our institutions to stand up for our values. pic.twitter.com/rUGETgAt7P

Obama also voiced his support for NBA players who went on a strike to protest the police shooting of Jacob Blake, a 29-year-old unarmed Black man, as he entered his SUV in Kenosha, Wisconsin, in 2020. Obama said it will take "all our institutions" to make changes to the system. "I commend the players on the Bucks for standing up for what they believe in," tweeted Obama on Thursday. "It’s going to take all our institutions to stand up for our values."