trending celebrity people lifestyle news animals
Mom-Of-Two Becomes A Doctor At 50, Proves It's Never Too Late To Go After Your Dreams

Mom-Of-Two Becomes A Doctor At 50, Proves It's Never Too Late To Go After Your Dreams

The single mother of two took six-and-a-half years to complete a chiropractic degree while putting her two kids in college. 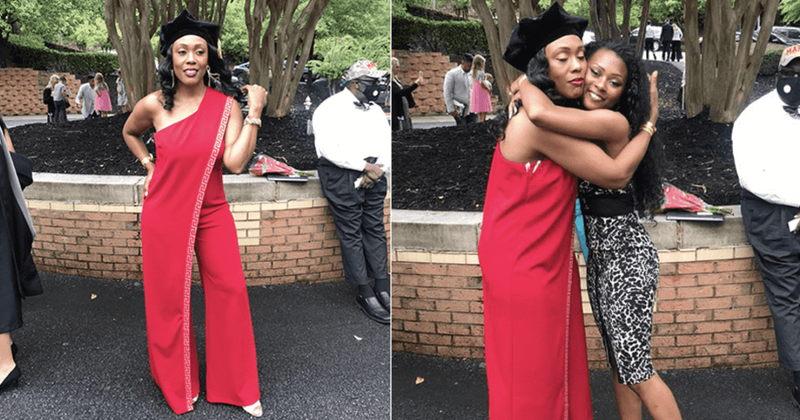 It's never too late to achieve one's dream. This single mother of two, who got a Doctor's degree at age 50, is a perfect example. The woman's daughter, Nya Syndab tweeted number of pictures of herself and her mother, congratulating her on her graduation. Syndab's mother got quite the attention with the post going viral and being shared thousands of times. Many congratulated her mother while also commenting about being inspired and motivated by her achievement. Syndab shared her mother's story in a series of tweets. "My mom became a doctor at 50!" wrote Syndab with the picture, while adding, "Dreams always come true. Congratulations, beautiful!"

Your mom deserves all the praise and accolades in the world for not only raising 2 kids on her own, putting herself thru college to a doctorate and lastly for looking fab at 50!
Long life & God's blessings shower her for many years to come.

In subsequent tweets, she called her mother "truly amazing" and "my fave." With a lot of interest in her mother's achievement, Syndab decided to share what her mother had been through to get her degree in subsequent tweets. Syndab highlighted that her mom "quit her job as a high school teacher to move to Atlanta to complete her doctorate." Not only that, but she put Syndab through Spelman College, also in Atlanta, Georgia. She also got Syndab's brother started at Morehouse College, also in the same city. So in a way, all of them were studying at the same time. But the struggle was immense, since juggling studying and bringing up children was incredibly challenging. It took her mother "6 1/2 years to complete her Doctor of Chiropractic degree while raising us."

Your mom is an amazing role model! Thank you for sharing her story and Congratulations to her!

Since the story was shared on September 26, the first post has been retweeted over 23,500 times, quoted 1,700 times, and liked nearly 300,000 times as of Tuesday. Subsequent tweets were also quite popular and generated thousands of reactions. Many, like Twitter user Sway wrote about their situations, while also claiming to have been greatly motivated by Syndab's post: As a 22 year old college drop out who feels like his life is shit this at least gives me a little motivation and realization that this is not the end and I got time to rebuild myself. Syndab replied to this tweet and wrote: It’s never the end. It took me 6 1/2 to finish undergrad and I finished this year. You’re on the right track..don’t you worry about a thing! It was heartening to see Syndab replying with positivity in this way to many reactions on her post. Like mother like daughter!

I always assumed Med School was out of the picture because I'm not 25 anymore.

Idk about actually trying it, but either way this is inspirational

Another user reacted to the post and wrote: I’m 40 now and this gives me hope. I wanna get my masters or apply to Law school but I feel I’m too old.  Once again, Syndab replied with encouragement: No! You’ve gotta do it. You have experience which will make you an even better lawyer/ masters student. You’ve got this! Syndab later posted a screenshot of a message for those who "feel like they are too old to pursue medicine (or any other goal)." The message read: I would say to you that because you have a passion/ a desire to become a doctor, it was meant for you. Whenever we have a desire for something, it's the universe and our intuition telling us that that's the path for you. No matter how much you feel like you're off track from your goal, our life has a funny way of bringing us back to where we wanted to be the whole time.