Daughter Signs For Deaf Dad At Rock Concert: "This is the coolest thing on the internet right now!"

Karri, 19, and her father Darrin, 53, attended a Three Days Grace concert where the band themselves shared the viral video. 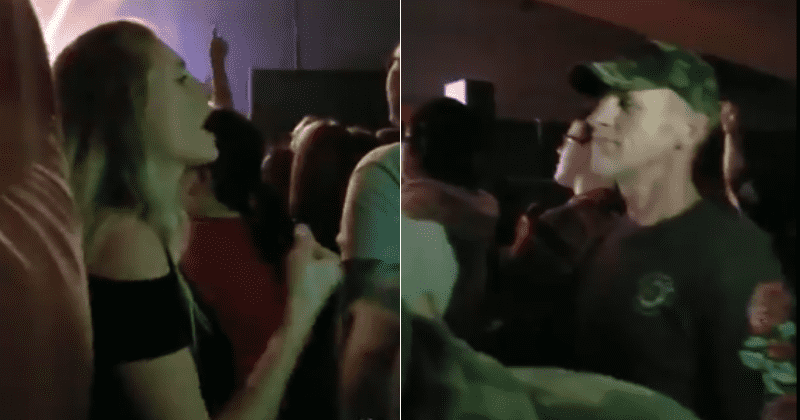 A super sweet moment was caught on camera where a teenage girl was signing the lyrics of a song to her deaf father at a rock concert. The video was captured by a woman named Jules Maria who pointed out that the moment shared between father and daughter at the Three Days Grace concert was 'absolutely mesmerizing'. She posted it on Facebook, writing: At last night's concert, we witnessed something absolutely beautiful. Keep In mind this was a rock concert (Three Days Grace in Edmonton). We saw this girl and a man who seemed to require a lot of dancing room, irritating at first until we realized what was happening. Her father is deaf, she was signing the lyrics to him. We couldn't care less about what was happening on stage, watching them was absolutely mesmerizing. They were both very sweet and her father was very proud of his daughter. So here's one of the songs, sorry just a crappy snippet of what happened.

For so many reasons... this is truly everything about music and all having nothing to do with sound.

The concert took place around two years ago in Canada but the video continues to be adored by people all over the internet even today. According to CNN, Kari Carberry was 19 at the time and her dad Darrin Carberry was 53. Darrin was born deaf but wears a hearing aid in one ear that gives him some hearing, his daughter said. Kari Carberry admitted that she noticed people recording her during the concert but was too busy enjoying the moment with her dad. "He is the one who got me listening to the band," she said. "When I saw they were going to be in Edmonton, my dad was the first person I asked to go with me."

The video of the two went so viral that even the band themselves took notice! Three Days Grace shared the video on their Facebook page, captioning it: This is the coolest thing on the internet right now!!! so sweet. The band's drummer personally reached out to Kari Carberry on Facebook to tell her how amazing the moment was, she said. "For one of them to reach out personally was really cool," she said. She's received tons of positive messages from people all over the world. "I've received so many messages from across the world of people commenting on the video," she said. "The responses have been overwhelming." As for what's next for the father-daughter duo, she said, "We are definitely will be looking for more concerts in the future." They probably include the likes of some of her favorites: Nickelback, Theory of a Deadman or Metallica. Kari also told Good Morning America, "It was our first concert together. I feel absolutely shocked and amazed at all of the views and responses we have been getting! It's an amazing feeling and we're both very happy that everyone around the world is enjoying it so much."

This is so beautiful. ❤ As someone whose grown up with deaf music lovers in my family, seeing this warms my heart. 👏😍🤘
Daughter signs for deaf dad at rock concert and doesn't miss a beathttps://t.co/HPwtSYKr0h

Fans chimed in with Amanda Colon saying: Should update it with the fact that one of the members of TDG paid for the dad to get the hearing aids he’s needed for years. Brenda Banks noted: Awww! What a wonderful daughter and father. You can see the LOVE between them! Great to behold. Belle Serra said: This gave me life and tears. What a beautiful moment captured. Bailey Ellis wrote to the band, saying: I think that dedicated fan deserves a meet and greet! Brandy Ashbey added: Absolutely LOVE this! I have goosebumps! I just wish more people would take the time to understand that music isn't only for those who can hear! We are ALL special. Much live to this young girl and her father! Rock on!!!

Here are some other responses to the rocker father and daughter's sweet moment:

That’s awesome. ASL is the beauty in language! Way to make your dad part of the experience.

This is lovely. I love how the dad throws in a little dance hahaha.

What a wonderful daughter! Wish more people could be like this. Pure love. ❤️

Great to see them enjoying a great music. Me and my daughter have gone to many shows. And hopefully many more .