De Niro accused Trump's administration of 'dancing' around President's action without prioritizing the lives of the American people. 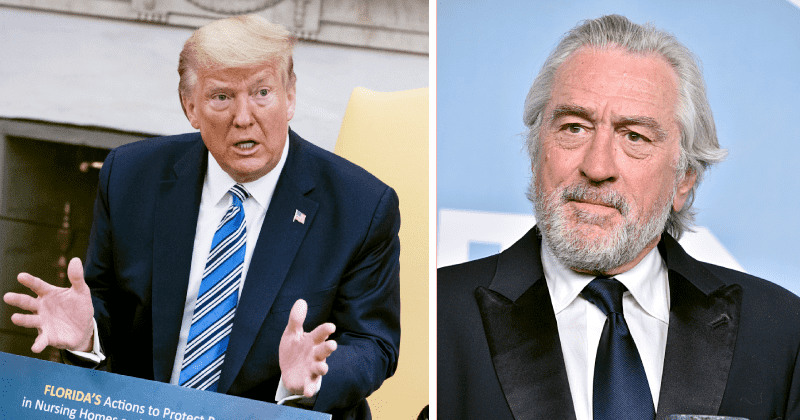 Hollywood star Robert De Niro didn't mince his words when asked about Donald Trump's handling of the Coronavirus and called the President a lunatic. De Niro said Trump is only focused on getting re-elected and 'doesn't care' how many people die from the pandemic. De Niro has without a doubt been the most vocal critic of the President in Hollywood. The Oscar-winner slammed the President during an appearance on Newsnight and described the scene in the White House as Shakespearan. "You've got a lunatic saying things that people are trying to dance around," said Trump, about the lack of resistance within his administration.

"[President Trump] doesn't even care how many people die."

Talking about Trump's handling of the health crisis, De Niro said, "It's appalling, it's appalling. He wants to be re-elected, he doesn't even care how many people die." When Newsnight host Emily Maitlis said the President's fanbase continues to back the President, De Niro said Trump didn't care about them either, reported The Daily Mail. "No, he doesn't care for those people. And the people who he pretends to care about are the people he has the most disdain for because he could care less about them. They might like to tell themselves or delude themselves, but he doesn't care about them," added the actor. America has recorded more than 85,000 deaths and 1.4 million people have contracted the virus — the highest in the world.

"Dr. Fauci, who is all fact-based, science-based, he has more credibility on this issue, according to polls than anyone in the nation." - New York Gov. Andrew Cuomo on President Trump criticizing Dr. Anthony Fauci's caution on schools reopening https://t.co/vlYDSkBwKx pic.twitter.com/09yD4BGmDF

The 76-year-old actor is self-isolating in New York and said the pandemic feels like a fictional movie. "It's been very strange because New York is kind of like a ghost town, it's surreal and then you see other parts of the world, other great big cities of the world, are also in the same situation. It's interesting, it's kind of like a science fiction movie but it's real," said the Taxi Driver actor.

President Donald Trump had been pushing for the reopening of the economy amidst the coronavirus pandemic. Despite multiple experts and scientists warning against reopening the economy, Trump wants to go ahead with his plan. Dr. Fauci warned that the pandemic could get out of hand if America reopened too soon, in his testimony to the Senate. "Look, he wants to play all sides of the equation," said Trump of Dr. Fauci's warning. The scientist had also warned against opening schools. "We just have to see on a step-by-step basis as we get into the period of time with the fall, about reopening the schools, exactly where we will be in the dynamics of the outbreak," said Fauci. "I was surprised by his answer actually, because, you know, it's just to me - it's not an acceptable answer, especially when it comes to schools," said the president, who has zero medical experience and little faith in science.

WATCH: Three years ago, Dr. Anthony Fauci warned the Trump administration about the likelihood of an upcoming pandemic pic.twitter.com/LiJfzvsHLE

De Niro has been very vocal when it comes to criticizing the President.  During the Tony Awards, Robert De Niro had gone on stage and said, "I'm going to say one thing. Fuck Trump." The crowd broke into applause and De Niro then added," It's no longer "Down with Trump", it's "Fuck Trump". The actor then claimed it was imperative that we stop Trump from carrying on. "We are a moment in our country where this guy is like a gangster. We're in a terrible situation and he keeps going on and on without being stopped."

The actor also warned that Trump wouldn't accept the 2020 results if he lost the elections. "He will say it's rigged or this or that. The day after he was elected, I said, well, give him a chance. You never know. You will see it. But he is the — he's worse than I ever could have imagined," said De Niro. The actor says his hatred for Trump also comes from a personal point of view. Trump is the father of six mixed-race children. “Yeah, I worry, and one of my kids is gay, and he worries about being treated a certain way. We talk about it,” said the Raging Bull actor.