The newly released pictures hint at a one-of-a-kind immersive experience into the Star Wars lore. 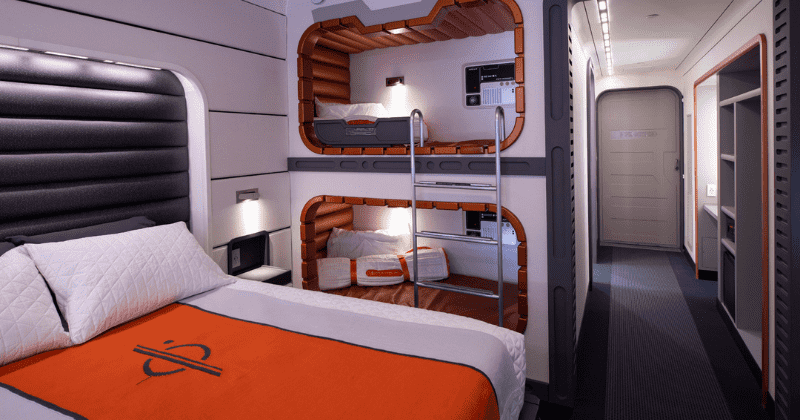 Star Wars fans will forever go down as the most loyal and dedicated fans in the world of cinema - a fact Disney is well aware of. And so, the entertainment company is bringing them a step closer to exploring their space adventure dreams on the new Galactic Starcruiser Resort, which is added to the lineup at Walt Disney World Resort in Florida. The news was announced by Disney at the IAAPA Expo: Virtual Education Conference where they shared updates on some of the highly anticipated ride openings and hotels, reports Travel+Leisure.

I love it! Looks absolutely fantastic! Can't wait to go!

The newly released pictures hint at offering a one-of-a-kind immersive experience into the Star Wars lore. Guests planning to stay there can expect a cruise-like experience where they will arrive and depart at the Starcruiser Terminal, and live inside the Halcyon for two days and two nights. When onboard, guests will have to get used to staying in ship-like cabins, dine indoors, and indulge in a tete-a-tete with the role-playing crew and cast members. What's also interesting is that every window in the cruiser will offer constantly changing views of the galaxy creating a feel as though the ship is progressing through the cosmos at the speed of light. Already a frontrunner in theme park experiences, this latest project will catapult Disney to a whole new level with the use of simulation technology.

Teasing us on what to expect on the ride in a Disney Parks blog, the company said: "You will be invited to enter a Launch Pod for transport into space. Through windows above, you’ll see yourself leave the real world behind as you jump to hyperspace and draw closer and closer to the Halcyon." Once docked at the Halcyon, the pod's airlock opens with a whooshing noise to then lead guests into the ship's main deck atrium. Not everyone will share the same experience on the Halcyon ship, reports Forbes, and guests have the option to choose their own set of adventures depending on what they feel during their stay. "You can become the heroes of your own Star Wars story in a new type of immersive experience that only Disney could create. Guests will cruise the galaxy in style aboard the Halcyon, known for its impeccable service and exotic destinations... You’ll stay in well-appointed cabins, experience onboard dining, make a planet-side excursion to Black Spire Outpost on Batuu, and much more," the blog added.

Speaking about the ground-breaking experience the resort can offer in an earlier blog, Ann Morrow Johnson, executive producer for Walt Disney Imagineering, wrote: "Star Wars: Galactic Starcruiser is a completely new type of experience. You’re going to live onboard a star cruiser…and you can get wrapped up in the larger Star Wars story.” Even though the pandemic forced the stoppage of business for Disney parks around the world, and mainly in the United States, the reopening of the economy has enabled the company to continue on with the novel project. Add to this, the huge successes of The Mandalorian and The Rise of Skywalker have reiterated the notion that Star Wars fandom only continues to grow even after four decades since the first film of the franchise released.

Disney had announced earlier in February that the resort is set to be opened to the public in 2021 with booking expected to open around now. However, it remains to be seen how much of an effect the current situation has affected its timeline.