Dr. Alan Braid, who's been practicing for over 40 years, wrote an Op-ed for Washington Post about why abortion is a vital part of healthcare. 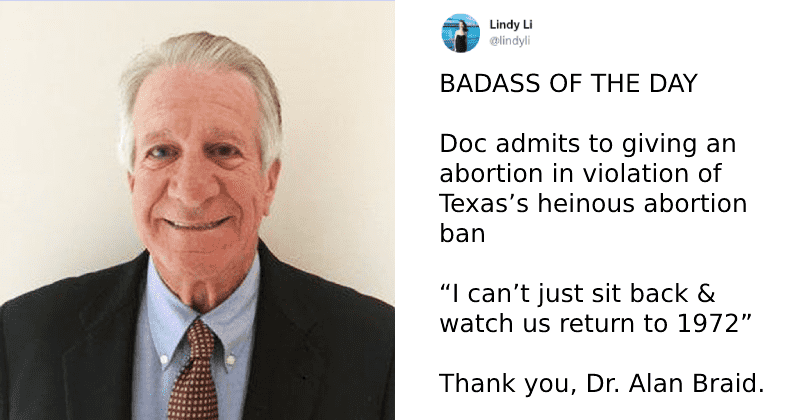 A doctor from Texas revealed he performed an abortion, violating the new state law. Now, he's being sued by two people, setting off a chain of events that could see the legality of the new law being tested. Dr. Alan Braid, who's been practicing for over 40 years, wrote an Op-ed for Washington Post about becoming the first Texas abortion provider to publicly reveal he broke the new law that went into effect on September 1. The new restrictive Texas law sees a near-total ban on abortion that virtually sidesteps Roe v Wade. The Supreme Court refused to block to law, enabling private parties to sue those who perform an abortion or those who enable people to get an abortion. "I can’t just sit back and watch us return to 1972," wrote Dr. Alan Braid in the Op-ed. The new law enables vigilantism with those who successfully sue the enabler pocketing $10,000 in damages.

The San Antonio doctor is now being sued by two people, reported NPR. Former attorneys in Arkansas and Illinois filed lawsuits against Dr. Alan Braid with the idea of testing the legality of the state's new law. "I don't want doctors out there nervous and sitting there and quaking in their boots and saying, 'I can't do this because if this thing works out, then I'm going to be bankrupt,'" said Oscar Stilley, one of the people who filed the lawsuits. Stilley described himself as a former lawyer, having lost his license. Felipe N. Gomez, of Chicago, the other person who filed a lawsuit in San Antonio wants the restrictive abortion law to be deemed unconstitutional.

"If Republicans are going to say nobody can tell you to get a shot they shouldn't tell women what to do with their bodies either," said Gomez, taking aim at Republicans who have introduced the law. "I think they should be consistent," he added. Gomez said that he would donate the money to an abortion-rights group or to the patients of the doctor he sued if he were to win in court. He called the new law a government overreach. The new law prohibits abortions once the baby's heartbeat is detected which can be as early as six weeks when many people aren't even aware they are pregnant.

BADASS OF THE DAY

Too many men & companies are sitting on the sidelines hoping we don’t notice their silence. We notice.

The US Department of Justice has already sued the state of Texas over a new law, stating it was in open defiance of the Constitution. "The act is clearly unconstitutional under long-standing Supreme Court precedent," said Attorney General Merrick Garland at a news conference, reported NPR. "Those precedents hold, in the words of Planned Parenthood v. Casey, that 'regardless of whether exceptions are made for particular circumstances, a state may not prohibit any woman from making the ultimate decision to terminate her pregnancy before viability.'" Garland further added that the law deputizes private citizens "to serve as bounty hunters authorized to recover at least $10,000 per claim from individuals who facilitate a woman's exercise of her constitutional rights."

Dr. Alan Braid said he provided an abortion to a woman who was in her first trimester on September 6 and added that he performed the actions well aware of the ramifications that could follow. "I fully understood that there could be legal consequences — but I wanted to make sure that Texas didn't get away with its bid to prevent this blatantly unconstitutional law from being tested," wrote Dr. Braid. He graduated in 1972, a year before the U.S. Supreme Court issued its Roe v. Wade ruling, which established a nationwide right to abortion at any point before a fetus can survive outside the womb, generally around 24 weeks. "I believe abortion is an essential part of health care," said Dr. Braid, as he stood his ground.