Doctors Said Rare Disease Would Kill Her By 6. She's Set To Turn 40.

Allie Williams found that music and art liberated her and went against the advice many of her loved ones to pursue her passion. 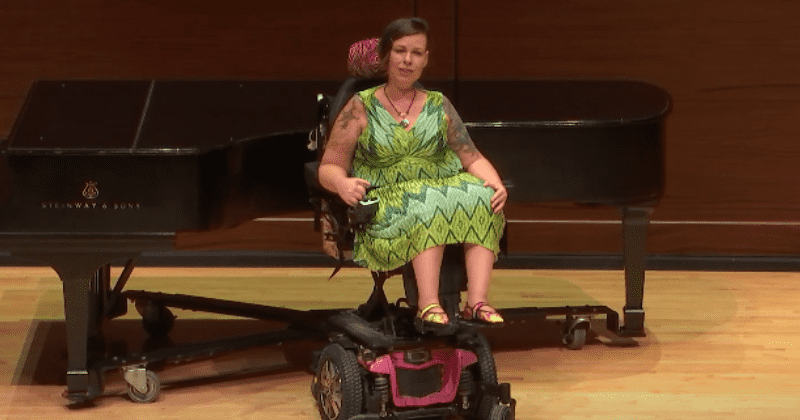 When Allie Williams was a little girl, doctors told her parents to help her enjoy life because she probably wasn't going to make it past the age of six. At 40, Allie Williams has more than defied the odds and is the first person who uses a wheelchair full-time to receive a vocal degree from Oklahoma State University’s Greenwood School of Music. For Williams, who has spinal muscular atrophy, this is the culmination of a journey she thought she'd never make. Williams' whole family was involved in music in one way or another and it was natural for her to be inclined that way as well. “My dad was a singer. My mother was in a choir. My sister played the clarinet. So, everybody in my family had some musical background,” said Williams, reported ABC5 News. She dreamt of pursuing a career as a singer and becoming a music teacher but she was warned against it because of her condition. She was old her lungs wouldn't be able to handle it. “Disorder is progressive. So, as I get older, I get weaker,” said Williams.

Spinal muscular atrophy affects movement, eating, and breathing. She was warned against pursuing a career in music. She had secured a full-ride scholarship offer to sing at Oklahoma State University but her confidence was shot, especially after the things healthcare professionals and her loved ones told her. She backed out and obtained a degree at Rogers State University. “I got scared, and I didn’t go. And I didn’t do it,” said Williams, according to Stillwater News Press. She was only 18 and it made her pay heed o the voices around her. “There were several people, my confidants, and people that I trusted, told me that it probably wasn’t a good career path because of the fact that most people with spinal muscular atrophy lose the ability to breathe on their own, so they end up having to be on a ventilator. Being 18, an inexperienced child, I let that fear take me over,” she said.

It would take another twelve years before she broached the idea of pursuing that OSU music degree. During that period she had completed her degree at Rogers State University and moved to Colorado following her marriage. Later she got divorced at the age of 34 and was looking to do something new and that's when she started mulling over the idea of pursuing singing. “In 2016, I said, ‘Alright, I’m going to do it.’ I was told not to do it when I was young and when I was scared, and I was no longer young and no longer scared,” said Williams. “It is really important that I’m doing what I’ve always wanted to do. Just being older, and there’s more representation of people with disabilities in the music industry. Representation really matters, and I really wanted to be that person for someone else. Because I was the first full-time wheelchair user in the OSU music program.”

One of the main factors that helped her is the recently approved FDA at-home treatment for spinal muscular atrophy called Evrysdi. It has enabled her to regain some of the movement she had lost during the past five years. "As I went to school, I noticed my hands weren’t working quite as well, I couldn’t hold a pencil and take notes in class like I used to be able to. At this point, only two weeks into the medication, I have gotten back all of those movements that I lost over the past five years," she said. She credits her mother for constantly pushing her to do things. "She always said, ‘Well, nobody is going to do it for you, so you have to do it yourself.’ She made me the advocate that I am today, and I don’t think I would be as strong and be able to do the things that I do,” said Williams.

Allie Williams described eating by herself as one of the liberating feelings she's had. "I have not choked one time since I started the medication. I can feed myself again. I don’t have to rely on someone else to shove food in my mouth anymore," said Williams. The medicine has also helped improve her capacity to sing. “When it comes to my singing, I’ve already noticed a big jump in being able to hold a note longer; I can sing four or five songs in a row without taking a break. Before, I had to take a break in between each song. Having a disability does not define you as a person and only helps you grow," she said.

Disclaimer : This article is for informational purposes only and is not a substitute for professional medical advice, diagnosis, or treatment. Always seek the advice of your physician or other qualified health provider with any questions you may have regarding a medical condition.