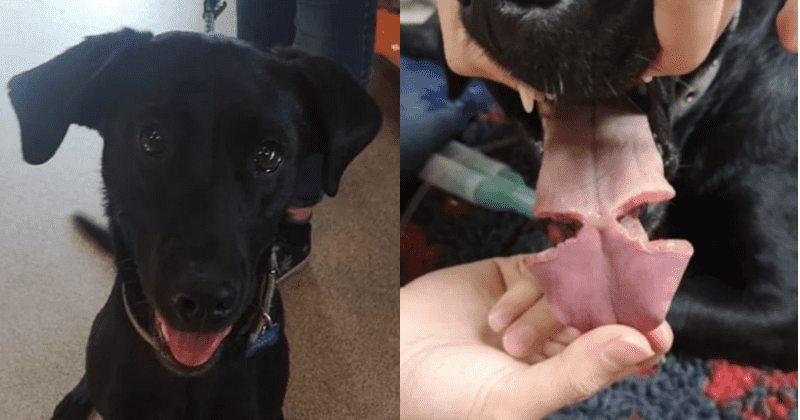 Trigger Warning: The story contains graphic pictures of a dog's injury that readers may find disturbing

When not playing with their owners, dogs like chewing on things like toys. But is this safe for them? One couple from the UK and pet parents to a labrador retriever found out that even those meant specifically for pets may prove dangerous. Their dog named Poppy was left all alone at home. When Helen and James Hartley came back they found the dog in a great deal of pain. She had got her tongue stuck in the hole of a rubber ball she frequently played with. The ball was known to be her favorite toy. The couple worked to set her tongue free and finally managed to do so. But the dog's troubles were just starting. The owners noticed their Poppy was acting strange and they decided taking her to a vet would be the best thing to do. They went to the Foxhall Veterinary Clinic in Ruskington, Lincolnshire. Poppy was sent home after being treated and with some medicines.

She had to go back to the clinic the next day after her condition worsened. Her tongue began to emit a foul odor and the portion of her tongue that was stuck to the ball became grey as if it was rotting away. “Unfortunately, the red line gradually changed into bruising, the bruises then started to smell and formed white plaques on top, which eventually turned black, necrotic, and died off. Poor Poppy was left with two great big slits on either side of her tongue where the ball had been and was struggling to eat and drink because of this, so she was booked in for surgery with Sophie our Vet!” the clinic wrote about Poppy's condition in their Facebook page according to IHeartDogs. The animal received an emergency surgery where the necrotic parts were removed and her tongue stitched of.

Pictures of the sutured tongue of the dog was also shared by the clinic as a caution to other pet owners. The couple thanked the staff at the hospital who treated their pet. “It was really traumatic for us all. Thank you from the bottom of our hearts for looking after Poppy. She’s been so well-loved by everybody at the surgery and we couldn’t have asked for a more dedicated team. Well done to you all, Poppy sends sloppy kisses,” Helen said. The animal took a while to fully recover and eat and drink normally. But thankfully the problem was identified before it got much worse. The clinic added, “We’ve all grown very attached to Poppy here at Foxhall and we will miss her daily visits. Poppy’s owners wanted us to share her story to highlight the dangers of leaving your dog unattended with toys, no matter how innocent they seem."

A lot of people like Kathy Luciano Webster commented about wanting to know what toy caused such an injury. She wrote: POST. THE. TOY. THAT. DID. THIS.....geez!!! Not a very good post if you're going to leave THE MOST IMPORTANT part off. Ask the owners, I'm sure they can tell you!!! Another commenter named Rachel Diamond wrote: After being traumatized by the pictures you have not mentioned what toy caused the damage...? Others like Heather Roberts were just glad the dog was okay and wished her well. She stated: Oh, it must have been so painful for him and traumatic for you both. Hope the rest of his tongue heals quickly. Tonya Armstead commented: Poor baby, happy she's ok now, thank you to the vet for saving her.