The National Park Service erected a fence around Lafayette Park to protect the statue of Andrew Jackson. 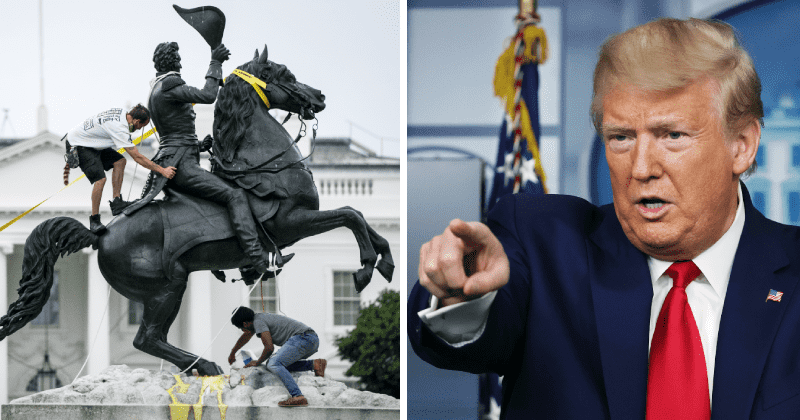 Trigger warning:  The story has details of race-motivated violence that readers may find disturbing

President Donald Trump has warned protestors that they would be dealt with seriously, and jailed if they attempted to bring down statues on federal property. He made the comments after protestors tried to take down Andrew Jackson's statue in Lafayette Square at Washington DC. Trump's warning came as Black Lives Matter protestors defaced the former President's statue, which continues to remain firmly planted on a pedestal outside the White House, reports NBC News. Donald Trump called the protestors hoodlums, adding that they "don’t love our country." In the wake of protests that broke out following George Floyd's death, statues of figures with a history of oppression against the Black community are being torn down. The statues of George Washington and Chris Columbus have also been torn down in various places across the country.

Trump said that law enforcement stopped the "great monument" from being torn down and added that "numerous people are in jail and going to jail today." Trump, who has expressed admiration for populist Andrew Jackson in the past, once describing him as a "swashbuckler," said that he would do what it takes to ensure the statue wasn't taken down. "We are looking at long-term jail sentences for these vandals and these hoodlums and these anarchists and agitators and call them whatever you want. Some people don’t like that language, but that’s what they are," said Trump. "They’re bad people, they don’t love our country, and they’re not taking down our monuments."

“I mean, do you think Andrew Jackson was a good man?”

This is how you answer questions about honoring slaveholders 🔥(& how to flip a Q back on interviewer)#BlackLivesMatter #DCProtests pic.twitter.com/xMnbqMPN4R

While Trump admires the former President, there's no question that  Andrew Jackson has chequered past. The seventh US President was a slave owner and was often referred to as the "Indian killer" for his role in the ethnic cleansing of Native Americans. Jackson signed the Indian Removal Act on May 28, 1830, which forced more than 60, 000 Native Americans to leave their land, making way for colonizers, the white people, according to The Washington Post. The Native Americans were forced to walk hundreds of miles to resettle west of the Mississippi River, with more than 15,000 of them dying en route from exposure, disease, and starvation.

The Act was used multiple times to colonize the land of Native Americans. Cherokees were forced to vacate their land in 1838 and 1839. "Established in the midst of a superior race, they must disappear," observed Jackson. Over 4,000 Cherokees died during their resettlement process, which came to be known as the "Trail of Tears." The Cherokees referred to Jackson as the "Indian killer" while the Creek called him "Sharp Knife."

With history being written by victors, there's no surprise that America celebrates slave owners, colonizers, and plunderers. While the Black Lives Movement is trying to reclaim their own history and acknowledgment of the abuse meted out to their community, Trump, backed by a system rigged to favor the white population, is keen to ensure history doesn't paint the white population in poor light. "They're tearing down statues, desecrating monuments and purging dissenters," said Trump of the protestors, at a 'Students for Trump' conference. He called it "the behavior of totalitarians and tyrants."

The Trump campaign organized a 'Students for Trump' conference days after K-Pop fans and Tik Tok users claimed to have pranked the President's campaign into thinking more than 100,000 people were going to turn up for his rally at Tulsa. The Tulsa fire department reported that not more than 6,200 people had turned, leaving Trump to address his supporters in a rather empty venue that was built to host 19,000 people. The President was furious that his first rally after the reopening amidst the pandemic didn't live up the grandeur that he had envisioned.

D.C. protesters tried to remove this statue of Andrew Jackson before police attacked them with pepper spray and batons pic.twitter.com/lFoG3FBr1K

Interior Secretary David L. Bernhardt said it was "another 'so-called peaceful protest' led to destruction tonight." He added that the statue was being protected. "Let me be clear: we will not bow to anarchists. Law and order will prevail, and justice will be served," said Bernhardt, referring to the protestors as criminals. A National Park Service spokesperson confirmed that authorities had used pepper spray at Lafayette Park "to disengage the protesters from the statue and clear the area." On Tuesday, the National Park Service (NPS) erected an 8- to 9-foot fence around Lafayette Park. Katie Liming, a Park Service spokesperson, stated the park would be temporarily shut down. "Lafayette Park will be closed while the NPS assesses the damage and begin to make repairs to statues and other park resources," said Katie Liming. Andrew Jackson's statue is based North of the White House, which was also built by slaves.