The former President pushed lies that the election was rigged as the crowds at his resort cheered him on. 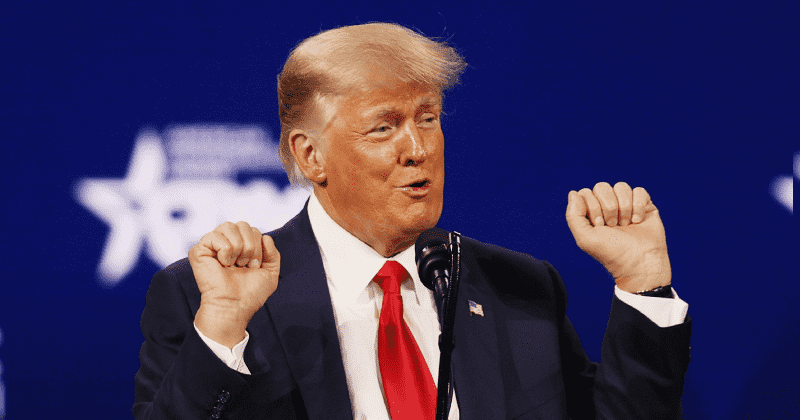 Former President Donald Trump made a guest appearance at a wedding event at Mar-a-Lago, his Florida resort, and turned the wedding toast into a long rant about Joe Biden's foreign policy, the apparent border crisis, and his election loss last year. Trump has been starved of a platform since he was banned from Twitter but he certainly wasn't going to let go when he was presented with an opportunity to address a captive audience. Trump also continued to push false claims that the election was stolen from him. According to a video published by TMZ, Trump had to get through a 400-worded rant before finally getting to toast the couple getting married. Trump wasted no time as he dove straight into the issues that appeared to bother him.

The Biden administration has been struggling to deal with the rising number of immigrants making it to the southern border over the past month. The media, especially the right-wing eco-system, are starting to provide wall-to-wall coverage of the border situation. Trump touched upon it during the speech. “You saw what happened a few days ago, was terrible, and uh, the border is not good, the border is the worst anybody’s ever seen it, and what you see now, multiply it times 10, Jim – he’s the only one I know who would handle the border tougher than me,” said the former President though it was clear who was the 'Jim' he was referring to.

While Trump's administration was notorious for separating kids from their families at the border, he skipped over that. “What’s happening to the kids, they’re living in squalor, they are living like nobody has ever seen anybody, there’s never been anything like what’s, and you’re gonna have hundreds, and you have it now, they have the airplane photos, the shots, and they call ’em shots, and these things are showing thousands and thousands of people coming up from South America and it’s gonna be, it’s just uh, look, it’s a disaster,” said Trump. “It’s a humanitarian disaster from their standpoint, and it’s gonna destroy the country."

Trump then asked the crowd, "Do you miss me yet?’” The crowd at the Mar-a-Lago cheered for the former President and gave him a round of applause. Despite losing the election, and the many 'conspiracy theories' surrounding election integrity proving to be nothing more than just that, Trump claimed again, that the election was stolen from him. “We did get 75m votes,” Trump told the audience at Mar-a-Lago. “Nobody’s ever gotten that,” said Trump, before adding, “They said, ‘Get 66m votes, sir” – a fraction more than Hillary Clinton got when she beat him in the popular vote in 2016 – “and the election’s over.’ We got 75m and they said … but you know, you saw what happened,10.30 in the evening, all of a sudden I said, ‘That’s a strange thing, why are they closing up certain places, right?’

He finally turned his attention to be bride and groom and wrapped up his speech. “Now, a lot of things happening right now. I just wanted to say, it’s an honor to be here, it’s an honor to have you at Mar-a-Lago, you are a great and beautiful couple … have fun.”