The anecdote is just one of many shocking details that Grisham has revealed in her upcoming book I’ll Take Your Questions Now: What I Saw at the Trump White House. 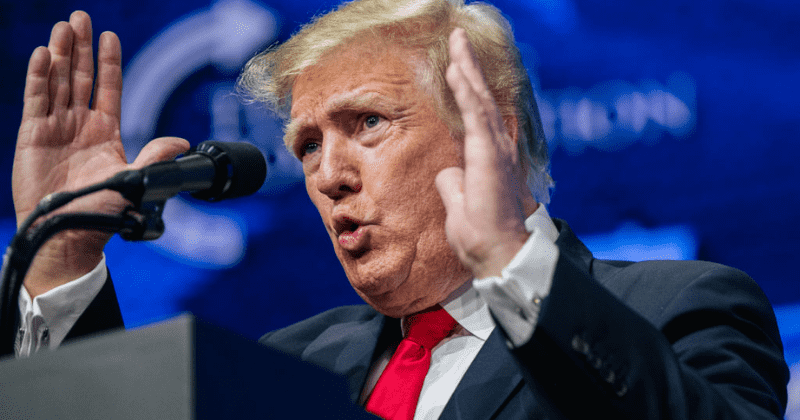 Former President Donald Trump was not at all impressed when adult film star Stormy Daniels described his penis as "a toadstool" three years ago. He's surely not happy now when his former White House press secretary Stephanie Grisham revealed what he did after the news came out. "I lay there, annoyed that I was getting f***ed by a guy with Yeti pubes and a d*** like the mushroom character in Mario Kart," wrote Daniels in her 2018 book which details her alleged affair with Trump. Upset about the comical description, Trump felt the need to call his then press secretary from his Air Force One just to inform her that his manhood was neither small nor shaped like a toadstool. "Uh, yes sir," she replied to his ghastly information. The anecdote is just one of many shocking details that Grisham has revealed in her upcoming book I’ll Take Your Questions Now: What I Saw at the Trump White House, as per The Washington Post.

In a new tell-all book, Stephanie Grisham revealed that former President Donald Trump defended the size and shape of his penis after Stormy Daniels described it looking like a “toadstool.” https://t.co/RaosGcslj4

The longtime White House staffer further revealed that the 75-year-old objectified a press aide on Air Force One after demanding her presence just so he could "look at her [behind]." He even asked Grisham to promote the young, unnamed aide and "keep her happy. Unfortunately, Grisham claimed she has also been subjected to harassment by Trump who once asked her former boyfriend, Max Miller, if she was good in bed. In yet another incident, which happened after magazine columnist E. Jean Carroll claimed that the former Commander-in-chief rapped her in a department store in the 1990, Trump slandered Carroll when she came forward with her truth. According to Vice, Grisham was left unsettled with his constant denials about the rape allegations that were made in the lawsuit.

"Ms. Grisham writes that Mr. Trump called her while aboard Air Force One to defend the size of his penis after Ms. Daniels insulted it in an interview. “Uh, yes sir,” Ms. Grisham replied.”https://t.co/Coo78Hll8C

"You just deny it," Trump allegedly told her. "That’s what you do in every situation. Right, Stephanie? You just deny it." Grisham also spills some details about Trump's hair routine, including the claim that he cuts his own hair. "[Trump has] a huge pair of scissors that could probably cut a ribbon at an opening of one of his properties," she revealed. The 45-year-old, who joined the campaign in July 2019 as a press secretary, never held a single press conference during her 12-months of service that lasted until April 2020. After this, she resumed her previous role as press secretary to the former FLOTUS Melania until her resignation on January 6 January 2021, following the Capitol riot.

Former Trump press Secretary and Melania Trump chief of staff Stephanie Grisham outlines a whole lot of vivid anecdotes in new book. The book is a pretty damning portrait of her former bosses. ⁦@jadabird⁩ and I read it: https://t.co/OWiUtOqXOb

"It has been an honor to serve the country in the White House," she said at the time. "I am very proud to have been a part of Mrs. Trump's mission to help children everywhere and proud of the many accomplishments of this administration." Her book, which will be out next week, has not been received well by the Trumps as their press secretary called Grisham a "disgruntled former employee." As for Melania, her office said "The intent behind this book is obvious. It is an attempt to redeem herself after a poor performance as press secretary, failed personal relationships, and unprofessional behavior in the White House. Through mistruth and betrayal, she seeks to gain relevance and money at the expense of Mrs. Trump," according to Daily Mail.

Per Yahoo News! Trump’s spokesperson Liz Harrington said Grimsham's book was "another pitiful attempt to cash in on the President’s strength and sell lies about the Trump family." Describing her as a disgruntled employee, Harrington slammed the publishers saying they "should be ashamed of themselves for preying on desperate people who see the short-term gain in writing a book full of falsehoods."